The Sparrow by Marry Doria Russell

Get it on Amazon

Sometimes you read a book, and it leaves a bad taste in your mouth. Not because it was bad, but because the story is so depressing and/or disturbing that it makes you feel dirty. The Sparrow by Marry Doria Rusell is a book like that. It’s dark, sad and depressing – but it is also a damn good read.

Much like Embassytown and Blindsight this book also introduces us to a brand new alien breed. Marry Doria Rusell’s aliens are nowhere near as bizarre as strange as those made up by China Mievile or Peter Watts. In fact, initially they seem rather plain and uninteresting. They are more or less a colorful background to a human interest story. A colorful background which eventually turns into a blunt instrument used to smash the protagonist into pieces, only to slowly and painstakingly put him back together.

The protagonist, Emillio Sandos is a Jesuit priest – a distinguished linguist, social butterfly and a hard working man of God. While completely committed to his path, and the tenants of his church, he is struggling with his own faith and searching for a personal calling. While helping untold number of souls to find God, he never experienced the divine grace himself. At least not until one fateful night when his close friend working at a SETI laboratory detects an alien transmission and decided to share it with him.

The alien signal originates somewhere in Alpha Centarui, in a system 7 light years away on a closest approach. The contents? Audio transmission of what appears to be singing – beautiful, unearthly and very melodic. Upon hearing it, Sandoz finds his calling and his purpose – he decides he will make the first contact. Over his career he has made enough connections to assemble a crack team of specialists – astronomy, aerodynamics, artificial intelligence, navigation, biology, etc.. He starts making plans, and pulling strings within the Jesuit society.

The US and UN are understandably apathetic. While the alien singing gets a lot of attention, there is much resistance to actually launching a manned mission to this alien world. Even attempts to pass any kind of resolutions toward unmanned missions are stalled at the level of sub-committees. Jesuits, work faster. Within a week a decision is made and receives Papal blessing. A privately funded manned mission under Jesuit oversight is a go.

The mission seems blessed, as if by the hand of God – lucky coincidences mount to speed up the schedule, right people stumble into the project, at the exactly appropriate times, and few if any planning mistakes are made. The crew consists of 8 people – four Jesuits (Sandoz among them), four lay men – all highly trained specialists in their respective fields. The launch is a success, the trip is a breeze, landing is textbook perfect and first contact is made. Initial reports are overwhelmingly positive – local population is friendly, peaceful and welcoming. Sandoz is on fire, making great progress learning the alien tongue and establishing routes of communication. His entire life has lead up to this monumental first contact work – he os filled with purpose. His crew mates and superiors quip that Sandoz is more or less constantly “drunk on God”. 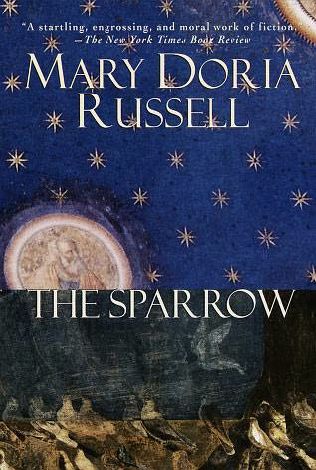 And then, something goes wrong. Communication with the Jesuit party is lost. A second mission already en-route suddenly becomes a rescue expedition. When they arrive they find the linguist a broken man. His crew perished under circumstances he is not willing to reveal. His body is disfigured, his hands destroyed by some strange surgical procedure – but that’s only the tip of the iceberg. His psychological state is even worse. When the rescue party has found him, he was stark raving mad, a convicted murderer and working as a prostitute at the alien equivalent of a whore house.

How did an inspired priest, and a respected scholar could fall so low? What happened to his party? How did he come to be a killer and a whore? These questions become part of the Jesuit inquiry upon his safe return to Earth. Initially Sandoz wants nothing to do with God, or the Jesuit society. He wants to be left alone, and die. But over time, bit by bit he reluctantly reveals bits of the shocking story of the mission. At first he talks only about the initial contact – about the uplifting experience of establishing communication, about the biological and psychological differences between the aliens and the humans. He avoids touchy subjects – like the time when communication was lost, the time when people started dying, or the reasons why his hosts saw fit to ruin his hands, and ravage his body with surgical precision.

While Sandoz is healing his psychological scars, and his superiors attempt to extract a full story out of him, the contact is lost with the members of the rescue mission who have stayed behind to establish trade relations with the aliens.

The novel is very introspective and psychological. Marry Doria Russell dives deeply into the psyche of the Jesuit space travelers, describing what exactly makes them tick. It is a very honest portrayal of Catholic priests as flawed men – struggling with their vows, and their commitments. While none of her characters have any intentions of leaving the priesthood, or straying from their chosen path, they are all fraught with doubts and all question their faith daily. They have no more answers to the existential questions than the lay-men who they are supposed to sheppard. The alien culture and society tests their resolve at every turn.

These priests are not the holier-than-thou born-again preachers you often see on TV. They are flawed men – each carrying a full set of skeletons in his closet. Which only makes them that much more interesting. Russell is not afraid to write about priests falling in love, or trying to reconcile ones homosexuality with ones faith that forbids it. Her characters are lovely, vibrant and very human. Nearly half of the book is spent developing them, showing them interact, bond and develop relationships – making sure they are fully fleshed out, before they even step on the soil of an alien planet.

When I was reading the book, I was actually getting a bit annoyed with the author for front loading so much character development in the form of flashbacks. I wanted to get to the meat of the story – I wanted to know what exactly happened to Sandoz and his friends. But she kept pushing that away, and by the time people started dying, she already made me care about that flawed, motley crew of space explorers and their constant humorous banter.

The book is dark, but not devoid of humor. It is depressing, but also very ironic. If you happen to have a stick up your ass about religion, you may find it’s portrayal of Jesuit priests as flawed men rather than paragons of virtue a tad controversial. But it is worth reading – if nothing else, just for the deep, murky, slap-in-the-face irony of the ending. It will probably bum you out for a few days so I recommend chasing it with something more cheerful.


3 Responses to The Sparrow by Marry Doria Russell