X-COM is not a video game – it is digital crack cocaine. It will suck you in. It will keep you up until 4am on a weekday. It will make you mutter “just one more turn, just one more spin of the globe” under your breath. It is almost impossible to put down.

This may come as a surprise to some of you but I have never played the original X-COM games in the 90’s. I know, I know – I should turn my gamer card in and hide in a corner out of shame. I’m not really sure how I missed the original series but I did. Most likely reason? I never fancied myself a strategy gamer. Thus, this particular series being all about tactics probably did not excite me that much. Little did I know that the series will one day become a cultural icon of the gamer culture.

I picked up the newly released re-make in the large part to make up for foolish mistakes of my youth. Everyone and their uncle were raving about it, saying how it captured the spirit of the original games without dumbing down the game play too much. So I figured it was time for me to experience the X-COM phenomenon first hand.

Verdict? People who said this game was good were absolutely right. X-COM: Enemy Unknown is a lot of fun. And when I say a lot, I mean that it is a big-ass, 18-wheeler truck load of enjoyment. You start playing it, and you can’t put it down. Up until recently people used to call this the Diablo effect, but then Blizzard released Diablo 3 which definitely proved they forgot how to make that effect happen. I also heard it described as “the Civilization effect” (one more turn, one more) or just the MMO syndrome (5 more minutes). Whatever you call it, X-COM has it. The game simply does not have a good stopping point.

In most games you can clear a level, defeat a boss or build something and then go “well, that’s it for today – I will pick it up there in the morning”. In X-COM there is always something to do. When you are out on a mission, you don’t want to stop in the middle of an engrossing firefight – especially when one of your men has an exposed flank, or needs to be healed. When you finish a mission and go back to your base you realize you just hauled back a bunch of artifacts that need to be researched and cartload resources that you can use to build better guns and armor. Each research path unlocks new items to be built, and as soon as you build them you want to test them in the field again. It is a vicious cycle.

Soon it is 4am, and you decide to spin the globe one more time because in 4 game days you get funding for those Titan Armors you just researched, and you can totally kid your squad out. And then a UFO appears and you’re like “fuck, I guess I’m not sleeping today”. It is that kind of a game. There is always something else on the horizon that you are looking forward to. Each new thing, leads into another, and then another. Only very late in the end-game when you have exhausted all research paths, bought all the foundry upgrades, have full satellite coverage, good air power and top tier for your favorite squad and back-ups, you get a breather. But the only reason you would ever get to that point is because you’ve been procrastinating and not initiating the final mission in lieu of grinding for money and resources. 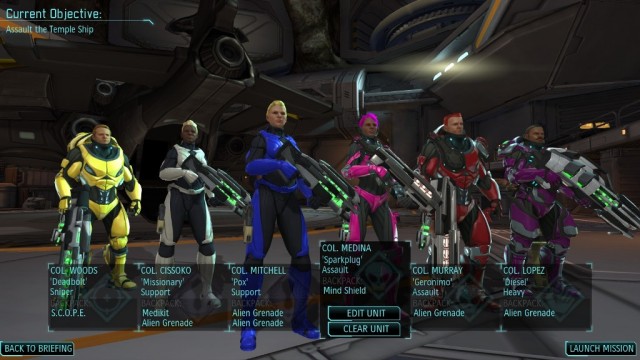 Not that it does not have flaws mind you. The whole alloys/elirium mechanic can be quite unclear – unless you carefully read your “loot” reports after each mission you might completely miss the fact that these important resources necessary for building just about everything in the game can be obtained only from crashed/landed UFO’s. I wish there was a way to pro-actively farm/extract these resources without waiting for a randomly generated UFO event, but alas, there is not.

Similarly I wished there were more weapon/armor tiers. After getting most of my team in to Titan armors (except for snipers who got Archangels and assault who got Ghosts, and psykers who got Psi) and plasma weapons I found myself with loads of cash and nothing more to invest it into. I was also quite annoyed I couldn’t upgrade the “brown” rocket launcher into something plasma related with blinkenlights.

I also managed to break the save system. I guess no one at Firaxis ever heard about save scumming like a fiend. If you make it a habit to save on each turn, and before every “scan” while also using auto-saves you can get to a point where new saves no longer appear on the load screen. The games are still saved, but those saves can’t be accessed until you delete a few dozen saves.

But these are merely small annoyances that probably ought to be mentioned, but which do not impact the overall experience in any meaningful way. With the exception of the save thing – I can’t believe that did not turn up during beta testing. Then again, I have seen way worse bugs slip through the cracks (*cough* Bethesda *cough*).

Another interesting point is that I think I learned something new about myself just now. I like this turn based squad combat thing. I was never a huge fan of RTS games – that genre just doesn’t speak to me. But this turn based experience where you can ponder and agonize about every move, plot and strategize for hours – that’s right up my alley.

I feel that X-COM implementation was really good. I have seen the UI from the original games and it looked overly complex. The re-make managed to streamline mechanics and drastically simplify the interface without loosing much of the core game play. There is still a lot of strategy involved but moving you soldiers and using their abilities is very intuitive.

Now that I tried turn based tactical squad combat, I want more of it. I wish there were other modern titles like this on the market right now. Sadly it seems that turn based strategy went the way of point and click adventure games – it became nearly extinct, kept alive only by occasional indie releases and one or two franchises that were too profitable to kill off.

Yes, there are dozens of older titles that use X-COM like mechanics that I could revisit. In fact, that’s probably what I will do. Do you have any suggestions?. What I’m hoping for though, is that the success of X-COM will re-invigorate the market and renew people’s interest in turn based squad combat. We have crap-loads of RTS games out there, and civilization clones – maybe its time for some new X-COM style games.

In the comments post a link to a screenshot of your favorite X-COM squad like the one I posted above.