I’m a software developer, currently mostly working with Ruby, Python & Node for fun and PHP for money. I have an MS in Computer Science and I sometimes teach an introductory technology class a university.

I’m a platform nomad ( ), a Vim user (sorry, not sorry) and a LaTex enthusiast. 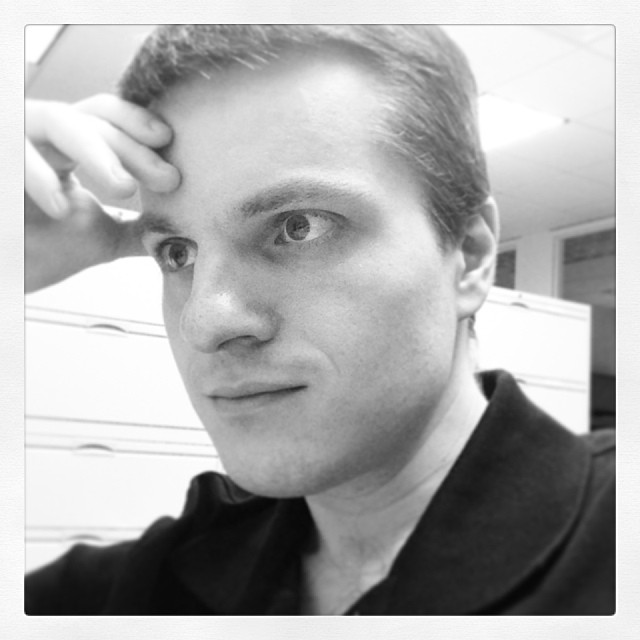 Because it is nice to put a face to the words, here is a picture of me.

If you are interested, you can find out more about me here: maciak.net

Q: Favorite shell?
A: Bash. One day I will make the jump to Zsh. Today is not that day.

Q: Preferred operating system?
A: I use Linux for work and on production servers. My gaming desktop is running Win7. My laptop is a MacBook.

Q: Favorite Linux distro?
A: Ubuntu if I have the hardware for it. Debian when I want lightweight system.

Q: Favorite unix?
A: Based on use, probably OSX. I do have one FreeBSD server and have fond memories hacking on Solaris SPARK machines back in college. My thesis was written and coded in large part on Solaris 10 running Java Desktop System.

Q: KDE or Gnome?
A: I used to be a huge KDE fan, but they both kinda suck now. Currently running Gnome because I hate Unity.

Q: Mobile platform?
A: I use iPhone 6 and 3rd gen iPad. I used to be a die hard Pebble user but these days I rock an Apple Watch. Really wanted Google Glass but I couldn’t justify dropping so much cash on it and then they discontinued it. So now I may never have a personal HUD IRL.

Q: apt-get or aptitude?
A: aptitude

Q: Preferred blogging platform?
A: Jekyll is fun, but I get most use out of WordPress.

Q: What do you do for living?
A: I write awfully terrible PHP code mostly.

Q: Any tips for people who want to get into PHP?
A: Don’t. But if you must, PHP The Right Way is probably a good start.

Q: Why is your name spelled weird?
A: I’m Polish. Was born in Warsaw. I’ve been living in New Jersey since roughly ’98.

Q: Can I read your thesis?
A: I’m actually not sure who owns the copyright for that, but you can read these published papers based off that research.

Q: Favorite movie?
A: Uh, this is hard. The one movie I can watch over and over again and it never seems to get old is Fifth Element. It is super cheesy, but in an epic and awesome kind of way.

Q: What the hell is a Tuxmentat?
A: It is a portmanteau of the words Tux (ie. the Linux mascot penguin) and Mentat (a living computer from Frank Herbert’s Dune series). Here, perhaps an illustration will help: 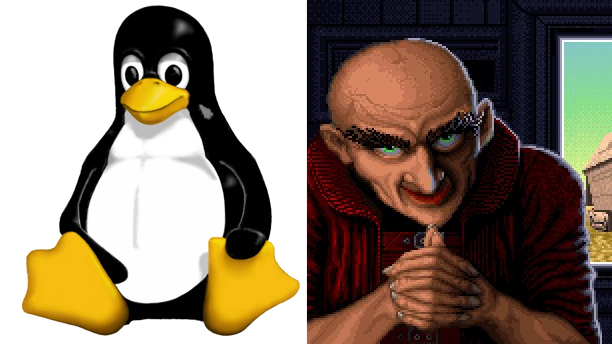 Q: Do you play tabletop games?
A: Yes, I play Warmachine (Retribution) and Malifaux (Arcanists). I used to play a lot of Warhammer Fantasy Battles (8th Edition, Age of Sigmar is garbage. I have roughly 4,500 point Dwarf army mostly made up from vintage 80’s era Marauder miniatures. I started collecting it in the 90’s long before good plastics and Failcast. I also have roughly 2,500 points of Skaven and Dark Elves. I dabbled in Necromunda, Mordheim and Warhammer 40k though I don’t really have miniatures for any of these.

Q: How do you paint miniatures?
A: Citadel paints and P3. I don’t fuck around with oil based stuff. Too much clean-up and brush care. Haven’t painted in years though so I pretty much forgot everything.

Q: Do you play CCG’s?
A: . I dabble in Magic the Gathering these days, though I’m not super serious about it. I also play Netrunner from time to time. I still have a deck for now defunct Middle Earth: The Wizards though it is by no means competitive.

Q: Do you play pen and paper RPG’s?
A: Yes. Currently playing D&D (5th Edition). You can read about our campaign here. Used to play a lot of Warhammer Fantasy RPG, Star Wars D6, Mutant Chronicles, GURPS and Vampire: Masquerade. t I’d love to run something using FATE Core. Also, some time ago I saw people playing Dogs in the Vineyard but using Firefly verse as a setting, and I’m literally dying to try that.

Q: Favorite board game?
A: Hands down Lords of the Waterdeep. I also like Betrayal at the House on the Hill, Talisman and Space Hulk.

Q: Favorite video game of all time?
A: Probably Morrowind.

Q: Do you play any MMO’s?
A: Not currently. Used to play Guild Wars and WoW but got bored of them.

Q: Favorite WoW race and class?
A: I pretty much just played Taurens and Trolls. My first character was a hunter (yes, I know, stfu), and I also leveled a Troll druid pretty high when that became possible. Never actually reached end-game.

Q: Horde or Alliance?
A: Horde naturally. I never had an alliance character.

Q: What comic books do you read?
A: Used to inhale The Amazing Spiderman in late 80’s and early 90’s when Venom first showed up, Peter was married to Mary Jane and none of the stupid clone shit was around yet. I was also really into The Uncanny X-Men. In High School I was obsessed with Yukito Kishiro’s Battle Angel Alita series and stuff by Rosiński & Van Hamme duo (like Chninkel and Thorgal series). Few years ago I picked up Neil Gaiman’s Sandman and Transmetropolitan. Currently I’m subscribing to Saga, Prophet, Rat Queens, Preaty Deadly and Bitch Planet.

Q: Favorite superhero?
A: Rogue from X-Men. The bad-ass comic book version, back when she had Ms Mavel’s powers and could fly and punch cars into orbit.

Q: If you could have one superpower, what would it be?
A: Nightcrawler’s blink teleport. Blink powers are so OP my former GM banned their use in GURPS campaigns due to rampant abuse. That said, Wolverine’s near-immortality would be nice too.

Q: Do you watch anime?
A: Yeah, sometimes I do. I like Cowboy Bepop, Neon Genesis Evangelion. Ghost in the Shell and Fullmetal Alchemist.

Q: What kind of music do you listen to?
A: The kind that’s on the radio. I’m really picky about my movies, TV, video games and literature but I have virtually no opinions about music. I mean, I’m aware that all pop music is basically the same four chords played at roughly the same tempo, but the music parser in my brain is so dodgy I hardly ever seem to notice.

Q: Can I add you on Steam?
A: Yes, definitely. I’m reset_by_peer. If I don’t add you back shoot me a message letting me know you’re from the blog and not a random pushy trader.

Q: Can we trade on Steam?
A: Sure, I might be willing trade cards and stuff. Send me a trade request and I’ll consider it.

Q: Can you make your Steam inventory public?
A: No. It’s open to friends though. Also, I think I sold most of the good stuff I had on the community market for cash.

Q: Are you on Xbox Live, Playstation Network, etc.
A: Nope, sorry. I don’t own any consoles.

Q: What multiplayer games do you play online?
A: Mostly Overwatch. Also I frequently drop my sign at Pointif’s in Dark Souls III. Summon me for a duel – I’m terribly awful.

Q: Favorite DOTA hero?
A: Best hero, probably Centaur. I like Sniper, Bloodseker, Drow and Nature’s $Profit. Don’t give me hard carries, or micro intensive heroes. If I random Invoker we gotta switch, cause otherwise I’m pretty much guaranteed to throw the game. I don’t know any of his spells.

Q: Are you a Trekkie, Browncoat, etc?
A: I was a full on Scaper back in the day. I did the whole 9 yards: forum drama, fan pages on geocities, fan fiction (no, you can’t read it), conventions, star-struck pictures with the cast, etc. Since then I tend to fan responsibly and from a distance. The downside is that I’m a fan of just about everything a little bit.

Q: Did you like Serenity?
A: Shut the fuck up, Wash is still alive.

Q: Moffat or RTD?
A: RTD all the way. He had goofy aliens, but solid character driven drama and good continuity. Don’t even get me started on Moffat.

Q: What do you think about Star Wars prequels?
A: What prequels? They only ever made 3 Star Wars movies.

Q: What do you think about the new Star Wars?
A: So far so good.

Q: How about Matrix sequels?
A: What? There were never any sequels.

Q: Did you like the Star Trek movie reboot?
A: No (with a lens flare).

Q: What do you think about Marvel Cinematic Universe?
A: Best thing that happened in Hollywood in years.

Q: What do you think about DC Cinematic Universe?
A: Take DC franchise from Snyder and co, please. Seriously, all the DC movies are awful.

Q: Who is your web host?
A: Linode. They are amazing. You should use them too.

I use social media (like all of them) so you can hit me up on any of these:

If you like this blog, join our Steam Community and let’s play some DOTA2 or TF2.