You might be interested to know that instead of tracking real criminals like murderers, rapists, serial killers, child molesters, drug dealers and terrorists most of FBI agents are way to busy chasing after Bitorrent tracker admins. Nothing makes me more proud of our law enforcement agencies than seeing them selling out their services to a corporate entities. 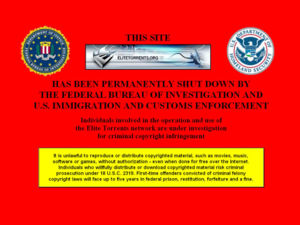 Who is your web designer? Cause the 80’s have called, and they want their awesum geocities web design skills back! Seriously, my dog can make a better fucking layout than this. You people are the fucking info-crime division or whatnot, but your page looks like it was made by a 12 year old script kiddie lamer. Get a grip!

The funniest thing in all of this is that they really got the wrong guy. The guy who leaked out the Revenge of the Shith workprint, created the torrent and started seeding it is not even mentioned anywhere. Instead they went after a guy who maintained the tracker. Let’s play the analogy game, cause this seems to be all the rage in all copyright related issues.

Let’s imagine that the Elitetorrents website is a crackhouse somewhere in NY. Instead of riding it and catching the dealers, and trying to get to their source FBI stakes out and arrests the landlord who is otherwise a law abiding citizen who lives half a world away somewhere in say Florida. Then they send someone back to NY to quietly change the locks on the door when no one is home and put up an eviction notice. All the drug dealers go free, movie in across the street and start over again. The only person who gets charged and sentenced is the poor guy whose only crime was turning a blind eye to what was going down on his property. This is precisely what happened in Elitetorrents case.

Does that seem right? Of course not. But in the digital world, catching all the uploaders and downloaders is not feasible. There are about 300 million potential file sharers in this country, and MPAA/RIAA would have to arrest every single one of them just to be sure.

So we end up with a situation in which people who are not really guilty get sentenced, and the real infringes just keep doing their thing. The system is obviously broken.

This entry was posted in technology and tagged copyfight, rant. Bookmark the permalink.


4 Responses to Tracker Admin in Jail