I wonder when will the general public finally figure out that someone with a degree in Computer Science is not a computer technician. The fact that I can and will fix b0rken computers as a personal favor for close friends and family, doesn’t really mean I learned to do that in school. I can’t tell you how many people are absolutely baffled to learn that I have never actually took a class on upgrading their RAM or cleaning out the spyware from their shitty laptop. Half of the people then scratch their head, and follow up with a question among the lines of “So… What exactly do they teach you at school…”. Then when you tell them they will invariably roll their eyes as people do when confronted with a stream of scary sounding terms and buzzwords. 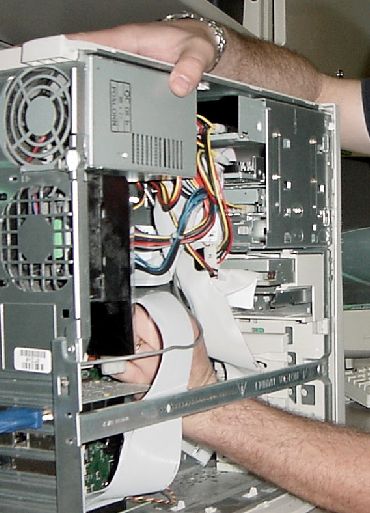 No, these are not my hands. This is random pic I found online.

Sure, it is usually safe to assume that someone who holds (or is working toward) a degree in CS will have above average knowledge of hardware and software, and might be able to help you with a problem. But that’s just because most of people who go into this field, are already interested in technology and love tinkering with this kind of stuff. But this is not always the case. Let’s face it, computer technician is pretty much a blue collar job that does not require higher education. At best, a company that specializes in troubleshooting and repairing personal computers might require a potential employee to take one or two certification courses. Most don’t however. Being a computer technician is really akin to being a car mechanic. So when you assume that one of us actually had to learn how to replace your RAM at school, is like assuming that an automotive engineer actually had a class on changing the oil in your car.

It’s kindoff funny when you think about it, but also a bit insulting that people assume that this whole branch of science is all about fixing their shitty computers. It’s funny that even though we are the people who develop algorithms and systems used by other branches of science, we get hardly any credit for it. Most of the people think we either fix computers or “make websites”.

Oh, and while I’m at it, here is a tip to proud parents whose son/daughter “works with computers”. Would it really hurt you to learn your kids actual job title, and nature of their profession? In my experience “working with computers” may mean just about anything ranging from project lead, software engineer all the way down to IT phone support drone.


27 Responses to Computer Science Degree Holders are not Computer Technicians