Dreamfall: The Longest Journey – Into the Uncanny Valley

I started playing Dreamfall: The Longest Journey after I saw it referenced on Shamus Young’s 20 Sided blog. He does have an oddly simillar taste in games, and his blog tipped me off on good games in the past. For example, if it wasn’t for 20 sided, I would probably never pick up Jade Empire which was lot’s of fun. He did write tons of positive things about this game, so I decided to check it out.

I love adventure games – they used to be one of my favorite genres. I loved them all despite many inherent flaws most of them shared, such as extreme pixel hunting, convoluted puzzle logic (or lack of thereof) and penchant for killing you in brutal ways for no reason (I’m looking at you Sierra). Sadly, they are a dying breed these days. You can still find some popping up here and there, but they are few and far between.

Last good adventure game that I played was Fahrenheit/Indigo Prophecy back in 2005. Btw, that was a great game with a great story – if you are looking for an adventure game to play, pick it up. Oh, and if you can, pick up the European version with teh sex and nudity intact. ;)

Dreamfall is a little bit different. Indigo Prophecy had those odd, reflex based sequences that would get your adrenaline pumping, and give the game more arcade, twitch based feel. The pace is much slower, and laid back here. While there are combat and stealth sequences, they are nowhere near as intense as the frantic button mashing in Fahrenheit. However the overall approach to the genre is simillar. Both games eschew the old adventure game staples that were abundant in the point and click games of old. There is no pixel hunting (all the interactive objects get highlighted when you get near), the inventory is kept small and functional (you never have to carry more than 2-3 items at the same time) and the puzzles actually make sense. Both games change things up letting you play as several different characters throughout the game, allowing you to experience the story from different points of view. Oh, and both were primarily designed for consoles. In Dreamfall mouse support seems to be an afterthought. Initially it’s actually very confusing, because mouse is not used for navigation, but for moving the camera around the character. It uses an inverted x axis which makes things even crazier, and there is no option to change this. You can get used to it, but it takes few minutes to figure it out. 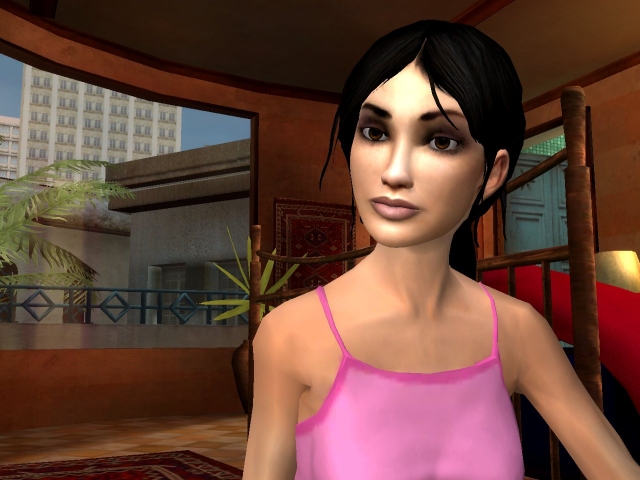 In addition, both cames games are more interactive stories than actual adventure games. They put more emphasis on the story, than on actual gameplay elements. This is especially true for Dreamfal which doesn’t actually have that much of actual engaging game play. Your task as a player is usually to transport the character between areas, occasionally use items or solve simple puzzles and fight an occasional bout of combat every few hours. Mostly though, you just talk to people. Depending on who you chat with, you may get 2 or 4 conversation choices, but you don’t get to actually pick the exact lines. You just vague topics suggestions or moral choices (as in for example: lie, tell the truth, politely excuse yourself and etc..). Once you pick an option, the game takes over and does the rest. So most of your time is spent to passively listening to the dialogs between characters. 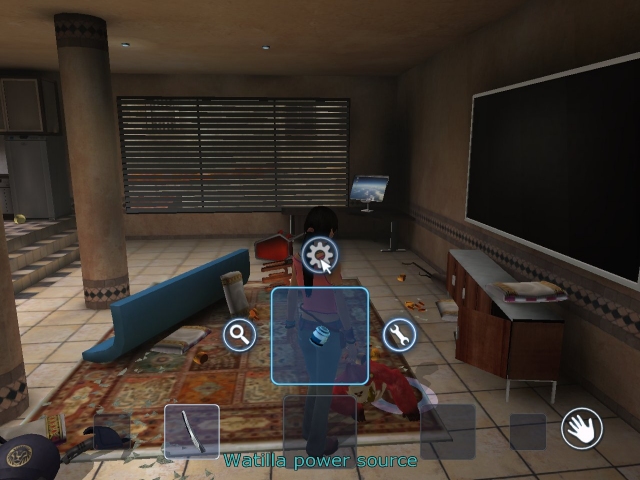 I thought that the voice acting in the game was a little bit uneven. Some characters come out really good – for example, I loved Crow and Charlie (the Club owner from Newport). Some where absolutely dreadful – for example, the bartender from the Inn was just getting on my nerves. So it’s a tossup – sometimes you enjoy it, and sometimes you wince as the sense of immersion fades away. I’m guessing all the lines were taped in solo studio sessions without the actors actually interacting with each other. In fact, I’m almost absolutely certain it was done this way. It’s kinda funny if you think about it. The script actually seems to be written with dynamic conversations in which characters interrupt each other. For example, here is what a typical piece of dialog from the game looks like:

Person 2: “Woha! Not so fast! Let’s talk about this first”

I’m serious – there are those weird pauses in between lines spoken by different characters. I don’t know if it’s a limitation of the game engine, laziness, sloppy editing or what. Some voice actors do a great job, concealing those things in different ways. Some just read the lines without even trying. There were few moments that I was put off by this type of thing.

My other minor complaint about the game is that it’s detailed character models land it smack dab in the middle of Uncanny Valley. The designers used just the right amount of realism, and polygonal blockyness to make them look ultra creepy. This goes doubly for female models which have odd shadows rendered around their eyes, and often on their upper lip. In effect they look as if they all had that fuzzy mustache thing going on and bags under their eyes. This is precisely why places like Pixar usually opt for cartoony look, and why the Final Fantasy movie was so weird to watch. This is also probably why people will be weirded out by the new Beowulf movie. There is just something about realistic human models that makes them weird looking and unattractive. 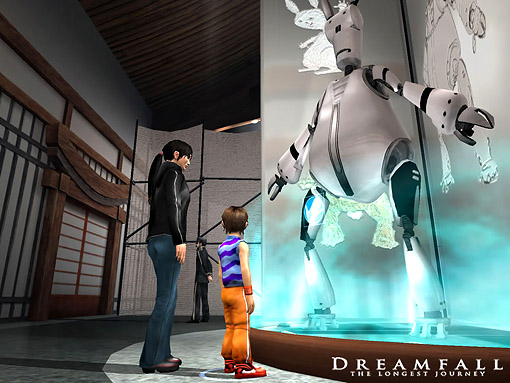 But all these small flaws fade away once you get into the story which is pretty good. Not as gripping as Indigo Prophecy, but very decent nevertheless. The plot moves relatively slowly, but you rarely need to backtrack or talk to the same people over and over again. It briskly takes you from location to location (all of them are very pretty btw) and gives you new places to explore. Most of the puzzles take form of built in quests. You find out what do you need to do, then you run around and talk to the right people who give you the right items. It’s easy, straightforward and always makes sense. You will be never walking around and using everything on everything like you would in most of the old school adventure games. The experience is very different, and you actually feel like you are involved in the story. In other words, while the immediate sub-quests, and minor plot elements unveil at a very satisfying pace, the core story seems to be movie quite slow. For example, I’m estimating that by now I must be somewhere past the middle point of the game, but I still have no clue what is the deal with that creepy girl that looks like she crawled out of The Ring movie. 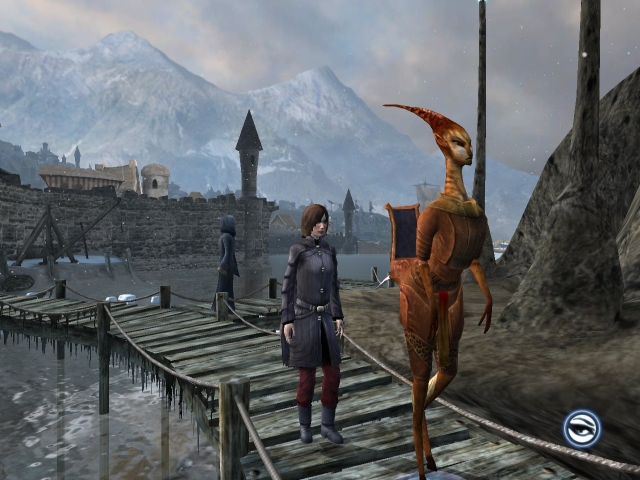 The main characters you get to control are complex and interesting if a little bit angsty for my taste. Zoe, is a rich, overprivileged brat – she has money, education, very influential father, supportive friends. But she somehow lost her drive and motivation, and instead of finishing her degree she just sleeps till noon, and watches TV all day, complaining how she just doesn’t care about anything anymore. But when her ex-boyfriend mysteriously disappears while investigating the biggest news story ever, she drops everything and tries to find him. Oh, and she is haunted by a weird phantom girl that appears on TV screens and tells her to save April Rayan.

April, the protagonist of the previous game seems to be tired of being the pawn of destiny, so when she is thrown into the middle of a new adventure she waffles, runs away from it, and changes her mind 50 times per second. It doesn’t help that she is currently involved in armed insurgency against overwhelming occupying force. Oh, and she is actually an inter dimensional traveler, and some chick named Zoe constantly shows up and insists that she was ordered by some a ghost girl to save her. 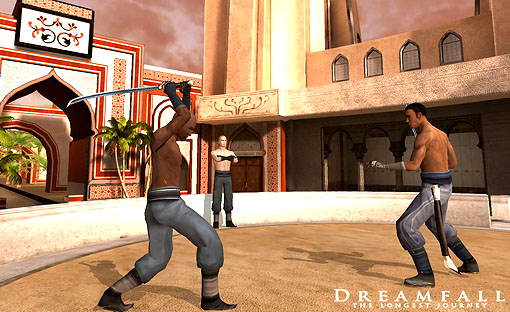 Kian on the other hand is a religious Zealot with a terrible flaw – a brain an a conscience. He is sent on a mission to a foreign land where his people are “enlightening” some unwashed heathens, but to his dismay he slowly discovers that these people not only don’t really need saving, but that the occupation is actually systematically destroying their culture and way of life.

I can’t tell you how many times I just wanted to slap April around and just fucking stop acting like a retarded psycho bitch with personality disorder, and perpetual PMS. The other two characters are actually likable. Zoe despite suffering from a bad case of “boredom” is actually quite capable, driven and inquisitive individual. Seriously, she might have been a mess at the begging of the game but when shit went down, she quickly got her shit together. April on the other hand, keeps folding under pressure, avoiding responsibility, then going on wild and dangerous quests despite declaring that she doesn’t want anything to do with this crap. Go figure. 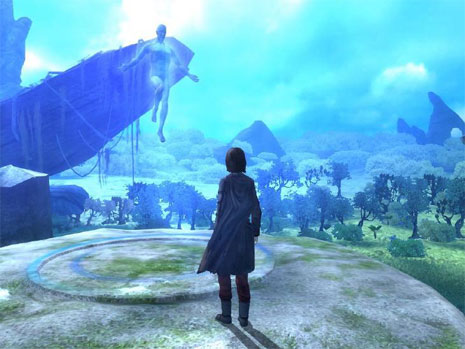 But anyway – they all have unique personalities, and whether they piss you off or make you emphasize with them they do stay with you and make you care about them one way or another. This also extends to the secondary, characters that you meet in the game.

Oh, I forgot., I guess I didn’t mention that Dreamfall is a sequel? It is part two to a game called The Longest Journey in which April was the main protagonist. Does it matter? Not really. I didn’t really notice that whole sequel thing until the game switched to April’s perspective and she ran into some old friends and started reminiscing about events that took place in the old game.. I don’t think I missed a lot by not playing it. .

All in all, I liked it. It’s a solid adventure game with a good story, interesting characters, and no usual gameplay annoyances whatsoever. Give it a shot, and you may like it too. :)


4 Responses to Dreamfall: The Longest Journey – Into the Uncanny Valley