Nausicaa of the Valley of the Wind

Some people don’t care for Anime at all, and some people are crazy about it. I personally do not belong to any of these camps. Just as with anything else, there is a some brilliant stuff out there, in the sea of absolute crap. Yes, despite of what some Anime and Manga enthusiast might be telling you, some of the stuff that comes out of Japan is virtually unwatchable. But I don’t write about that stuff here because I don’t usually watch it. 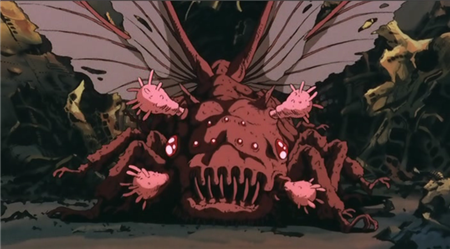 Nausicaa of the Valley of the Wind is one of classic Anime works that was widely acknowledged around the world and recognized by people who usually don’t watch any Anime. Case in point – 3 out of my coworkers admitted to seeing Nausicaa and Howls Moving Castle (both by Hayao Miyazaki and Studio Ghibli) despite never actually having any other exposure to Japanise animation. I also remember one of my professors saying something about Nausicaa after seeing me and my friend exchanging anime DVD’s. So this is a classic that somehow sneaked itself into public consciousness – and I haven’t seen it until now. So I decided to change that.

Just a small advice. If you do pick up this movie, watch it with the original Japanise audio and English subtitles. The DVD offers this as an option instead of the English dub, so I was able to compare both versions. Trust me, this is not just some sort of purist conviction that subtitles are superior. If you watch the same scene with English and Japanise audio you will see the difference. To me the original seemed stronger, more raw and emotional while the English was tad annoying. It had that “old Disney movie” quality to it which I personally didn’t like. 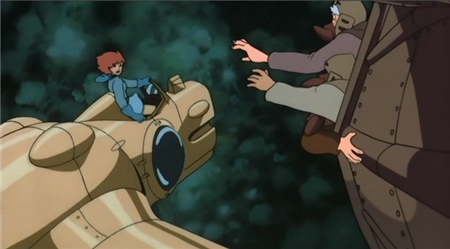 The story is actually quite interesting. A thousand years ago the earth was devastated by some cataclysmic war known as “Seven Days of Fire”. Now most of the planet’s surface is covered by a deadly toxic jungle populated by gigantic insects, while humans survive in small isolated pockets where the jungle didn’t reach yet.

One interesting detail I noticed were huge hulking skull like formations scattered all over the landscape. Initially I thought these were just aesthetic touches, but in fact they were petrified remains of enormous organic constructs called “God Warriors” that were used in the ancient war. Their silhouettes are shown in the opening credits, but you don’t put these things together until much later in the movie when it turns out that one of these things actually survived in a dormant embryo state. And that dormant embryo lands in the titular Valley of the Winds – an idyllic, peaceful village due to a freak accident. As the result, all shit breaks loose. Other nations want the weapon, valley gets invaded, crazy stuff happens. 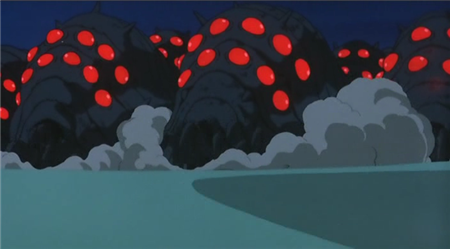 In the middle of all of this we have a likable, strong, brave and determined princess who has a unique gift of emphatically communicating with all kinds of creatures, including the huge insects from the toxic Sea of Decay jungle.

The core of the story is a strong ecological message. Quite predictably the jungle turns out to be something different than it appears to be. No one remembers exactly what happened during the “Seven Days of Fire” and even much less of what was before that. 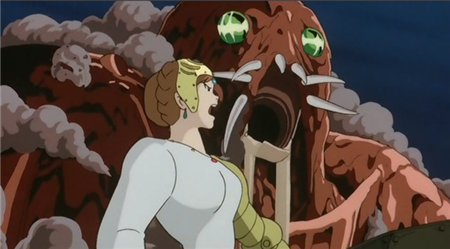 That time theme is particularly interesting to me. I always wonder how civilizations in the distant future will sift through the archaeological remains of current times, and make assumptions about how we lived. I think it would be hilarious to see a documentary on the 20th century produced 2-3 thousand years from now.

It’s a good movie and one that is definitely worth watching.

This entry was posted in movies and tagged anime, review. Bookmark the permalink.


9 Responses to Nausicaa of the Valley of the Wind