I saw Hostel yesterday so I figured I will subject you guys to a review of sorts. Yeah, I know, it’s an old movie (2005) but since I’m kinda short on material this is what you get for today. :P

The film doesn’t start as your usual slasher flick – in fact it it is reminiscent of the *trip movies (Eurotrip, Roadtrip, etc..) considering the amount of gratuitous nudity and sex and drug related jokes. We get introduced to the 3 protagonists: Paxton, Josh and Oli. who are backpackers on their own crazy Euro-trip. We meet them in Amsterdam where they proceed to get high, gawk at the prostitutes and then finally visit a brothel. They get a tip from another tourist to hit a little known hostel outside of Bratislava where they can meet tons of easy and willing girls. Apparently, because of the war, there is so few men in Slovakia that women there will throw literally themselves at foreign tourists. 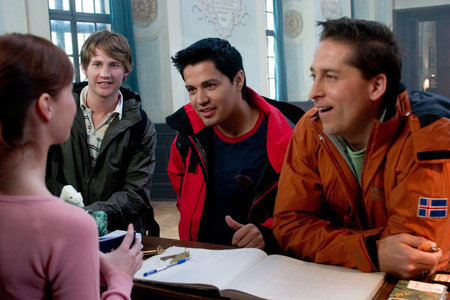 Funny they mention a war. Which war would that be? Slovakia haven’t been involved in any major conflict since WW II and if they haven’t replenished their male population since then, they must be doing it wrong or something. I’m guessing that maybe Eli Roth confused Slovakia with Slovenia or something like that. :roll: Oh boy…

But then again I guess I can’t expect geographical accuracy from a movie in which the main selling points are gratuitous violence, and gore. Or perhaps, that war comment was just a piece of purposeful misinformation, that was lost on the characters, but should tip off the audience that something is amiss? Who knows. It was either very clever, or very stupid…

This pretty much sets up the mood – there will be some more sex, more silliness and after that our heroes will start dying in brutal ways, at the hands of some invincible psychopath with face perpetually obscured by shadows or some mask. Or at least so I thought. I was mostly right, with exception of the psychopath.

The promise of sexual gratification is real enough. Our heroes arrive at a hostel, that is essentially a wet dream come true. I actually chuckled during the “spa” scene because it reminded me of the “idealized male fantasy of a girls locker room” scene from Road Trip. It’s the one at the beginning of the movie where Tom Green starts his story with a vivid scene of a locker room full of topless girls taking showers together. That was essentially the spa/sauna scene from Hostel, only they did seriously.

As expected, soon people start disappearing, and we get the sense that things are about to go wrong. We also get a glimpse of a faceless torturer in rubber boots and apron. But here is where Eli Roth breaks away from the rote slasher routine and does something more interesting. It turns out that there is no faceless psychopath on the loose. Instead we find out that the Hostel itself is a twisted business operation that lures in tourists who then become unwilling victims for thrill seekers willing to pay a hefty fee to take a human life. 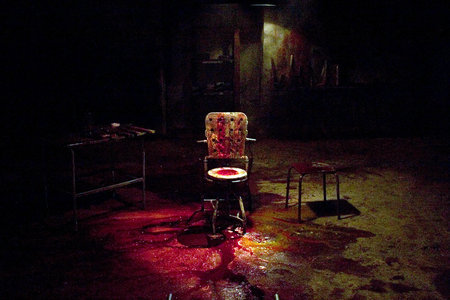 What is even more disturbing, is that every single character the leading trio meets during this movie is either working for the hostel, or just another victim. There are no random encounters, or side plots in this movie. Everyone is connected.

So who does the killing in this movie? We already established there is no central unstoppable bad guy. Hostel employs a whole number of murderers and they are all oridinary, frail people like you and me. We meet one of them early in the movie on the train where he shows the heroes a picture of his young daughter. There is some nervous German guy, and over the top American asshole, and some Japanese business man in a suit (who btw turns out to be a movie maker Mike Takashi whose movies were apparently Eli Roth’s inspiration for Hostel). They are not monsters made of steel.

The German is visibly shaken, and seems to be having second thoughts. He drops his tools, he slips on the blood and etc.. The guy from the train is mild mannered, soft spoken and completely non threatening. The American is a complete ass, absolutely bored with his life and looking for a thrill ride. They are people you could meet on a street (or in a train). Anyone could be a patron of this questionable establishment. 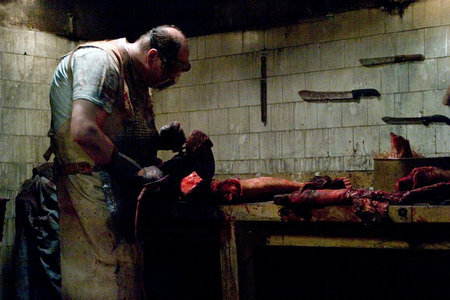 And here is the kicker – didn’t we just pay to see a movie about people getting brutally tortured in imaginative, and always gory ways? What does this say about us? We might think that the torturers from the Hostel are sick and twisted, but in a way we actually enjoy watching them work. We are all morbidly fascinated by death and suffering. We always were – from gladiatorial combat, public executions, to internet snuff films. We are both revolted by and inexplicably drawn to this form of entertainment. This is why people slow down and gawk at the wrecked cars on the side of the road. This is why we have shock sites on the internet devoted entirely to displaying graphic pictures of mangled corpses. This is why we have films such as Hostel.

We may not like it, but the difference between a normal person, and a sick individual who would actually use the service of the Elite Hunting company is not that great. This is only reinforced by the last scene in the movie, where Paxton exacts a brutal and bloody revenge on one of the train guy in a public bathroom. He doesn’t do this in self defense. Hell, the person he attacks isn’t even the same person who tortured him. He was tortured by the German, while the train guy tortured Josh. And yet Paxton mutilates his victim same way he was mutilated himself, before he kills him. This is not even a revenge for Josh. This is a cold blooded, premeditated murder. Paxton could have simply burst in there, and beat the shit our of the guy or just stab him quickly. But he takes his time, and chooses the most painful and brutal way to do it. He becomes a torturer, and his actions are not all that different from those of his victim. And yet he is the normal guy we were identifying with this whole movie. He is one of us.

This is the message of this movie. Yes, I believe that despite the shallow facade and gratuitous violence this film has a message. Eli Roth cleverly uses the sex and gore as a mirror that lets us look inward at the dark corner of our soul that exists, no matter how hard we try to hide it. The ability, and the desire to inflict pain and suffering seems to be an integral part of the human condition, whether we want it or not. Most of us are perfectly content to satisfy those dark urges by watching violent movies, or playing violent video games. In most of them, the heinous acts committed by some designated bad guy who we can all hate, and yet at the same time gleefully gawk at the carnage he leaves in his wake. But then he gets defeated in the end, the good natured hero prevails and we can all feel better about ourselves. The external evil was banished, the good and normal guys we identify with won and it was all awesome to watch. Boom, catharsis, let’s go home having our belief in goodness of human nature reaffirmed. 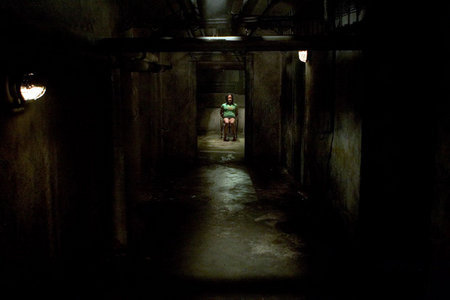 Not in Hostel though. Here we are left with a very ambiguous ending. Initially we cheer when Paxton dispatches the train guy, but then we realize what has really transpired and we are left confused as to our own reaction. We can no longer externalize Paxton’s crime as something sick and abnormal. We cant condemn it because in a way we approve of what he did. But it was still torture and murder. It’s true that the motive was different but each of the killers in the movie had his own motive. Paxton’s motive was rage and need for revenge – but why would this make him any different than the other torturers? The truth here is that we are willing to accept this sort of behavior given a good enough excuse. Anyone can become a monster under appropriate circumstances: duty, revenge, fear and etc… This is human nature.

Or maybe I’m reading to much into this. Maybe this is a totally shallow, slasher flick with no deeper meaning. But then again, if you read Kafka on the superficial level you also end up with really dumb stories full of logical and factual errors that seem ludicrous until you figure out that the author is literally fucking with you. Interestingly enough, Kafka’s name is completely randomly dropped during some stoner conversation. Eli Roth is either very talented or very lucky to accidentally create a seemingly shallow movie that could be read on a deeper level.

I’m sure of one thing though – he doubtlessly gets no love from people of Slovakia whose country got portrayed as some remote backward hellhole controlled by mafia and overrun by gangs of “lost children” willing to kill for bubblegum and smokes.