I was planning to write about something else today (something, anything but WoW) but I’m all out of stuff to write. I usually avoid doing technology posts on Saturdays (it’s a personal rule) but that’s really all I can think of right now. So I decided to simply get my last WoW post out of the way so I can move on to bigger and better things. It has to be done. Forgive me if this post is barely coherent, but I’m typing it at an ungodly hour in the morning to be queued up to appear around 11 as usual. I’m tired, I’m cold and I need to go to bed soon. First, however let’s discuss WoW.

I could use this post to carefully discussing all the things this game has going for it, and all the things I didn’t like but I feel this is what I have been doing all this time. But I know you will ask me: “Why are you not subscribing to this game? After all the nice things you said about it you will just abandon it like that?” So this post will essentially be a “Why am I breaking up with WoW” clarification. 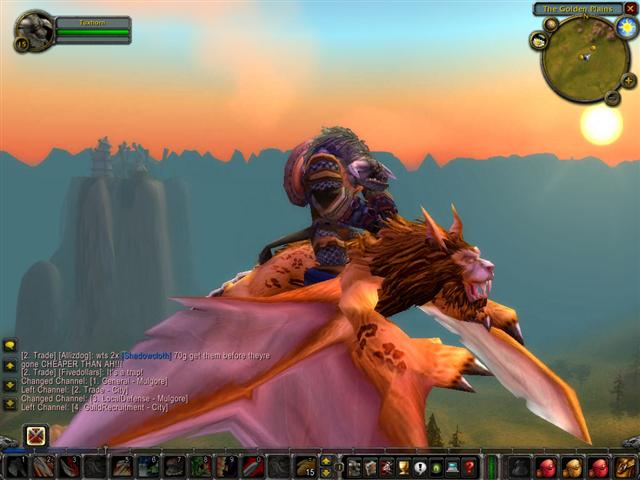 Let’s face it – I’m not that hard core about video games. I’m what you call a casual gamer – I just don’t have time to invest in a game that requires commitment. Few hours a day is actually a lot to me – I have a job, a blog to write, a teaching gig, and a life. Ok, that last one is a lie, but the rest of these things are real. This week I made the effort to play almost every single day of the week to get the most out of the trial and it was getting to be a bit much. Not only I didn’t hit the 20th level cap on the trial account – I was getting kinda tired. If I was paying a monthly fee for the game, then I wold feel like I was wasting money every day I chose not to play. And when a game is starting to become a chore, you know it’s not for you. Some people can do this but I like to do other things with my free time like learning new things, coding, catching up on my RSS feeds and… Well, playing other games. 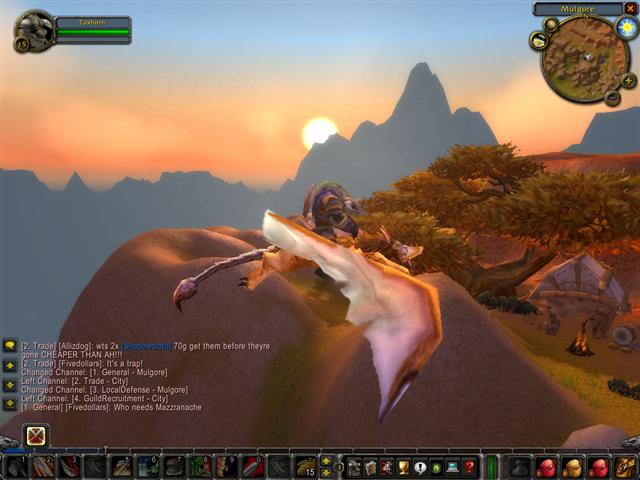 I’m not ready for commitment.

Here is the deal – I don’t need another job. Getting up to level 70 is challenging and time consuming enough but it supposedly gets even worse from there on. Raiding is like a night shift job – you need to be on a schedule, you need to put up with juvenile assholes who do Leroy Jenkins and fuck up your shit. One thing I just refuse to do is to set my schedule around a game. That’s just ain’t happening, period. Games are supposed to be this fun, leisure thing you do when you want to unwind, or waste few hours having fun. But that’s on my schedule – blowing off other shit because I need to raid is just not something I want to do at this point in my life. :P

We are just not right for each other

I’m just not a MMO player. I usually like my games to have a good story. In RPG’s I also like open ended game play, that encourages exploration and non-linear progress. That said, I’m willing to settle for linear storyline that keeps me on rails all the time if the story is good. MMO games usually sport huge worlds and tout non-linearity but in most cases this is a blatant lie. Every single MMO I played (GW, WoW, Eve, Anarchy) had this curious, quasi linear setup – especially for the first 10-20 levels. On the surface you have illusion of choice – you can either do quests, grind or just explore. Sadly the way the world is constructed, exploring is not always a good idea. You will probably recall my earlier WoW posts about being raped by high level mobs. This happens more than you think. The second you step off the beaten track you end up swarmed by high level monsters which really limits what you can do.

For example, if you are Tauren you are really supposed to stay in Mugolore area for the first few levels running between Narache and Bloodhoof. Then you move to Thunderbluff area for more high level mobs and quests. Then you head out and do missions/grind in the Barrens running between the Crossroads and Ratchet for a while. Then you can progress to Origmar, and etc. If while traveling to Crossroads you turn the wrong way and head towards Durstwallow Marshes you get raped. If you decide to leave Ratchet and explore the coast of Merchant Bay you will get raped. If you leave Origmar and head North, you get raped. All the quests are either local, or send you to your next grinding/quest giving location. At some point you can perhaps break out of this bind, but for a while you will be essentially on rails. 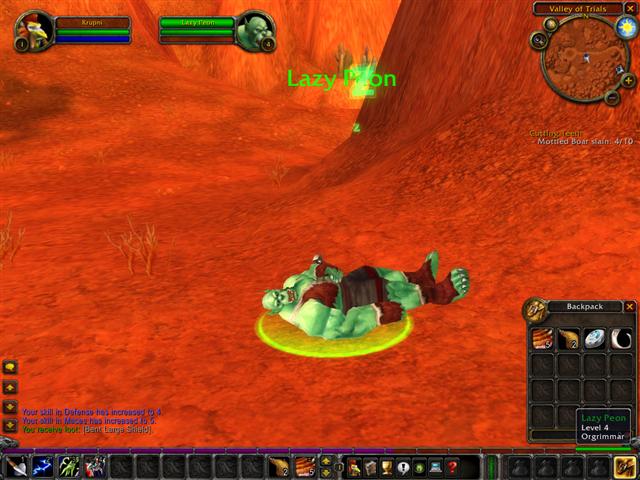 It wouldn’t be so bad, but the story is just not there. All the quests are of the form “kill X of Y” or “bring M to N” and there is no plot twists, no extensive dialogs and no actual “role playing” by making choices about your characters path based on their personality. You grind, you level up and you move on. It’s fun for a while, but I always seem to be looking for more. Wow is not that bad here because the game world is designed with a really great attention to detail, sense of humor and aesthetic touch. So exploring is fun, but it does get a bit repetitive.

To tell you the truth, I’m a little bit antisocial when I’m playing these games. When I’m in a group I always feel rushed and I don’t get to take my time to look around, enjoy the scenery and explore. But in these games you can’t always solo every area which means I now have to make some friends and convince them to go grind in that general area where my quest objectives are. And even then you will have people running off to do their own things, idiots thinking it’s a good idea to aggro the whole mob or the silent types that just want to get the mission done and get out. Some people enjoy this social aspect of the game – consider it to be a bit of a double edged sword. It’s nice to play with other people, but I do not always feel like being social.

Oh, and did I mention that every single person IRL that I told I’m playing WoW has rolled their eyes and told me I’m retarded? I’m serious, I’m getting some pretty bad peer pressure thing going on here. There are tons of people online who were really helpful with tips and advice, but it doesn’t help if your friends, family and coworkers are all making fun of you for playing this. lol

WoW is a fun game, and arguably it is probably the best MMO I have played. I think it’s fair to say that I enjoyed it more than Guild Wars because of the colorful characters, detailed world and interesting locales and the sense of humor. I love that WoW doesn’t take itself 100% seriously, and I really enjoy seeing things like lazy orc peons sleeping on the job. I definitely enjoyed this game more than Eve which was like a space sim that didn’t let you fly, and made you balance spreadsheets all the time. WoW is very pretty (especially during the day) and has a lot to offer. 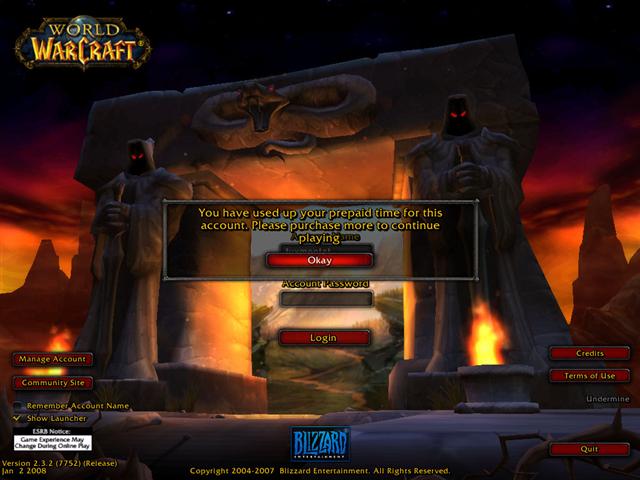 But it’s just not for me for all the reasons stated above. If it was free, I would probably continue playing it casually till I reached level 70. But it’s not, and Blizzard actually seems to be going out of their way to make the process of actually subscribing to the game after using the trial complicated. For example, if it was just a matter of typing in a credit card number on my account page so that they could charge me the monthly fee I could potentially be tempted to do it. Naturally, it’s not that easy. To continue playing the game after the trial has expired I actually have to go and buy a physical box in order to get the CD key. They don’t care if you downloaded the full client already – you still need to buy the box. And yes, it has to be a box – Blizzard is not selling CD keys online. This is bizarre to me as it just creates an artificial barrier for Trial players. WTF is up with that? Anyone cares to explain?

But it works for me – the act of physically buying the box is something I can’t really justify in my mind as easily as typing in a cc# into a text box. So I’m not doing it. They could have lured me in pandering to my laziness, but instead they strengthened my resolve not to subscribe to this game. :mrgreen:

This entry was posted in video games and tagged review, wow. Bookmark the permalink.