I finally got to see Cloverfield few days ago, but I never got around to writing up a review. I have to preface this review by saying that I went to see this movie clean. I did not really pay attention to the viral marketing stuff that was going online. All I saw was the official trailer which was awesome. Based on the trailer I had huge expectations but few people who saw the film on the premiere day told me it totally didn’t live up to the hype, or even the trailer. Few days later I talked to someone who liked it but admitted it was not really as awesome as it was made to be. So I went in expecting to be entertained but not blown away. 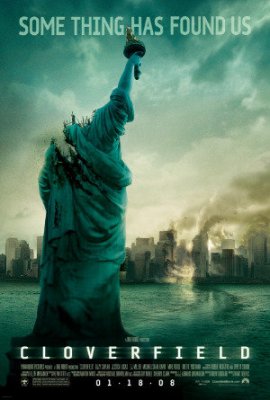 This is essentially what happened. Cloverfield is a new take on one of the oldest themes in movie history – the giant monster attack. In most of the productions of this type, starting with Godzilla and ending with… um… The American remake of Godzilla we follow a group of characters who are always privy to the information about the monster, and are in position of stopping it or luring it away. Sometimes these are misunderstood scientists, other times they are heads of state, military leaders and etc. No one before told this type of story entirely from the perspective of the little people on the streets of attacked town who are desperately trying to avoid getting stomped on.

Cloverfield fills this niche, and uses the big creature from the depths of the sea (or wherever it came from) as a backdrop for the human drama taking place on the ground. In fact, the point of view we see is even more restricted. The movie is filmed with a Blair Witch shaky cam to look like an amateur recording of the monster attack found in the ruins of Central Park at some undetermined point in the future. The characters are a group of young people caught in the thick of things, trying to escape the city and avoid being killed by the monster, or by accidental friendly fire of the military forces sent to fight it. We never get an explanation for the monsters arrival or it’s origin story. It’s just a nameless force of nature that is just there. 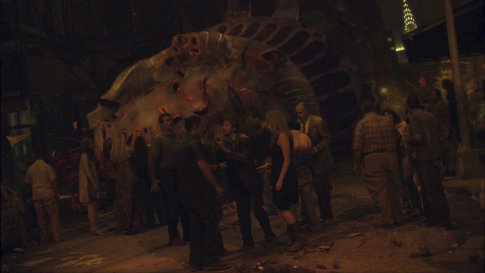 It’s actually a great concept! To bad the execution was a bit sub-par. First, the monster was only interesting when they didn’t show him. The sound effects, explosion and tension building devices were all executed perfectly. Unfortunately the cgi done on the monster itself was less than spectacular. I think the golden rule “less is more” would apply here. There are several scenes in the movie in which we get a very good look on the beast and it is neither scary, nor distinctive. There are memorable creatures in the movie history but the Cloverfield thing is not one of them. It essentially doesn’t look like anything – to me it was a cross between a frog, king kong and a praying mantis. Or something like that. I think that by making it so alien looking the CGI team unintentionally made it awkward and forgettable.

But as I said before, the monster is not the main focus here. It’s the human story that counts. But, it is a story that we have seen before. We have the obligatory pair of lovers who had some falling out just prior to the monster attack. The crisis will bring them back together and help them to discover their true feelings for each other. We have the comic relief sidekick who always says inappropriate things at the wrong time. He also happens to be the camera man, and his name is Hud. Is that a play on the acronym H.U.D. or am I just looking to much into it? 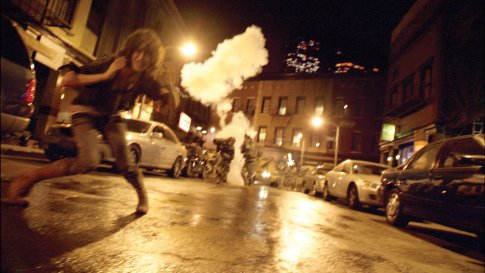 There is also a token minority friend whose personal drama takes second fiddle to the central love story, but who is destined to survive this crisis due to the Hollywood logic. Everyone else is a walking casualty that can be exploited to heighten the drama. Predictably enough, the boy and the girl get separated and trapped in different parts of the city. The boy and his friends decide to go and rescue the girl which takes them directly into immediate vicinity of the monster and the funny sounding crab/insect looking parasites that jump off of him. And that’s about it. There is not much else to it. And that’s the disappointing part. The story is astonishingly simple, and the relationships between characters are a bit shallow and one dimensional. We don’t really get to know them well enough to care about them. There are a cohesive group of friends, and there is no rift or internal conflict between them.

With this premise, they could have easily made the film half an hour longer and work in some powerful character driven subplots, and expand on the relationships between the protagonists much more. It could have delved into psychological and social aspects of the catastrophe. It could have shown the natural leaders of the group buckling down under these circumstances, and the weak and timid assuming leadership roles responding well to the pressure. They could have shown intense drama of having to choose between helping a friend in need and the instinct to run away save oneself when faced with these sort of circumstances. 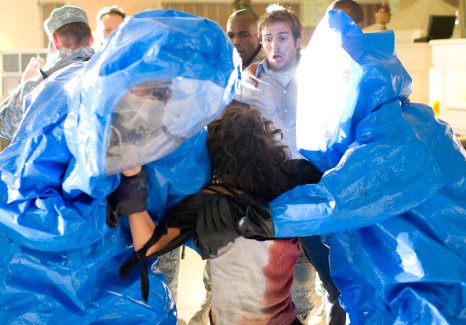 But there is none of that in there. All our protagonists hold up pretty well. They all support each other, and stay together till the very end. And Hud keeps filming even when he is being attacked by the small monsters, or when climbing a very steeply inclined roof of a ruined building.

Don’t get me wrong though. There are some intense moments in the movie, few twists and and an ending that may either shock you or piss you off. The acting is good, and all the cast members deliver convincing performances. Other than the monster effects, the CGI and sound effects are spectacular. With the exception of the parasite/small monster sound. This must be the stupidest sound effect I have ever heard in my life. It belongs in a Saturday morning cartoon, not in a monster movie.

The shakycam work was pretty decent – bad enough to look realistic, but not enough to make you sick. The action moves fast, and there is never a dull moment. There is no time to be bored, and the film genuinely keeps you on the edge of your seat most of the time. It is a solid dose of entertainment, but it could have been so much more.