At the beginning of the month, Adobe finally had a sudden bowel movement and defecated an AIR release for Linux all over the internets. Naturally it is an alpha release, which means some things may still be very, very broken.

If you don’t know what AIR is, chances are you also don’t know about Twitter, which means you have been living under a rock for the last 900 years. I’ll explain it anyway. AIR was designed to be a platform for lightweight desktop applications, and has been essentially hijacked by Twitter enthusiasts. The most notable applications running on this platform right now are Twitter clients such as Snitter or Spaz. I’m sure it has some other uses, but I don’t know them. The only AIR apps I have seen so far are Twitter clients, and clients for other Twitter like services. If you know some interesting non-twitter related AIR apps I would love to see some links.

I complained about this before but the selection of Twitter clients on Linux is piss poor. Go to Twitter Fan and just look at the linux section. We have two emacs based clients, a vim based client, one written in bash, one which is essentially curl+zenity, a gnome desktop widget, and two or 3 more clients which just wouldn’t work properly on my machine due to bugs or dependency issues. If you scroll up and down you will see that Windows and Mac have all these nice, shiny graphical clients rich in features.

I installed Linux version of AIR to see if some of the nice AIR twitter clients will work on Linux the same way they work on Windows. The answer is – sort of. I installed both of the clients mentioned above: Snitter and Spaz. Nice thing about Air is that the installation looks and feels exactly the same as on windows. So you get a very pretty graphical installer. I’m using Kubuntu (Gutsy) so the apps got installed in /opt which frankly is where I’d put this type of stuff given a choice. The installer also put shortcuts into my KDE menu, although they used the full package name which contained a very long checksum of some sort. Still, I’m not complaining – it works as expected.

It took me a little while to figure out how to uninstall AIR apps until I realized that they are actual deb packages. So you can easily remove the apps you don’t need using aptitude which is great news. Too bad they don’t let you know about this when you are installing apps. I had to go to their Linux FAQ to find out about it.

The apps are a slightly different story. You can look for yourself. Here is how Spaz looked for me: 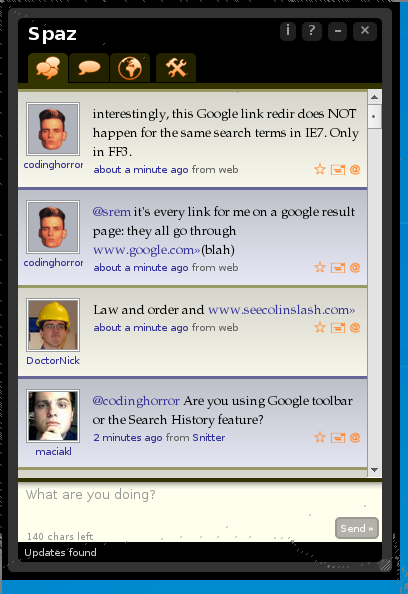 You can see a little blue background on this shot – this is not because I did a sloppy cropping job, but because I wanted to show you that the drop-shadow transparency that some of these apps use is not working here. On windows the edges are nicely rounded and have that faded shadow effect. On linux you get the ugly opaque black border. I guess this is one of these features which was not implemented in in the Alpha release.

Spaz also had major problems remembering my username/password. It would keep it in memory for the duration of my session, but when I closed and reopened the app it prompted me to type them in again. Initially I thought it was because Spaz was trying to write some config file in /opt but that was not the case. I guess this is another Alpha related bug.

Snitter didn’t have this issue and remember my password correctly. It also had the same border issue but I already expected that: 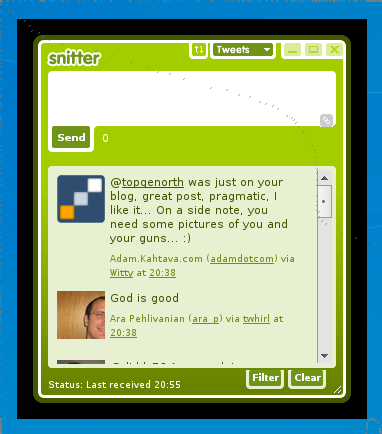 Snitter exposed a different AIR bug to me. Whenever the Snitter window lost focus (for example, when you switched desktops, or brought another window to the foreground) it would simply disappear. The process was still running but the window would simply vanish. Killing the process and running the app again solved the process but it was not efficient enough. I’m suspecting it was trying to “minimize to tray” but didn’t know how to integrate with the KDE tray I was using.

So while both applications are perfectly functional, the seem to be using AIR features which are still missing from the Linux implementation. This makes them to annoying to be of use to me on a daily basis. I guess I’ll have to wait for the fully featured version until I can use one of them. In the meantime I found out an app which actually works semi-reliably on linux. It’s Thwirl:

It doesn’t work perfectly though. You need to disable the “hide on minimize” option or it will vanish when you minimize it. Remember that AIR has no clue how to put apps in the KDE tray. This may actually work with Gnome – I don’t know. I haven’t tried it. The second issue is that the popup notifications are a bit wonky. If you get more than one, they sometimes end up one on top of the other. The fade effect totally doesn’t work for them either – they just start blinking and jumping around. I’ll need to see if it can be disabled. Either way, Twhirl is a winner on Linux. :P

As a side note, I would love to know if you are currently using any other Air apps right now. Especially if it they are not related to twitter in any way. I’m wondering where this platform is going. :)

Btw, iVenus – you wanted some screenshots so here they are. :)

Actually, I take it back. Twhirl also forgets my password. :( It does remember the username though. Whatever these two apps do to store passwords is apparently still wonky in the linux alpha.

This entry was posted in sysadmin notes and tagged linux, twitter, ubuntu. Bookmark the permalink.