I never played D&D. This is probably due to the fact that I grew up in Poland where D&D and AD&D manuals were not easily available. Besides, we had a home grown clone called Kryształy Czasu (Crystals of Time) had an unique (and by unique I mean stupid) fantasy setting and overly complex mechanics (and by overly complex I mean stupid). It is only notable because it is probably the first domestic full fledged RPG ever published. We did not play it because the game was widely considered to be “fucking stupid”. AD&D was sort of in the same ballpark and my gaming group never bothered acquiring the expensive rulebooks which were not printed in our native tongue.

Guess what was the most popular foreign fantasy RPG franchise when I lived in Poland? You will never guess. No, it was not the time crystal thing. It was not D&D or anything even remotely related. The most popular fantasy RPG on the Polish market at the time was Warhammer Fantasy RPG. Yeah, a game derived from that tactical miniature tabletop game. Someone got a bright idea to translate and publish it and it killed. I swear, everyone played it.

Me and my friend once decided to start like a little local RPG gaming club – we put out an add, secured a locale where we could meet and everything. Few people showed up, and we asked what games they played before. It was a wild scatter shot – everyone played widely different systems… There was only a single common system amongst all of us. We were all were familiar with Warhammer FRPG. So guess what game we played? Ok, we played Cyberpunk 2020 that day (with a beautiful TPK) but it was pretty much Warhammer from there on out.

It’s strange but the game was not bad. The rules were sort of crappy of course but they were simple. It was pretty much roll d100 under the attribute. If you don’t have the right skill, GM may force a negative penalty. Combat was pretty much lifted straight from the miniature game and was serviceable, if a bit simplistic. The system of professions and buying increases for your attributes for the XP was a total mess but we managed.

The game was very well supported and there were dozens of supplements and campaigns available for it. In addition the Warhammer Fantasy Battles game was well established and had lots of background fluff floating around in various Army books and publications – and porting them into the RPG game was fairly painless.

Besides Warhammer I played Star Wars D6, Mutant Chronicles, Dzikie Pola, Vampire: The Masquerade, the already mentioned Cyberpunk 2020 and Spacemaster (but using GURPS not Rolemaster ruleset – I don’t know why, ask my former GM – but likely cause Rolemaster was a clusterfaq of confusion).

All of these games had fairly specific settings. D&D is on the other hand this incredibly huge… Thing with many planes of existence and various crazy campaign settings such as Spelljammer (BTW, what the fuck in hell were they smoking when they made Spelljammer?). So it is almost like several games in one. If you thumb through the Monster Manual without realizing that the critters depicted there come from a wide array of planes, that do not all reside in the same setting you may think that the D&D is just plain fucking nuts.

I’m probably late to the party pointing out the Stupid Monsters of D&D article that has been making rounds on the interwebs lately. This fun article plucks out the silliest monsters from few dozen D&D related books and some of them are just plain hilarious. I think my favorite ones are Monkeybees and Duckbunny. And no, I’m totally not shitting you. Check out the page and see what I mean. Silly! 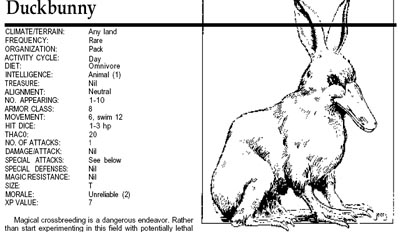 There is another series of posts in a very similar vein which starts here. In this one the author pretty much goes alphabetically through the 3rd edition Monster Manual. So it’s not just selective cherry-picking of some inane acid induced creations from 70’s which since vanished from the books. These are recent – and some of them are really goofy. Too bad the blog seems to have fizzled out and there have been no new posts from months now.

After looking through these articles I started thinking that perhaps I didn’t miss much by never playing D&D. This whole “let’s make as many monsters as we possibly can” philosophy can’t be healthy. I’m sure that a lot here depends on the GM and the setting you pick. I also know that D&D pretty much started this whole RPG thing we all know and love. It is also the only RPG game that “normal” people know about.

For example if I told someone I play Role Playing Games they would probably give me that “I really don’t want to hear about your sexual perversions look”. When I say “I play D&D” they instantly know what I mean, and simply give me “OMG, you are such a nerd” look instead.

Did I miss out by not playing this game? To me it doesn’t seem so – especially since I’m more into the Role Playing aspect of the game rather than into “Roll Playing”. I don’t mind rolling dice, but once you break out a grid with figurines and ask me how many squares I want to move, I’m fucking leaving.

Anyone here ever played D&D? What are your experiences with it? What other RPG games have you played? I’m writing all of this stuff because I want to see if any of my regulars (you know who you are guys!) has any clue what I’m talking about. I’m aware that this will probably be one of those posts with like a single comment that said “I know nothing of this stuff, but that article you liked to was pretty funny”. But hey, I figured that I’ll try.

If you ever played RPG’s (not on your computer) please sound off. Let’s see how many people we have here and what systems you played.


12 Responses to Stupid Monsters of D&D