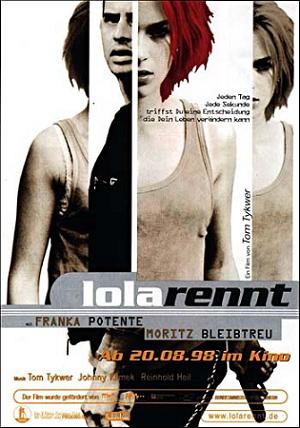 How would I describe this movie in one sentence? Let’s see. Maybe “Groundhog Day on Crack”? Hmmm… No that’s not it. In fact it’s not even close. The movie does bring up similar questions about time, chance, cause and effect and one man’s destiny and power to change it with small, seemingly insignificant action so I guess I’m bound to compare the two.

In both movies for example the protagonist loops around in time re-living the same events multiple times, and is allowed to experiment with cause and effect. But instead of a jaded and unpleasant weatherman, the hero of this movie is Lola, an attractive young girl with flaming red hair, and an attitude. Unlike Phil Connors (who found love because of the loop) she seems to loop out of love for her boyfriend. The setup is simple. Manni (Lola’s guy) gets in trouble with the local mafia, and must come up with $100k in less than 20 minutes or he will likely be killed. To save her man, Lola will have to come up with the cash, and quick.

We see Lola run through the city 3 times. Each time her path is almost exactly the same, but small variations inevitably sneak into the picture. On one run she bumps into someone, on the second she passes them by, and on the third they never meet and etc.. These small changes end up being significant because they allow Lola to gain pr lose precious seconds and each successive one can and will influence all the other ones that follow it.

We never find out why exactly is she looping around in time like this. I mean, you can figure out that it’s love and determination that pushes her forward. But we never learn why or how this happened to her and not someone else. Lola herself is largely unaware of this fact. She does not know she is looping back in time, however for some reason she does seem to retain some memory from previous runs. For example during her first loop Manni teaches her how to take the safety off a pistol. On the second run, she takes the safety off herself as if remembering it. This sets up a slightly different tone than the Groundhog Day.

There was a sort of logic to that movie – Bill Murray’s character knew that he is going to loop around each day, and retained all his memories. He could plan ahead, and through observation he could slowly gain a sort of omnipotence and exert more and more control over his fate. Lola doesn’t have that luxury. For her, each run is a first, there is never any guarantee that she will get another chance. Despite that Lola seems wiser, and more apt at exploiting using her environment during each subsequent loop.

Phil Connors broke out of the time look using logic, planning, and powers of observation. He could break down his day, plan his activities, and set everything up for success. Lola only has 20 minutes, and she is in a mad rush each time. Her world is one of raw emotion ruled not by logic but rather than fate, chance and destiny. In a way this story reminded me about this quote from Paulo Coelho’s Alchemist:

When you really want something to happen, the whole universe conspires so that your wish comes true.

Lola’s universe comes alive and indeed conspires to make her succeed. Unlike the cunning weatherman from Groundhog Day, Lola has little control over her situation. There are many variables that she can’t influence, and luck and chance play a big role in each loop. She has no other choice but to trust her luck and like Coelho’s protagonist hope that it will direct her steps toward the goal. When she ignores this magical conspiracy it becomes an obstacle. She trips, she falls, she is late or to early. Only when she starts noticing the events around her, and takes her cues from them she is able to make real progress. Phil Connors had to take his destiny in his own hands, and be the agent of change. Lola on the other hand, must let go and let her heart guide her to succeed. The agent of change is fate, and she is but a pawn with a mission. To succeed she must allow the universe to propel her towards the solution; she must put everything on the line and hope that the wheel of fortune will swing her way. Otherwise she is doomed.

Should you watch this movie? I think you should. I enjoyed it, and I think you will too. It is fun, entertaining a little bit campy and it will definitely keep you at the edge of your seat. Fair warning though – this movie has subtitles. The action takes place in Berlin I believe, and all the actors speak German. This didn’t bother me. In fact, the streets, cars and the architecture looked oddly familiar. I was never in Germany but I lived half of my life in Poland and it seems that the crappy cars, and run down buildings, and shitty supermarkets in both countries are oddly similar. I also remember using those funky phones that take plastic phone cards instead of change. So for me this was not only and entertaining flick but also a trip down the memory lane.