Gibsonian Concept of Cyberspace is Silly and Outdated

In the early 80’s William Gibson imagined that the young and still developing Internet will one day bloom into Cyberspace. He envisioned it as an abstract plane where your disembodied mind can wander, surfing on the streams of data, and traveling down the information highways:

Cyberspace. A consensual hallucination experienced daily by billions of legitimate operators, in every nation, by children being taught mathematical concepts… A graphic representation of data abstracted from banks of every computer in the human system. Unthinkable complexity. Lines of light ranged in the nonspace of the mind, clusters and constellations of data. Like city lights, receding

This imaginative vision has sort of became a Cyberpunk staple, and nearly all novels and movies that aspire to belong to that genre try to include some sort of reiteration of Gibson’s idea. Almost without fail, your average cyberpunk story will include some sort of abstract datum plane, with ZX Spectrum era visuals, city like landscapes of glimmering semi-transparent text and scary looking spiky viruses, rigid geometric security programs and force-field like firewalls. With small variations your average Cyberspace session should look something like this: 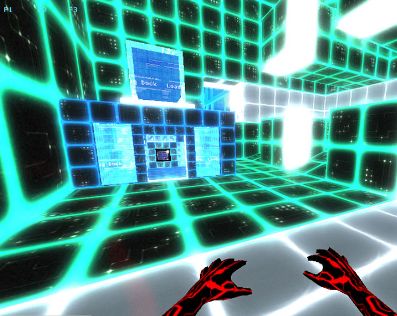 In the 80’s Cyberspace seemed… Plausible. And if not plausible then at least not very far fetched. Most of us could imagine the technology escalating to the point where this sort of virtual reality interface would be possible to achieve. Of course today it looks a bit silly and anachronistic – a bit like Steam-Punk genre which is laughable unless you buy into it’s specific distortion of reality.

Let’s face it, browsing the web on your iPhone is about 100 times more convenient than obtaining data the way Gibsonian cyber-jockeys and netrunners did. First of all, they needed to strap themselves into an expensive cyber-deck usually using a neural shunt. While surfing they were pretty much a vegetable strapped to some electronics. You on the other hand have almost ubiquitous Wifi coverage, and Edge/3G networks all over the place so you can browse while driving or walking your dog in the park. Your average netrunner has to navigate through a labyrinthine glowing maze to find what he is looking for. You just fucking google it. And so on, and so forth.

There were many attempts to make 3 dimensional, more Cyberspace like interfaces for our computers but none ever caught on. Every once in a while someone comes up with a new, innovative way of visualizing search results, or organizing data on a web page. But nothing beats the simplicity and usability of a flat HTML page with links and perhaps some embedded multimedia. Why on earth would anyone want to jack in, and float in a world of abstract data visualization crap if they could just pull up a regular web page and read it. Gibsonian cyberspace fails the Ockham’s Razor test. It’s complexity does not translate into utility or usability.

I believe there will never be a virtual reality representation of the web. While we might one day be able to build VR simulations that will be nearly indistinguishable from reality (like out own Matrix) I highly doubt that the same VR technology will be used for something as trivial as browsing the web. The future Cyberspace is much different and probably not so much unlike what we have right now. I envision that one day browsing the web will look a bit more like a HUD display you have in many FPS video games.

You will be walking down the street while browsing the web and looking up directions on your internal HUD display, enjoying a ubiquitous free high speed Wifi blanketing most of the civilized world. There will be no neural shunts, or ugly Matrix/Ghost in the Shell like ports in the back of your neck. Your neural implant will be a tiny speck of silicone tucked beneath your skin and muscle with no physical ports – purely wireless bio-powered device with a biological hardware switch allowing you to switch it off or reboot it via muscle reflex or something equally simple.

I don’t envision a radical shift in the way data will be displayed or presented to us. Your typical website layout will probably change slightly because your HUD will have almost limitless adjustable resolution. Your average user interface design will probably change a bit too, seeing how we will no longer be using a mouse as our primary input device. So stuff like sidebars and tool bars may morph into more intuitive and organic elements since we will now click by thinking and won’t need to actually move any sorts of pointers (I hope).

Most of the web will still be text, because that is the medium that is so far easiest to parse, skim along, catalog and organize. Many SF and Cyberpunk movies and novels assume that we will at some point shift towards other media – that for some reason we will return to oral traditions and record our data on holographic displays (holocorns?) and etc. But let’s face it – text is just more convenient. Think about it – what would you rather have – a short one paragraph written summary which you can skim over in seconds clicking on relevant links in the text, or a 3 minute video of some dude explaining the same thing? When I just want facts or information and I need it fast I will take the textual representation every time.

IM and traditional Cell Phone may get replaced by sub-vocal VOIP like communication that will bypass your vocal cords and let you converse over the net without actually making any sounds. Then again it may not considering that texting and IM’ing is still much faster and more direct form of communication.

Future viruses and spyware won’t explode your head or make you go mad. They will simply fuck up your software and steal your identity the same way they do it today. I imagine that reinstalling the OS and software on your wetware implant won’t be terribly difficult. In fact, such devices will probably come with a pristine image of the OS encased in firmware so that you can roll back to a clean slate at any time.

All in all, we will be much more connected than Gibson could ever dream of without all the silly limitations and real-world abstraction he built into his vision of Cyberspace. Then again, in 20 my vision of the near future may be as silly and short sighted as Gibson’s Cyberspace seems right now.

This entry was posted in futuristic musings and tagged internets. Bookmark the permalink.


16 Responses to Gibsonian Concept of Cyberspace is Silly and Outdated