New game in the spirit of Name That Movie or TV Show cycle I’ve been doing here. This one is a bit different and possibly more difficult. Or it could be easier. I don’t know.

This version of the game may appeal to slightly different crowd. Instead of identifying movies, I’m asking you to identify video games in the picture below. And instead of random screenshots, I’m actually using the box covers. Naturally since each video game box has the name of the game printed on it, and usually a signature, distinct art I’m adding some Gaussian blur to each of them. I tried to make them fuzzy enough to conceal telltale details (and the title of course) but clear enough to allow you to recognize the box by shape, color and composition.

I tested it on my brother and he immediately identified 5 boxes correctly, 2 incorrectly and had no clue as to the rest. So hopefully this won’t be solved by the first commenter. :P 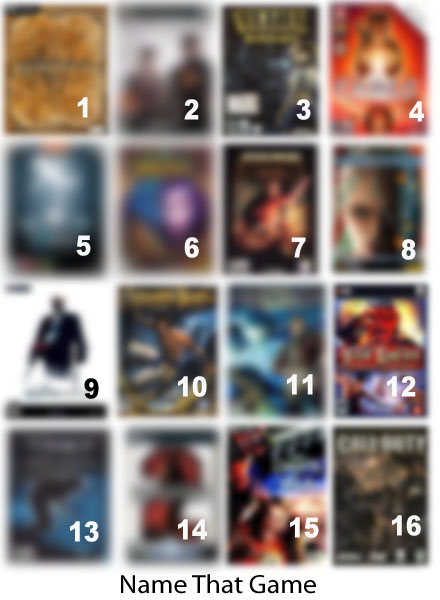 Something tells me I’m making it to easy, but we’ll see. Let me know whether you like this new variation on the game. I will probably continue making “Name that Movie” panels in the future, but this could be another fun distraction. :)

This entry was posted in video games and tagged name that game. Bookmark the permalink.