Hyperion by Dan Simmons is a rather interesting book. It is really an analogy of short stories taking place in the same universe, and connected with common narrative. The individual pieces could be read alone, outside the novel without losing to much. You can think of them as flashbacks which help to develop the main characters, give them back stories, and show you different aspects of the portrayed world. Each of them also adds a piece to the over-arching mystery of the planet Hyperion. 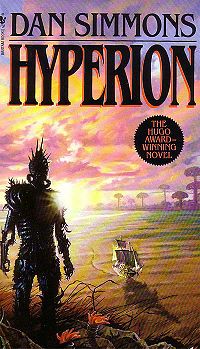 This backwater planet lying on the outskirts of the galaxy spanning empire played a key role in the lives of the 7 pilgrims returning to it for the last time as the galaxy spanning is on a brink of devastating world. It is a home to some of the universe’s impenetrable mysteries such as the vast, empty labyrinth of unknown origin underneath it’s surface, mysterious monuments called the Time Tombs which generate anti-entropic field (which evades understanding by modern science) that seems to be propelling them back in time and the almost mythical, fearsome, bloodthirsty beast known as the Shrike.

No one really knows what the Shrike is, since almost no one who have seen it lives long enough to tell anyone about it. But the creature has been also known to grant requests to it’s worshippers who go on a pilgrimage to the Time Tombs and put their life on the line. When the story begins Hyperion is about to be invaded, the Time Tombs seem to be opening and the shrike goes on a rampage decimating the population of the planet. The cult of Shrike carefully selects 7 very special pilgrims and sends them to face the beast.

Since the pilgrimage is a long and ardours trip they decide to share their stories with each other and figure out what exactly makes them so special. Simmon’s takes great lengths to keep each flashback unique by giving it distinct mood, flavor, tone and language. The narrative style shifts quite drastically depending on the subject. So for example the Soldier’s Tale is told by a third person, omnipotent narrator in a very structured and linear way. The Poets Tale on the other hand is first person narrative with flowery (and often crude) language, with many tangents, asides and soliloquies. The end result is a curious but rather interesting mix that offers the reader wide variety of experiences.

The quality of the individual stories varies. All are well written and interesting, but some will definitely stand out and lodge themselves in your memory. My favorite was probably the Scholar’s Tale which was a mix of all the right stuff. Moving story about parenthood, terrible heart wrenching loss, crisis of faith and trying to cope with a mysterious terminal disease destroying life of one’s only child. The Priest’s Tale also made a great impact on me – eerie, disturbing and soaked in mystery. The Soldier’s Tale on the other hand left me cold. I felt like it did very in terms of character development, and the ending killed whatever suspense it managed to build with a rather pointless combat scene. Nevertheless it contained interesting insights to the Outster culture, the organization of military in the human Hegemony, it’s customs and strategies. The Poet’s Tale was good, but in my opinion was a bit jumbled and lacked a disturbing hook or twist evident in most of the other pieces. Still, it provided great background on the history of the Hyperion universe, the destruction of Earth (eaten by a wormhole produced in a LHC experiment btw) and colonization of the planet Hyperion. Even if you hate the main character, you will keep reading it to find out more about the universe.

I did not care much for the Detective’s Tale on either. It was essentially an old-school Gibsonian cyberpunk detective story, complete with the silly notion of cyberspace, scheming AI’s and a murder mystery in the middle of it all. While I do not despise this genre, I’m not a big fan of it either. But once again, while this particular part of the book was of average quality (at least IMHO) it did add new insights to what makes Simmons’ universe tick.

The book is closed with the Consul’s Tale which is a slight departure from the other other tales in the book. The focus is shifted off he planet Hyperion here and revolves around the issues of innocence lost due to progress, colonialism and features an interesting spin on the twin paradox. Instead of twins, however we star crossed lovers one of whom is a shipmate on a star cruiser traveling at relativistic speeds, while the other stays planet-bound. One stays young while the other one ages naturally. Strangely moving and sad piece. It is actually a verbatim re-print of Simmons’ short story which appeared in the anthology “Prayers to Broken Stones” and later became a seed for the Hyperion universe.

If you like a good Scifi with a dash of mystery and touch of supernatural I highly recommend this book. I believe that you will find at least one story inside of it’s covers which will either move you, disturb you or stay with you in some way.

This entry was posted in literature and tagged dan simmons, review, sf. Bookmark the permalink.