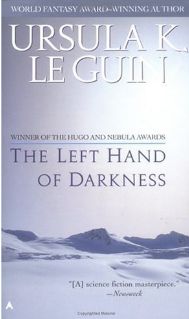 It’s funny but Left Hand of Darkness is one of these books that seems to inspire one of two distinct reactions in it’s readers. Some find it interesting, thoughtful and intriguing while others think it’s hopelessly dull and boring. I find myself somewhere in the middle between these two extremes. I can’t deny the fact that the story moves at a glacial (pun intended – you see, the action takes place on an arctic frost-ball planet known as Winter to the outsiders) pace. The book doesn’t have any surprising plot twists, or deep impenetrable mysteries. Anyone expecting fast paced action and intrigue will likely be disappointed.

However there is also no denying that the novel is a very interesting commentary on the human condition. Ursula K. Le Guin creates a very detailed, and very convincing world populated by strange offshoot of the human species with unusual sexual characteristics. All Gethenians (inhabitants of the aforementioned ice ball planet) are androgynous hermaphrodites. Most of their lives they exhibit no external sexual characteristics whatsoever, have no sexual drive and are biologically sterile. The only time they are sexually active is a short period that lasts about a week of each month called kemmer. During that time they take on either male or female characteristic and are able to copulate and reproduce. The development of sexual characteristics is fairly random and every Gethenian is capable of both becoming a male or a female each month. If an individual just entering their kemmer phase is exposed to another individual in full kemmer (ie. with fully developed outward sexual characteristics) he will usually start taking aspects of the opposite sex to facilitate procreation. Thus, Gethenians in kemmer often take on female characteristics when around Genry Ai – the protagonist of the story, and a baseline human male.

Winter is a world where gender virtually does not exist, and sex is just a monthly call of nature that can be dealt with and put out of one’s mind. There is no sexual frustration, sex based crime, sexual repression or discrimination. Sex is not a taboo, or a source of power (or lack of thereof). All in all, it plays a minor role in the lives of average Gethenians. The are in many ways liberated from this additional baggage which stems from having two genders, and two separate sets of standards, expectations and behavioral patterns associated with each of them.

Genry is an envoy sent to this strange world to introduce it’s inhabitants to the other human populated worlds and to convince Gethenians to enter into a trade alliance with the intergalactic society known as the Ecumen. His often chauvinistic male outlook and attitude toward sexuality and gender may seem a bit dated now, but still rings true. While you may not agree with some of his characterizations, you can plainly see that Genry’s problem is not that he is sexist, but that our culture and our language is charged with and polarized by sexuality and gender. Simple words can often carry different connotations when gender enters the picture. For example, consider the words king and queen. While both can describe a head of state, only the first exclusively masculine one implies th this status intrinsically. The female equivalent of king is a queen which also the title given to a wife of a king. Thus the subordinate, secondary role is implicit though not necessarily intentionally. These words are of course a product of a patriarchal feudal society and more modern titles such as “president” do not have these gender based issues. Still, our language is jam packed with legacy of words that are sexually charged in a similar way.

This is why Genry is struggling when describing the feudal ruler of one of Gethen’s countries. Using the word queen doesn’t seem appropriate due to the leaders status. Thus he calls him a king even though it is not entirely accurate either. For one, the king is pregnant and about to become a mother. You can probably see for yourself that the language itself gets in the way here. Genry finds himself tripped by his own preconceptions about gender and sexuality time after time.

It is a quite an amazing look at the alien psyche of Gethenians which serves as a mirror to reflect an aspect of our own culture and society that we might not notice as readily these days. Some may claim that while Left Hand of Darkness might have been ground breaking when it was first published, but is a bit dated now. I don’t agree. I do not agree. I think that the book is still relevant. While our society is more progressive now, the double standards and gender based unfair and unfounded preconceptions still persist in our language and in our culture. We may not notice them, but they are there.

It’s a good read, but may be a tad slow at times. If you are looking for something with more fast paced action, and imaginative dynamic worlds grab one of Le Guin’s Earthsea books. Left Hand is not for everyone, but if you give it a chance, reading it may be rewarding. If nothing else this book will expand your geek vocabulary with a new made up word which you will be bound to use just like you have learned to use grok to indicate profound, thorough level of understanding of a particular subject.

Shifgrethor is another one of those words that has no equivalent in english, but may become useful. Literally it means casting a long shadow, but it is not really how it is used. You see, on Gethen shadows indicate meaning and intrinsic value. To know a thing you must be able to see it’s shadow. This is quite poetically exemplified by a passage in the book when Genry and his companion are traversing a glacial ice sheet. The sun glare reflecting from the ice is so intense that it obliterates all the shadows and without them cracks and crevasses in the surface of the ice are very difficult, if not impossible to see. Thus Shifgerthor – one’s shadow is a measure of prestige which lies at the core of Gethenian culture – especially in the nation of Karhide. It permeates all forms of communication and can turn even the most casual exchange into challenging verbal duel. Much to Genry’s frustration people of Gethen are almost never direct. Their conversations are full of shifgrethor positioning – either to avoid injuring one’s shifgrethor, or challenge him and force him to defend it. They much prefer talking around issues, hinting at them almost as if outlining their shadows in the snow.

This reminded me of the way a colleague of mine described the experience of being pulled over by the police on his trip to Japan. He marveled how the very simple conversation turned into a complex social positioning duel due to the complexity of the language with it’s complex system of honorifics and expressions implying respect, and/or familiarity. He marveled how he had to address the officer in a way that would put them both on an equal footing. He had to avoid “talking down” to him which would be a sign of disrespect, and also avoid sounding to subservient as that would shift the power relationship between the two and give the policeman unfair amount of control.

This sort of social maneuvering exists in English as well, although it may not be as pronounced. For example, how do you address your direct supervisor? If you preface his name with Mr/Ms, Dr or other honorific you inadvertently place yourself in a subservient position. If you are on a first name basis, the power relationship plays out very differently. The opposite is also true – the way your supervisor addresses you also indicates a power and prestige relationship. Consider being called by your last name, last name prefaced by a Mr/Ms honorific, by your first name or simply as “hey, you” and ponder the power/prestige charge on each of these methods. This is how we maneuver for Shifgrethor and it does influence the relationship you have.

Anyway, now you will have a new word to apply to verbal power play and power positioning whenever you see it.


2 Responses to Left Hand of Darkness