Pitfals of the Zip File as Folder Metaphor

I’m not exactly sure how did we get this strange notion that compressed archive files should act exactly like regular directories. But this is the prevalent behavior in most environments right now. 90% of the time, when you double click on a zip file you will open up a window that either looks like or is your default file manager. You then will be able to manipulate the files inside the archive just like it was a normal folder. This is convenient but not exactly an accurate metaphor.

I recently noticed that people at work often refer to zip files as “zip folders”. In fact, I can’t seem to be able to convince people that these facts they are not in fact folders. After all, they open like folders in Windows XP so they must be folders. If it walks like a duck, and quacks like a duck, then it must be a duck! Right? Because of this, extracting compressed archives (or colloquially “unzipping”) is a foreign and abstract concepts. They just can’t seem to fathom why would one want to move something out of a zip file.

It get’s even better – my company often ships blank templates for various reports as regular Word and Excel files bundled in zip files. Some of our users are convinced that these files open up in read-only mode because “they are templates” and not because they always open them up from within a zip archive. When I try to explain they just scoff, and roll their eyes. They know better – templates are read only so you don’t overwrite the blank documents and the zip-folder is used so that you can “attach it to outlooks” in one go. All I’m doing is confusing them with some cryptic jargon and words like compression, “extrication” and “temporal folders”.

No wonder that one of the most common support calls over here is: “I was working on this report, I saved it and it disappeared!” Disappearing documents are almost a daily occurrence, and a direct result of treating zip files as folders. Even though the user thinks he is interacting with a folder, he is not. Windows is actually doing all sorts of crazy things – like creating temporary folders: 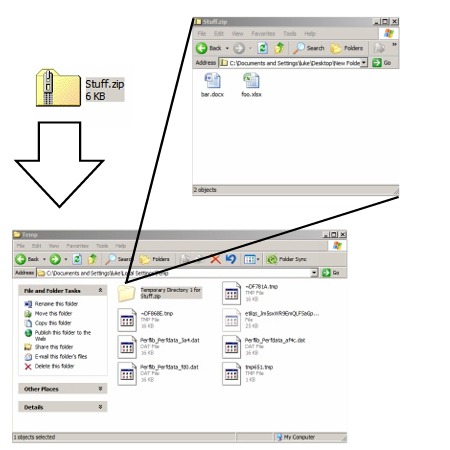 So you are really working with two different folders. One of them is the virtual folder, which is simply a preview of the contents of the zip file. The other is a temp folder that holds the actual file you are working on. Thankfully any file opened this way starts in read-only mode. That does not bother my users though since they wouldn’t want to overwrite the template anyway. Guess what happens when they try to save the file? They hit the floppy disk icon in Word (btw, why are we still using floppy disk as a save icon?), change the name and hit the “Save” button. Using their logic, the original file was in a “zip-folder” so the new copy should get saved in the same place. 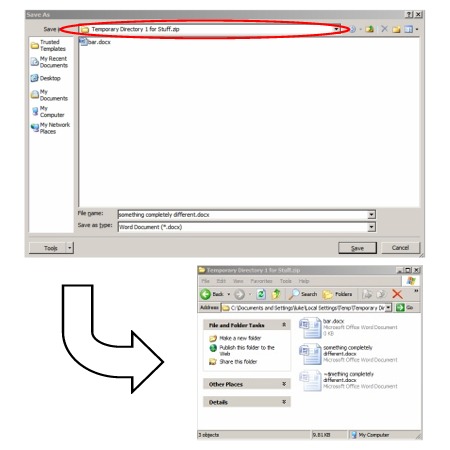 Word tries to follow this logic and makes it’s best attempt at fulfilling this request. But of course you can’s save stuff into a zip file. That’s just not how it works. So it does the next best thing, and saves the file in the temporary location that corresponds to that zip file. It gets even better when you are opening a zip file that is attached to an email from within Outlook. Then it is a 3 step process – first you need to extract the zip from the Outlook’s PST archive, then extract the file from the temporary zip.

I know this is what happens. You know that this is what happens. But for my users, it is obvious that Word just ate his document, and that somehow this is all my fault cause I’m responsible for the IT stuff. Can’t argue with that logic – it’s impeccable! At least that’s what the pointy haired people tell me. We shifty geeks in the IT department should get over our God complex, and stop trying to screw over the honest, hard working business folk at every step.

I made a valiant attempt to explain how zip files work to yet another valuable employee who inadvertently lost his work again and I was told that what I said makes absolutely no sense. My user said that he doesn’t know why would anyone ever design software to work like this and concluded that I must be lying to cover up the fact that we gave him a laptop with a faulty version of word and probably a defective hard drive. So we better ship him a brand new laptop to avoid having issues like that in the future. And not a used laptop either – cause then it might still be broken and lose documents. He needs a brand spanking new one from Dell. Preferably “duel core” with many “rams of memory” – like 8 would be best. This way he will have more “rams” to store his files.

He is right in a way though. I also don’t know why anyone would design software this way. I’d probably never actually go through with this “zip file that acts just like a folder half the time” silliness. But that’s what we have right now and it’s not going to go away anytime soon. So we best get used to it.


16 Responses to Pitfals of the Zip File as Folder Metaphor