Running a Blog on Google Appengine

Last week, I talked about setting up a dynamic personal web page on Google AppEngine. I mentioned that it would be possible to grow and expand your page beyond the simplistic informational page I have shown you. More specifically, I mentioned running blogs and forums out of it. I already described how to set up a AppEngine based forum so there is no need to reiterate that here. Today I wanted to talk about running your own blog on top of the service.

No, I don’t expect you to write your own blog software, just like you didn’t have to write the forum software. Believe it or not, but blogging engines are being ported to or designed this platform. One of such engines is Bloog written and maintained by Bill Katz. As far as I can tell, it is one of the first Blog software that runs on AppEngine but there will be more to come – I’m sure of it.

Bloog may not be the most sophisticated blogging platform, or the most configurable one – it’s not WordPress. But it is fully functional and it has everything you may need for day to day blogging. It supports reader comments, tagging, has a dynamic contact form, dynamic archives by year, it automatically generates an Atom feed and the template is pre-configured to allow you including vertical add banners in the sidebar. No bells and whistles mind you, but solid functionality.

Bloog is on GitHub and you probably are best off pulling the source code from there. If you are a bit old fashioned like me, and you haven’t caught the git bug yet, the GitHub has a wonderful feature that will allow you to download all of the source code from the repository with a single mouse click as either a zip file or a tarball. Unfortunately if you do that, you will get an incomplete version of the code.

I haven’t really used git, so maybe someone with more experience can verify if what I’m saying is correct. From what I’ve seen, if you are using git, you can set up something akin to symlinks that point to other projects on GitHub. When you check the code out, git will notice the dependency, and follow the link to download the latest and greatest code for it from it’s own repository and put it in the correct directory in your project. This is very neat, but unfortunately it breaks down when you use the “download code as a tarball” feature. The “foreign” code is not fetched, so you end up with empty directories where it was supposed to be.

Bloog depends on Firepython which should be in the utils/external/firepython/ directory. But it’s not and you will probably spend few minutes scratching your head to figure it out. Fortunately I stumbled upon this discussion to help me out.

Essentially, what you have to do, is to grab Firepython a tarball, and extract it into utils/external/firepython/ in your Bloog directory. After you do that, you are ready to go. Here is how my Bloog turned out: 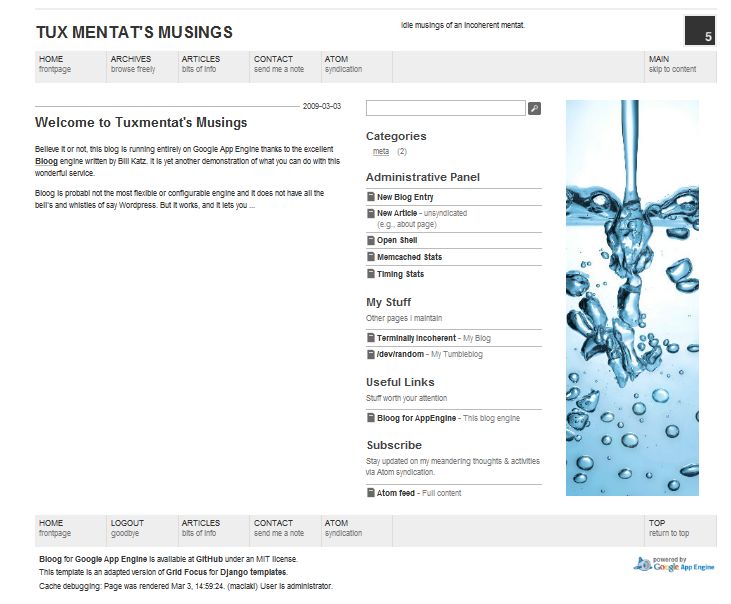 There administration UI is vestigial, so to change things such as the blog title, author and the sidebar links you need to manually edit config.py in the root directory of your project. It’s actually very straightforward – just a long associative list. There is nothing to it, and even someone with no knowledge of Python should be able to do it.

The sidebar banner (I changed it to that liquid drip thing just to show you it’s possible) is defined in a static HTML file located in \views\default\bloog\ads.html. Just delete whatever was there and insert your own personalized vertical banner or add block.

Once you do that, you can just deploy it to Google AppEngine and enjoy your own little blog. That’s really all there is to it. They could make it easier to install, but really the Firepython thing is my fault. If I used git, it would probably never happen.

There you go – yet another awesome thing you can do with Google Apps. You can blog on it, run discussion forums, create personal pages – possibilities are endless. When it first came out, a lot of people discarded it as a mere toy but it’s not. It is a glimpse of what cloud computing can do for you these days! It is a glimpse of how a lot of hosting might be done in the future.

Of course, standard disclaimers apply – you are hosting your shit on Google’s cloud for free which means you don’t really own it. And since it’s google, it will probably harvest your blog for data which it will use maliciously in it’s quest o achieve sentience. So you have to factor that into the equation when you are deciding whether or not you want to use this service.

Arguably, in this day and age there are dozens of free blogging platforms out there. Most of them will let you use your own domain name too. So running a blog on AppEngine is probably not the most efficient way to go about blogging. Bu it is kindoff awesome – and you can hack python code and you are not afraid to get your hands dirty you do get much more control over how your blog looks and what it does than with one of these free services.

I wouldn’t probably recommend running your “mission critical” blog on this platform. But for AppEngine enthusiasts like me, Bloog is yet another fun app to mess around with.

This entry was posted in programming and tagged python, web design. Bookmark the permalink.


11 Responses to Running a Blog on Google Appengine