The more I use Vista the uglier it gets. I swear, I can’t figure out what the hell were they were smoking at Microsoft when they decided this product was ready for production. I swear, Vista has been a bigger pain in the ass than Linux. People always say that Linux is not ready for the desktop. Fuck them! When I installed Ubuntu on other machine, everything worked out of the box. When I got a computer with Vista factory installed I couldn’t even connect it to the network.

Sure, you can blame my router, but you know what? No other OS had any problems with it. So screw it. I blame Vista.

If this was not enough, I recently discovered even more networking issues. Since this was a clean install of Windows, I have been downloading all kinds of software that I commonly use. IDE’s, SDK’s, tools and what-nots and it’s been taking forever. The other day I grabed a 60MB file and it took almost half an hour to download. I was sitting there staring at the Firefox download progress dialog and the speed has never actually exceed 100Kbps. Most of the time it has been oscillating between 20 and 30Kbps. It was like being on dial up again.

I knew something was wrong here. So I googled it and realized that hundreds… Nay, thousands of people had the exact same issue. It is most commonly traced to two of new Vista “features”: TCP Auto Tuning and Remote Differential Compression.

I won’t bore you with the technical details, but if you are interested this article gives a pretty solid overview of the auto tuning feature. While seemingly useful and desirable it is really just an over-optimization that may backfire if your router does not anticipate it. Unfortunately it is enabled by default. To disable it you need to issue this command as an administrator:

The second most common issue is with Remote Differential Compression which does what it says – attempts to compress the amount of data that is to be transferred over the network interface. It does that by comparing files on both sides and only moving the ones that changed. In theory it should speed up transfers but it can create unwanted overhead – especially if the remote computer does not support RDC. You can switch it off from the Programs & Features panel by clicking the Turn Windows Features on or off link on the sidebar: 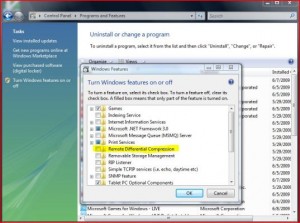 I did both. I disabled auto tuning and killed RDC, then rebooted my computer and boom! Transfer speeds were once again being measured in Mbps.

I seriously have no clue how technology-illiterate people deal with this bullshit. It no longer surprises me that tech-neophytes hate this OS with a passion. I mean I hate on Microsoft out of principle – but I was always surprised how people always told me how they dislike the new incarnation of Windows. I always figured it was mostly fear of the unknown. I doubted that they could actually understand the technical reasons why Vista is a POS.

Stuff like this made me realize they don’t have to understand it. They experience it every day – and unlike us, they don’t have enough know-how to google this shit and fix it.

This entry was posted in sysadmin notes and tagged vista, windows. Bookmark the permalink.


6 Responses to Slow Downloads Under Vista