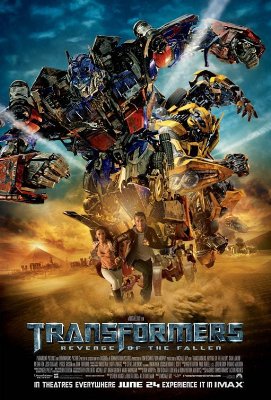 Here is a question: have you seen the first Transformers movie? If you did, you probably don’t need to see the sequel. Why? Because it is the same exact movie. It follows the exact same overall plot almost to the point of being schematic.

In Transformers 1 Decepticons are searching some enormously powerful power source hidden somewhere on earth. Sam Witwicky holds the secret to the location of that artifact. Autobots must protect him, and make sure the all powerful gadget does not fall into the wrong hands. The climax of the struggle is a huge CGI battle that involves all the robots, bunch of human soldiers, tons of military equipment that ends up blowing up and Meghan Fox running towards the camera in slow motion as shit explodes behind her.

On the other hand in Transformers 2 Decepticons are searching some enormously powerful power source hidden somewhere on earth. Sam Witwicky holds the secret to the location of that artifact. Autobots must protect him, and make sure the all powerful gadget does not fall into the wrong hands. The climax of the struggle is a huge CGI battle that involves all the robots, bunch of human soldiers, tons of military equipment that ends up blowing up and Meghan Fox running towards the camera in slow motion as shit explodes behind her.

I mean, yeah there are couple of new robot designs but it’s not like you would notice. Partly because their designs are so incredibly busy that it is sometimes hard to tell them apart. Partly because since this is a Michael Bay movie the robots hardly ever do anything other than participate in crazy combat scenes which involve them somersaulting over exploding skyscrapers while transforming and re-transforming in mid air at least 6-7 times, while shooting weapons and dodging rockets. All of this is filmed with a spinning, jerky camera, with a generous amount of lens flare and gratuitous reaction shots that show Meghan Fox’s cleavage.

So while there are supposedly bunch of new bots on each side, you pretty much just see Optimus Prime, Bumblebee, Megatron and Starscream. Oh, and and I think Ironhide is there too because I kept hearing the soldiers screaming his name every couple of minutes and he would respond something like “Ooooh, yeah!” shoot his gun and then disappear off the screen.

Out of all the other robots Michael bay decided to add to the movie he mainly decided to flesh out the following:

What else… The Disturbia boy gets humped by one of these alien lady monsters from The Species. I’m not sure what it was doing in this movie, but apparently Michael Bay thought it would be awesome to do a crossover or something. I mean when this man makes movies he assumes that his audiences are going to fast forward the talking parts to get to the boobs, racial jokes or explosions so he basically cuts out everything else out of the equation.

In fact, he actually creates this 100 feet tall deception (I think his name was Devastator or something like that) and makes him climb a pyramid just so that he can have an excuse to show the two wrecking balls strategically positioned between his legs and have a character yell out “I am directly under the monster’s scrotum!” pointing at them. I mean, you know – in case you didn’t actually get the joke, Michael Bay decided to have a character actually point at it and explain it to the audience. Testicles! Get it! Robo testes! Ell Oh Ell Motherfucker!

Bay is a hack! Everything that man touches turns into commercial, over the top, disgusting, chromium plated, exploding shit. The first transformer movie was crap, and this one is exactly the same move just longer and with more CGI. Someone actually gave this dude 200 million dollars to shot this film. What did he do? Fist he pissed all over the source material, then he shat on it, then he wiped his ass with a Transformers comic book, spent 20 minutes writing the script and went to jerk off to a picture of a tank being blown apart by a rocket fired from a jet. The man has a military fetish and it shows. Transformers are essentially background noise to the military orgy orchestrated by bay to satisfy his lust for dynamic military combat scenes. This man is fucking DYING to make a modern day war movie – but no one will give script like that to him, because they know better. After all, war is serious business (hey, just like internet) and no one wants it to turn into some talentless hacks private jerkoff material interjected with racially charged slapstick comedy.

And please don’t tell me the the movie is so shallow because source material is weak. This is not an excuse. Batman movies were all shit until Christoper Nolan turned the franchise into pure fucking gold! Up until Batman Begins people were using the same line claiming it’s just impossible to make a good adaptation of that comic book. Batman mythos, is not a cohesive story, they said. There are hundreds of different versions of Batman, all envisioned by different teams of writers and artists. Some batman stories are dark, some are campy and silly. You can’t capture all of that in a single movie. No matter what you do, some fans will be dissapointed and angry with your vision. People are just doing the best they can with the source material, so deal with it! Fortunately, they were wrong.

Christopher Nolan proved the source doesn’t matter. The man didn’t even try to be faithful to it. He did the exact same thing every other movie maker does when asked to do a comic book adaptation – he distilled the essence of the source, and wrote and original story fit his vision of the character. What made him different than all the other hacks who came before him? He took the job seriously. He didn’t set out to do a good Batman movie. He didn’t try to make a good superhero flick. He didn’t try to do a good comic book adaptation.

No! He decided to shoot an epic fucking piece of cinematography. He nailed it, and then he turned around and did it again with The Black Knight proving that the first film wasn’t just a lucky fluke. Nolan’s formula works! You can turn the shittiest book, comic or video game into a pure gold as long as you take it seriously and write a script with a real plot, populated by living breathing characters and hire skilled actors to play them. I mean, Heath Ledger’s joker was possibly one of the most brilliant performances I have seen in years. The man took a silly dude who dresses up as a clown, and made him into one of the most awesome movie villains I have seen. This is what you can accomplish when you treat the project seriously and hire real talent instead of just pretty faces.

Michael Bay didn’t take Transformers seriously. He made the first movie into a running gag reel and people lapped it up. In the second movie he decided to up the ante and he is now outwardly mocking the fans by putting wrecking ball testicles on their beloved transforming robots and them shoving them in their face.

Yes, we have been collectively tea-bagged by Michael Bay. I paid $10 to have the man dangle robot nuts in front of my face and then show me 2.5 hours of half obscured explosions, blurry CGI and Meghan Fox desperately failing at conveying any kind of human emotions.

Jesus Christ Meghan, puckering up your lips when your boobs are not in the frame and crooking your head to the side is not really acting. I mean I’m sure that this shit gave Indiana Jones Junior a never ending raging boner – it would probably drive me crazy too. And I do realize that your character is more shallow than the puddle Michael Bay left on the floor after he pissed all over Transformer toys before he started shooting this move. But when you confess your love to your boyfriend on his deathbed you could at least try to pretend you are a real human and not a sex-bot from an Austin Powers movie?

Oh, Shia LaBeouf: can you be more spastic? I don’t think you were spastic enough in this movie. Yes, people apparently love to see you talk really, really fast, twitch and stutter so do more of that – cause fuck acting, man!

Worst part is that these two crazy kids are not entirely at fault for failing at acting here. Who I blame? Michael Bay of course. You know how I know? Because Scarlet Johanson pulled the same shit in The Island. She was told to stand behind the main lead, look pretty and pucker up her lips when her boobs were not in the frame. And last time I checked Scar did know how to fucking act. I mean, God knows he can’t sing (her songs are on youtubes, my ears are still bleeding from the last time I heard them) to save her life, but she does have a couple of Golden Globes and a BTFA award on her mantle so you can’t deny her acting skills. But of course Michael Bay didn’t put her int the movie for her acting.

I once had this idea of putting Michael Bay and Uwe Ball in a rocket and shooting it directly into the center of the sun. But then I realized that each one has an ego as massive as a black hole. At high pressure and temperature their egos would probably fuse together creating a supper massive singularity that would swallow the whole solar system. So I sort of gave up on that idea. Still, the man is a hack and Transformers 2 is the shallowest, dumbest, simplest and probably the most successful movie of this summer. The audiences loved it, up until and including the robot testicles.

Michael Bay is probably laughing all the way to the bank while I weep knowing that he will probably get $400 mill more do this one more time. Get ready for Transformers 3 kids: with more boobs, more explosions, more slapstick comedy and less plot – cause, fuck it – it is a third movie. Everyone already knows the plot, so we can just get down to business and not even bother with that shit.