Protip: if you don’t want people taking your images and posting them all over the internet, do not put them online. In fact, do not make them available in an electronic format – ever! Just sell hard copy prints. As soon as you convert your image into a jpeg or a png and give it to someone, chances are they will make copies. Then people will make copies of the copies, and sooner or later your image will end up somewhere on the internet.

Blocking the right mouse click via Javascript is not a solution, because most people these days know how to get around that trick. And no, they don’t even have to know how to disable javascript.

You see, most of these scripts are found somewhere on the internet, and then copied and pasted to the offending websites. Unfortunately, roughly half of them are badly written and work only in IE6 and 7 but fail in modern browsers such as Firefox. A lot of times when I encounter these scripts I simply need to close the alert box that pops up, and once it is gone my context menu shows up anyway allowing me to save the image.

Oh, and a lot of people know that pressing Print Screen will take a screenshot that you can later crop to get a copy of the image. This doesn’t always work for high resolution stuff, but if you just want a small or medium sized pic, this is probably the easiest way to do it.

I understand that an artist who sells high rez copies of his/her work might want to protect their stuff. This is really not the way though. For example, look at all the major websites that sell stock images. They don’t even bother with the right-click blocking tactics – the know better than that. Instead, they put up low-rez, watermarked copies on their website, and hide the high rez stuff behind, requiring a credit card payment before they give it up. Most of the time they don’t care if people steal the samples – they are watermarked and therefore mostly unusable anyway.

What kills me is the websites that try to protect their stuff even when it doesn’t make sense. Let me give you an example – I recently found this funny shirt at the Zazzle.com online store.

I was like, let me tumbleblog it and link back to them. Sadly, when I tried to grab the image I saw this: 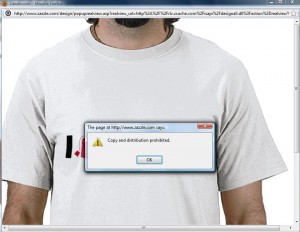 Not only is this ineffective, but also a bit silly. Here I am, trying to send some traffic their way and they throw obstacles in my way. I mean, what is the purpose of “appearing to protect” the images of the products you sell? I mean, the image itself has no value. They make money on selling the actual physical product it represents. So you would think that having the image shared on the internet would only improve their business. People would see it, an be like “dude, where do I buy that” – and someone would google it and then comment back with the link to Zazzle.com. How is that bad for them?

I mean, what is the worst that could happen if their image was “stolen”. Someone puts it on the internet and doesn’t link back to them? Someone makes an identical t-shirt on Caffepress? Well, that’s when you send a lawyergram to the company that put up the store and get it booted off the internet. Sadly, they can make an identical tshirt design whether or they copy that low resolution image from your website.


10 Responses to Don’t Copy my Image!