I was a bit skeptical about Reality Disfunction by Peter F. Hamilton. One of the reviews I read compared it to David Brinn’s Uplift Saga saying it was just as good, if not better. That worried me because I didn’t like the Uplift saga. It seemed silly, infantile and too schematic. 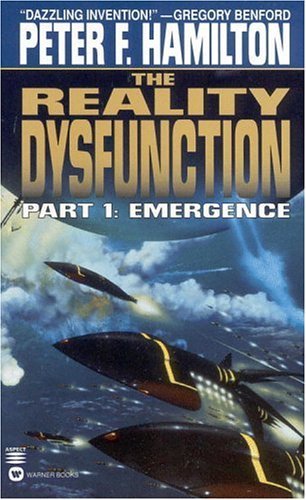 Then again, I bought both books around the same time, and it would have been a waste if I didn’t even give it a chance. You see, I buy books in bulk. People don’t believe me when I tell them this, but each of my raids at the local Barnes & Nobile ends up with me dropping down minimum of $50 and going home with at least 4-6 titles (or you know, depends on how many of them are $5 paperbacks). Either that or I just raid my computer and buy bunch of books at amazon. The only reason why I’m not broke because of this habit is that I tend to be a slow reader when it comes to fiction. So a single shopping spree can keep me occupied for months. That and a fact that I’m not an impulse buyer. I will never buy a book on a whim – all my selections are carefully researched and agonized over. You literally need to give me a heads up when you want to go to a book store so that I can do the research. Or I can just use my trusty blackberry, load up my amazon wish list and get the relevant titles out of there. I love technology!

But let’s get back to Reality Dysfunction. I’m actually quite glad I picked it up because it turned out to be a very decent piece of science fiction. I’m not going to lie – I really enjoyed the book. Hamilton is a bit long winded, and his writing sometimes falls back on common tropes but I still enjoyed every single page of his book.

It’s probably a good time to mention I got the Warner Books edition rather than the Orbit one. You see, Warner Books decided that a thousand pages is a lot and so they broke the novel into two parts subtitled Emergence and Expansion. You thought I was kidding when I said the guy was long winded, eh? That’s nothing though – the book is merely the part of a trilogy which clocks at over 3 thousand pages in total. A man after my own heart!

The book which I read was Emergence and this is what I’m using as the basis of my review. I already purchased Expansion but I haven’t had a chance to read it yet. I’m just letting you know in case you have read the Orbit edition which consolidates both parts into a one fat volume.

Let me briefly discuss the plot of the book or rather the setup for the plot. You see, Emergence basically sets the stage. Hamilton slowly introduces us to his universe before he moves the action forward. I guess the most distinct feature of this world as opposed to other deep space SF tales is the split of the human race into two distinct subspecies: Adamists and Edenists.

Edenists are sort of like the Ousters of this universe. They dabble in bio-technology, create living ships and self aware space habitats. The cornerstone of their technology is the “affinity gene” which allows them to telepathically communicate with each other, and with their living spacecrafts and servitor drones. In fact, the affinity is what makes an Edenist an Edenist, since Adamists do not completely reject genetic manipulation.

Adamists are essentially people who chose not to get the affinity spliced into their genome. A lot of them did this for religious reasons, since the church openly condemns such practice. You could say that they are baseline humans, but many have been genetically enhanced for longevity, general health or ability to spend a lot of time in zero-g without the usual side effects like muscle atrophy and etc..

Hammilton doesn’t portray the two races as enemies though. Both Edenists and Adamists tend to coexist more or less peacefully, trade with each other and even interbreed. There are big cultural differences, prejudice and social friction of course – but there are no large scale racial wars.

Each of the early chapters of the book is almost it’s own self contained short story. Each takes place in a different corner of the universe, and shows a different aspect of Hamiltons’ world. And almost all these locations are interesting.

For example, we have an orbital station parked next to a gigantic ring of debris left by some alien civilization. No one knows who these aliens where, but it is certain that one day their whole space colony composed of thousands off habitats was destroyed. The exact details are a mystery and the station becomes a hub for researchers who want to study this civilization, alien artifact collectors and brave treasure hunters who explore the ruins trying to find intact objects of value.

Then there is a brand new colony world called Lalonde where prospective colonists can buy plots of land and become farmers. Hamilton paints a great picture of the hardships and problems facing early stage colonists trying to civilize an alien world. Lalonde is a wonderful world of contrasts where high technology is juxtaposed with primitive, low tech standard of living. For example you have colonists cutting trees with fusion blades in order to build log cabins, using laser rifles for hunting and etc..

There are descriptions of Edenist habitats with their advanced bio-tech, and pastoral worlds where certain technology is prohibited. So people ride around in horse drawn carriages and steam engines but still use telephones and personal computers.

The book is chock filled with great ideas, detailed descriptions of alien worlds, technology and other world building details. If you are into that kind of stuff like me, you will love it. If you are one of those people who can’t sit still through few pages of characterization, or explanatory notes you will probably hate it.

Hamilton’s characters are likable and interesting, but they tend to fall into easily identifiable roles. For example, the brave space capitan Joshua Calvert is literally too awesome for his own good. He is like Han Solo cubed. He gets all the women, he always has a clever plan, he is brave and stubborn to the point of stupidity but he always gets out of trouble due to his luck based superpowers. He is nowhere near as bad as Tom Orley from Startide Rising who was pretty much invulnerable and without a flaw. Joshuas’ awesomeness is made bearable by the fact that most of the time he is merely flying by the seat of his pants.

Quinn Dexter, the guy who is shaping out to be a major antagonist has the opposite problem. His whole story is a long chain of Kick the Dog events that reinforce how bad he really is.

Then there is Ione Saldana who seems to be a walking wet dream – beautiful, sexy, sensual, too clever for her own good, eloquent and cute as a button.

Of course the fact that these characters are cut out of standardized templates doesn’t make them any less interesting or likable. And the fact that there is quite a few prominent, and secondary characters in the story means the design flaws in particular individuals are not as jarring.

All in all, the book was very enjoyable and I’m planning to read the whole trilogy unless the quality starts to sharply decline in the next few books. It is solid science fiction. It’s not as ambitious and well written as Frank Herbert’s Dune, and it’s not as clever and well executed as the first Hyperion book. Still, it is a great read and I highly recommend it.