Zombie outbreaks are a recurring theme here. We have already discussed our Zombie Survival Plans™ in much detail. The general idea was to try to get away from urban and suburban areas and head North into Canada and Alaska territories. The reasoning was fairly simple – if you are away from human settlements, you are less likely to encounter a hungry horde of undead. In addition a colder climate may be advantageous to humans who have constant body temperature, and can use fire (and other sources of heat) or bundle up in thick winter clothing. Zombies on the other hand will be exposed to the elements and are likely to freeze solid in the winter. This is especially effective against the “fast zombies” which tend to be victims of some sort of a virus rather than the more traditional true undead. The former probably wouldn’t survive the winter, while the latter would eventually thaw out. Still, a season without the living dead is still a pretty good thing.

If you see this outside your window... Run!

So that’s pretty much the plan. We had slight variations on the theme but “going where there is no people” was universally accepted as the optimal solution. What we didn’t discuss in much detail is gear. What do you think would be useful to have during a zombie outbreak in terms of equipment? Let’s try to be practical about it too. Of course it would be nice to have a year’s supply of canned food, an armored truck or an assortment of weapons but you likely won’t have any of that stuff at hand when shit hits the fan. Let’s say you wake up tomorrow, and realize that all your neighbors have been infected and are roaming the streets looking for new victims. You only have few minutes to gather few things and make a run for the car – if you stay to long, or make too much noise packing you may draw attention to a whole horde of undead.

Ideally, you would want to have a zombie survival kit, all ready to go. Like a big backpack you can stuff under your bed, or into the trunk of your car. This way you don’t really need to think about packing. Just grab your kit, and run. Once you are out of immediate danger zone, you can worry about collecting other stuff – such as canned food, weapons, ammo, etc. That’s your loot list – things you will be looting and/or appropriating while on the move, or once you establish a temporary base of operations somewhere. You can write down your loot items along with their potential locations and stick that in your pack. What other necessities would you put in the kit?

Comfortable Shoes and Change of Clothes

You definitely want to put a pair of comfortable hiking shoes in your pack. Zombie apocalypse is very unpredictable, and you can potentially be forced to run away from your home wearing nothing but boxers and flip flops. That’s why you are making this kit anyway, no? So you don’t actually have to worry about changing. It is a good idea to think utility rather than style here. Since we might be migrating North, you probably want clothes that will keep you warm, and protect you from the elements.

It’s probably a good idea to get a few road maps in the pack just in case. A road atlas doesn’t really take that much space and it may prove invaluable if GPS goes tits up. I’m not actually sure how much daily maintenance is needed for the system to function properly. I mean, chances are that it will continue to work properly for quite a while seeing how the satellites themselves are solar powered and out there in space away from the zombies. Inevitably however it may fall out of sync, or deteriorate to the point where it is unusable. In fact, GPS is already in the need for some serious maintenance so without people to monitor it, it’s likely to fail sooner or later.

You will probably also want a good compass for those times when you get off the main roads, or when the road navigation becomes difficult due to destroyed road signs and landmarks.

Since you will likely be running away from centers of civilization, you may eventually run out of fuel, batteries or ways to recharge your equipment. You should therefore make a point of equiping yourself with tools that do not need an external power source but can instead be winded up or powered in some other way. 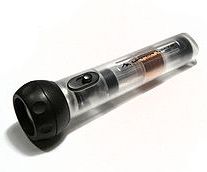 For example, it is a good idea to get several of those kinetic flashlights that can be charged up by shaking them, or with a hand crank. They are silly novelty items right now, but if you are in the middle of nowhere, or if civilization have collapsed they may be extremely useful.

You should also purchase an automatic, self winding watch. I know, I know – no one wears watches these days unless they have a Rolex logo on them and are used as a status symbol rather than time keeping device. Just put it in your pack. Then when your cell phone battery dies, and you are forced to ditch your car you will have an alternate time keeping device. Don’t underestimate the usefulness of having a watch – it can help you navigate, calculate distances and etc..

You might also want to get yourself a clockwork radio to listen for live broadcasts. Surviving packets of civilization will likely have emergency broadcasts running 24/7. Catching these signals may save your life. If you catch such a signal, you should immediately try to pinpoint the location of the survivor camp on your map, and then do your best to stay few miles away from it at all times. Unless of course you don’t mind your gear and food being taken away from you and redistributed among the locals. Oh, and if they are starving you may get eaten. So yeah.

You will also need some hand cranked walkies. Even if you are running alone, you will likely run into and potentially team up with other survivors at some point. And having a way to communicate that does not require electric power or working cellular network.

Of course some of your items may not be available in clockwork/windup version. So it might be a good idea to invest into some solar panels. For example, you could get one of those solar charged backpacks or a foldable kit that can be rolled up and stashed somewhere with the rest of your gear. These devices won’t yield much power but they could give you enough juice to use a laptop for a few hours, recharge a cell phone, and etc..

It goes without saying that you should also take some regular survival gear. Chances are you might be forced to sleep outdoors on some nights so packing ne of those ultra-light micro tents, or a bivy bag is definitely a good idea. You will definitely want one of those mylar space blankets too. You also want a decent sized first aid kit.

Now, we all know that if you are bitten by a zombie you are pretty much done. That’s a given. But zombie related wounds are not the only injuries you have to worry about. You are likely to fall down, cut yourself while shaving or even get shot and having basic medical necessities may increase your chances of survival or prevent you from getting a nasty infection.

You will also need a good hunting knife, and a multi-tool. Other essentials are a length of rope, duct tape, sawing supplies (to patch your clothes and/or tent) as well as a fishing line, some hooks and baits and etc. You probably would want to grab one of those mini survival kit tins, or put one together yourself. They take very little space, and can be crammed with all kinds of goodies.

You definitely want to pack some waterproof matches a zippo lighter with some fuel and Ferrocerium rod or two. Eventually the matches and the lighter fuel will run out, and you may or may not have a chance to resupply. Trust me, you don’t want to be making fire by rubbing two sticks.

You should pack some bottled water and MRE type consumables. Water, especially will weigh you down and it is one of the things that will probably be easy to loot or obtain naturally. You can probably safely drink rain water, river water or even melted snow after you boil it. MRE’s tend to be light weight and will let you survive the first few days.

This might be a problem, depending on your state laws. If you do own a gun, or can purchase one legally you may include it in your pack. Otherwise this should be one of the things to put on your loot list.

What weapon is best against zombies? This tends to be open for a debate. I’d think that a high caliber pistol is probably most practical (with regards to stopping power, portability and ability for an average person to obtain). Then again, unless you had some basic training, or spent a lot of time at a gun range you probably would want something like a sawed off shotgun. It has a lot of spread so it’s hard to miss and a head-shot at close range would likely put a zombie down for good. Or at least one would hope. Of course there is a catch – sawed-off shotguns are illegal in US. So, yeah…

Ok, so we have our essentials in a pack. What should we loot and in what order? I recommend the following list:

Now it’s your turn. What did I miss? What else would you include in your pack? What else would you put on your loot list. My brother had some original ideas for the loot stuff. Maybe I can convince him to come by and comment. If not, I’ll append these things later. Let me know what would you put in your kit, and the stuff you think needs to be looted to ensure survival.

This entry was posted in futuristic musings and tagged zombie. Bookmark the permalink.