Farcry 2: Bored me to tears

Picking up Farcry 2 was a mistake. I just could not get into it. I really tried – I intended to give this game a chance. After all, it is an FPS and I generally enjoy FPS games. It is a sandbox games, and I love that type of game play. I did hear that the game didn’t really shine in the plot and character development departments but neither did games such as GTA and they always kept me occupied for quite a while, despite the DIAS factor.

GTA games however had one amusing factor that kept me playing them even after I gave up on the story mode missions: joyriding. I would just steal a bike, hop on a highway and drive in circles as fast as I could without stopping. Half of the fun of these games is exploring the huge cities and fining interesting places. 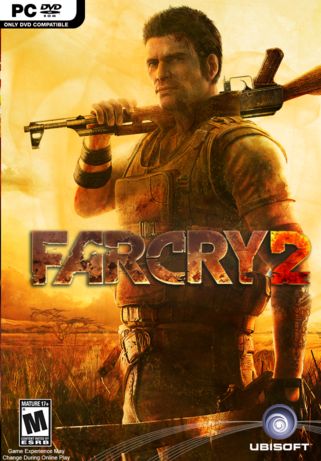 Farcry 2 - so far, it was so boring that I cried

Farcry 2 claims to be a sandbox game but it the emphasis here is more on the box rather than on the sand. The map is indeed huge, but you can’t explore it freely. They box you into clearly defined areas by putting hostile checkpoints at every single intersection. It’s pretty much like playing your average GTA game but you have like 3-4 star wanted level all the time and there are road blocks everywhere.

Not only that, but outside the clearly designated “cease fire” areas all NPC’s hate your guts and want you dead. They hate you so much that they will drop whatever they are doing and chase you down across the whole map if they as much as smell you. Which makes little sense since their primary function in the game is to guard their checkpoints. They are soldiers and that’s their mission. And yet, if they spot you they will abandon their mission, jump in their cars and chase you as if they were Captain Crais to your John Crichton.

Um… Do I need to explain that analogy? Seriously people, you need to watch yourself some Farscape. Basically, it’s the show that Joss Whedon was watching before he wrote Firefly (well, at least I think he did). Anyway, John Chichton accidentally kills Crais’ brother which prompts the captain to ignore his orders, turn his ship around and chase after him. So yeah – it’s a bit like that. The NPC’s in the game hate you as if you personally killed a member of their family. And they can spot you from a mile away, even if you are crouching in some bushes behind a tree.

Of course you can try to be smart and go around the checkpoints, but the map designers specifically use impassible terrain to create natural choke points. They put cliffs, rock formations and mountains that funnel you toward the main roads. And when they couldn’t justify putting any of these things on the map, they just put thick jungle and bumpy terrain and rivers all around so that your car gets stuck. So you end up running everywhere, and you learn to be really good at wall walking around the camps. But that’s sort of defeat’s the purpose.

Then you discover the bus network that can take you to the key points on the map via the magic of loading screen and you end up using that instead. Which is not very sand-boxy either.

I mean what is the point of having this huge map with all kinds of environments if the design discourages any kind of exploration. The only non-annoying way to play this game is to learn the buss network, fast travel to your goal, and then back to town for more missions. If you want to explore you have to stop every 3 minutes to kill the same group of 5 guys defending a checkpoint. Does that sound like fun to you?

But that’s only half of the story. Too keep you on your toes, there are also random encounters. Every once in a while an enemy vehicle will just materialize somewhere off screen and try to ram you or shoot you to pieces. I’m sure it seemed like a great idea during the design phase, but in practice it is just about the most infuriating thing that could happen to you.

Let me break it down for you: I just cleared a checkpoint 2 minutes ago. If I turn around now, there will be dudes there again. There is another checkpoint down the road that I will reach in about 2-3 minutes. There is nowhere for me to run. If I try to get away from my random encounter pursuers, I will end up in another hostile area and get 2 or 3 more cars on my tail. So the only way to deal with a random encounter is to stop the car, and fight. Which is incredibly annoying if you are actually trying to accomplish a mission of some sort.

Did I mention the insanely aggressive AI that treats your very existence as a grave offense and will stop at nothing you erase you from existence? Let me give you and example. I’m sitting hidden in the bushes behind a tree trying to snipe at the enemy camp that is barely within range. I can hardly even make out the silhouettes of the enemies from my position. I take a shot at a lonely soldier that wandered away from the camp. There is a big building and a stretch jungle of between him and his buddies which tells me they won’t be able to see him. I miss – clearly I was out of range or I just botched the shot. Guess what happens?

The guy looks directly at me and starts shooting. Every single other fucker in the camp gets into a car and starts driving straight at me foaming at their mouths.

First, the guy I was sniping at shouldn’t be able to see me. Sure, he could have heard the gun shot but how the hell could have spotted me? His wasn’t even facing me when I took the shot. Second, how the hell did his buddies know what has happened and where I was hiding? They didn’t have line of sight to the guy I shot at – there was a fucking building in the way. They shouldn’t see me, since I’m crouching ass high in bushes, behind a tree, fifty million miles away from them. And yet they knew. As soon as I took a shot, they knew. This is not the end though. As soon as I saw them freak out, I bolted out of my hideout, run down from the hill where I was hiding, swam across the large lake, got back into my car and drove away taking shortcuts trough the jungle. I assumed that the enemy would give up the chase rather than circle around the hill, the lake and then follow my trail through the jungle. They didn’t. They caught up to me some 15 minutes land two checkpoints ater when I accidentally wedged my car in between two trees and could not get it out. I sort of assumed that such blatant AI cheating was a thing of the past.

There were some things I did like in this game though. For one, the developers really pulled out all the stops to make it as immersive as possible. It follows the HL2 school of never leaving the first person perspective and extends it even further. For example, when you want to look at the map, your character actually pulls out a map and holds it in his hands along with a compass. When you need to heal yourself you pull out a syringe and give yourself a shot. Or, if you are wounded you will actually use pliers to remove a bullet from a wound. When you are knocked down, your character actually uses his hands to push himself up, or grab nearby objects for support. It’s very well done.

Also, when you are in town and you aim at friendly or neutral NPC’s they will freak out. They will usually raise their hands or go “Woha… take it easy man” and start slowly backing away from you. I haven’t seen this sort of thing implemented in that many games and I like it. I actually spent several hours doing just that – walking up to people, putting a gun to their head and watching their reactions.

Farcry 2 is full of little delightful game play details like this. The first hour or so is filled with “hey, that’s neat” moments. Unfortunately it goes downhill from there. The novelty of the immersive gameplay elements wears down fairly quickly. The sense of huge sandbox world evaporates completely after you realize it is actually a series of boxes connected by guarded funnels that are the enemy checkpoints. And the story… Well, the story is somewhere in there but I just couldn’t get into it.

You are some sort of mercenary, and there is a guy named Jackal you need to find and presumably kill but you get bogged down by the local politics or as we call them: the side missions. You see there some sort of armed conflict taking place between two or generic factions. It’s a fairly standard situation that region – it involves diamonds, foreign control, freedom fighters and etc. It sounds mildly intriguing at first, but it was not. The problem was that half the time (make that all the time) I couldn’t even tell the difference between faction A and faction B. Or rather really didn’t give a flying fuck and made no effort to pick up on the subtle differences between them.

I tried to listen to the dialogs but I find myself yawning through the cut scenes. I just really, really did not care about the missions because they were bland and generic just like the NPCs’ that gave them to me. Nothing the story or setting really interested me. Neither did the sandbox exploration aspect. I have never actually thought that war torn Africa with it’s cut-throat politics, corruption, diamond trate and penchant for spawning minor and major war lords could be this boring.

Ok, here is the deal: Crysis was very linear, but you could really have fun stalking the enemies in the jungle. You could play a sniper, or cloak yourself and take out sentries from up close. Killing a guy who was patrolling the area on his own did not usually alert the whole enemy base. When you were spotted and you could easily loose your pursuers by cloaking, moving around and/or taking cover. It had a sandbox like gameplay without an actual sandbox. Farcry completely fails to embrace in this area. Stalking and sniping are really not an option. The only effective way to clear each checkpoint is to lob it with grenades, and then go all in, guns blazing and rip the survivors apart at close range.

I did not care for this game, and I already eradicated it from my hard drive to make space for bigger and better things.


4 Responses to Farcry 2: Bored me to tears