Ghosts in the Machine or Why Does Your Computer Hate You

You can’t blame your computer for crashing, being slow or losing your work. If it is behaving in a funny way, then it is problem with you – it’s operator. You are doing something wrong. Or did in the past, and now you are paying the consequences. Barring unforeseen hardware issues and unpredictable software bugs, almost every computer issue can be traced back to you. Why? Because computers don’t do stuff on their own. They are dumb machines that need to be directed and configured to work properly.

And yet, people insist on treating them as if they were conscious, living beings. They curse at them, blame them or worse yet – give them cute names. It’s not only silly but also counter productive. This behavior is basically empathic imprinting. Personification slowly but surely imbues the inanimate machine with either positive or negative emotional discharge. It pools up inside of the machine, fills all available spaces, covers every inch of the surface and then starts thickening. After several months of being bathed in waves of unrestrained empathy, the concentration is high enough it starts acting like a spectral equivalent of the primordial soup. It becomes a bubbling cauldron of psychic emanations. Sooner than later there is a spark of cognition, and the whole thing coalesces into a non-physical emphatic sophont entitiy. For the purpose of this article I will refer to these entities as “Machine Spirits (or MS)” but they are not true ghosts – at least not in the way we understand them. An MS specimen is nothing more than an empathic echo. While sapient, it’s thought patterns are shaped entirely by the emotional input provided by the human. As such it is incapable of exhibiting emotions other than it was exposed to. Being a specter born out of emotional energies it usually possesses no logical faculties and exhibits highly irrational and capricious behavior. 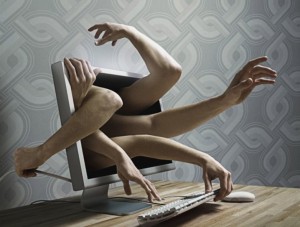 The exact patterns of course depend on how the user treated their physical host (ie. the computer). For example, people who think the computer hates them, will give a new beginning to a being that knows little more than hate. Those who despise technology will have to deal with spiteful specters. Machines that were pampered and loved on the other hand will loving and playful personalities. This may not seem like a bad thing, but you have to remember that these beings are purely irrational, run on raw emotion and are incapable of reasonable thought. Thus a loving spirit for example decide to manifest their fillings by arranging bits on your hard drive into pleasing patterns irreversibly corrupting your data in the process.

What’s worse, since Machine Spirits are bound to a physical host and manifest in the physical universe rather than the spectral realm, they must have some mechanical means for their cognitive processes. Most (if not all) MS entities learn to steal CPU cycles and reserve memory areas for their own purposes which severely degrades the performance of the machine they inhabit. This is precisely why a brand new store bought computer is usually blazing fast for about a year, and then slows down, eventually grinding to a halt. It usually takes anywhere from 6 to 18 months for a user to successfully imprint an emotional echo on a machine and create an MS entity. As the specter grows and matures it requires more and more resources which explains a sharp decline in performance on machines that are over 2 years old.

MS entities enter dormant state when the hardware is powered down. They are irrational beings and their minds and emotional patterns are fully formed “at birth”. Still, over time they acquire new experiences which can alter their personalities. Unlike their original makeup these experiences need to be physically stored somewhere. Most MS entities steal hard drive space to accomplish this. This is why many users with MS infected machines often notice shrinkage of free HD space, but are unable to explain where that space is used.

There are two known ways to remove an MS entity from a piece of hardware. First one, is naturally the wipe & reinstall procedure. Unfortunately id does not guarantee removal of the spirit, but it can at least “reset” it to it’s original state by wiping it’s experience cache from the hard drive. Sometimes this experience is traumatic enough for the MS entity to self terminate or go into an indefinite dormant state.

The other method is starvation. While MS does not actually feed, it does thrive in environments rich in emphatic emanations. Of course it is a highly subjective, and finely tuned emphatic receptor that can only detect emotional waves directed at its physical host. It remains ignorant of all other emotional background noise. Since MS entities have no sensory apparatus (and no, they actually can’t learn to operate web cams and speakers) emotional deprivation works similar to sensory deprivation in living beings. It will slowly drive them insane. But unlike physical entities, specters can essentially will themselves out of existence. In other words if you stop personifying your computer, it’s embedded persona will eventually go away.

The problem with his that experienced machine ghosts develop defense mechanisms against this technique. They will for example try to provoke emotional response from the user by crashing the system, corrupting data and causing all kinds of other mischief. In worse case scenario they will dump themselves to hard drive and go dormant for a while but without releasing any of their tied up resources. This is why this method is most effective when combined with reformatting and re installation of the OS. A confused, vulnerable and freshly amnesiac MS will be much easier to starve than a a malicious ghost with baggage of experience to draw on.

Neither of these methods is 100% successful, and you have to keep in mind that the entity may still take over your box after sufficient amount of time has passed. Once you get a machine spirit, getting rid of it is very difficult. Buying a new computer is usually the only solution that works. But if you keep personifying the new machine, it will eventually develop it’s own specter.

The solution? Don’t do it! Your computer is a machine. It is a tool. It is an extension of yourself. It has no personality, and no mind of it’s own. Stop pretending like it does. Stop talking to it. Stop blaming it for your own mistakes. Stop talking about it as if it was alive. Don’t ever personify it – even jokingly. Don’t even think about it as an entity of it’s own. A computer is a conduit of your will – a transmission medium that connects you to the internet. Nothing more. If you think of it in any different way, you are just asking for trouble.

All of this also applies to modern cars which have computerized on-board diagnostic systems. Did you ever have that annoying “check engine” light flashing on your dashboard for no reason whatsoever? Yeah, now you know why. Don’t fucking personify your car either!

This post is part of the computers are magical cycle, which aims to explain advanced technology to lay people in a way they can relate to: by equating it to magic and inventing ridiculous mythology around technical subjects that will promote good computing via blind indoctrination, fear mongering and general misinformation.