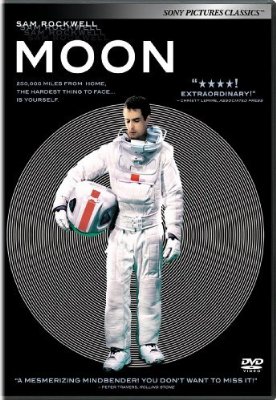 The problem with Science Fiction movies is that so many of them are complete and utter shit. Hollywood doesn’t really understand this genre well, and usually uses it to stage their special effects intensive summer action flicks. The hallmarks of a popular SF movie is a non-existent plot, cgi explosions, fast paced, cut intensive editing and cringe worthy dialogue. Either that, or they veer in the direction of gory futuristic space based horror.

Every few years though they manage to release something decent. I’d even say exceptional. An example of such inspired production is Moon. And please don’t confuse this fine film with “New Moon” which is nothing but a visual diarrhea devoid of all meaning or value.

Moon is clever, well made and intriguing science fiction story about astronaut Sam Bell – the sole operator of a corporate lunar mining station. His 3 year mission involves maintaining and supervising a fleet of automated harvesters which process the dust on the dark side of the moon to recover precious He3. Unfortunately to contact Earth, he has to bounce a radio signal of a lunar satellite which malfunctioned shortly before he arrived. Sending a repair team is a very low priority, since the base can still call home via a “Jupiter” link with only few hours of delay, and live communication is not necessary to accomplish Sam’s mission.

Three years without talking live to a person is a long time, and it does take some toil on the hero. His only companion on the base is a robot (voiced by Kevin Spacey) who is basically a mobile version of Hall from Space Odysey. It’s basically a box with a camera eye that rides on network of ceiling mounted rails. Despite being somewhat loopy at times however, Sam is holding up well. At least until he has a tiny accident on the surface, after which, everything changes.

I know what you are thinking – I had the same reaction when I started watching this movie. At first I assumed this is going to be a “Dude goes crazy from loneliness and has vivid hallucinations” story – but it is not. It is also not a story about the AI going crazy and/or rebelling against it’s human operator. The rail mounted mechanical dude is actually a good guy in this film.

What is is it about then? I’m not going to say. It would ruin the twist – and yes there is a fairly well executed plot twist there. I recommend not reading any spoilers before watching it. In fact, I may have already said to much in this very post.

Being mostly a one-man-show the quality of this film hinged mostly on Sam Rockwell’s acting ability, and I am pleased to say he delivers a stellar performance. This was a very demanding role, and pulling it off was not a small task so he deserves a lot of credit for doing this.

If you are game for some high quality, smart, well written science fiction you should put Moon on your “too see” list. If you are craving action, explosions and something fast paced then avoid it at all cost. Hollywood will be releasing something right up your alley any day now.