This post talks about the end game events and so it will be full of spoilers. If you have not finished the game yet, I recommend skipping this post entirely. Unless of course you don’t care about getting spoiled, or Dragon Age for that matter.

I have to say I really enjoyed the twist at the end of Dragon Age. It was a very dramatic moment, more so because of my choices in the game. Depending on how you play the game, the last few scenes before the final battle may or may not be very emotionally charged. What got me the most was Morrigans proposal and her ultimatum. But let me give you some background first.

Throughout the game I relied on Morrigan to be my offensive mage. I used Wynne as a healer/buff specialist, my main as a tank and I speced Leliana as Assasin to act as my secondary tank and DPS. This worked extremely well, but Morrigan was always the lynchpin of all my strategies. Having two squishy mages in the company required me to do a lot of clever crowd control. I would always control Morrigan directly, and allow the rest of characters fall back on the tactics, unless I needed them to do something specific. I got pretty good at freezing enemies, putting them to sleep and otherwise cock-blocking their advances using magic. As a result, the bitchy, selfish witch of the wilds was my most important character in the whole company. If Wynne was incapacitated, I could still survive healing my characters with potions. If I had to leave Leliana in camp, I could still win most of the combats – I would just have to forget about opening any closed chests. But whenever I lost Morrigan things would become bad real fast. 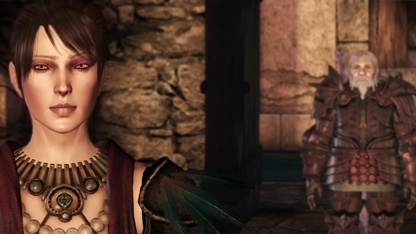 Oh hai Morrigan, so nice to see you in my room. I'm totally hoping you are not going to betray me, break my heart and totally fuck everything up for me.

To put it plainly, I needed her. I needed her very badly. Without Morrigan, there would just be no final battle. Without offensive magic the Archdemon would easily walk over my party. Not only that, but she grew on me. Most people hate Morrigan but I sort of enjoyed bringing her along on all the missions. Not everything she said was stupid or annoying. Sometimes Morrigan was a much needed voice of reason. Sometimes she was just amusing, always trying to be as unpleasant as possible. In fact, I loved the scene when she admitted that despite her best efforts, she inexplicably fell in love with me and that it is stupid, disgusting and irresponsible. Then she gave me a ring that would allow her to stalk me, and make sure I’m not sleeping around or anything. Oh, Morrigan – creepy, evil to the core, but you got to love her.

Imagine my shock when she approached me with her insidious deal the night before the final battle. Actually, shock is a wrong word here. It’s not like I was surprised. It was a very Morrigan thing to do. I half expected her to do something evil at one point or another. So I was not surprised when she offered the deal. At any other time I would just brush it off and tell her to go to hell. But she picked the exact moment when I needed her. She knew that I had to give in to her, and so did I. There was just no other way. I fucking needed that bitch, relied on her and she played me like a pawn for her own selfish needs.

You see, at the end of the game it is revealed that only a Gray Warden can kill the Archdemon (aka. the final boss). If anyone else was to slay the beast, it’s soul would simply enter the body of the nearest Darkspawn and immediately transform into it’s true dragon like form and continue fighting. The thing was virtually immortal, and unstoppable. Gray Wardens however found a way to kill it. They would expose themselves to the taint, and become part Darkspawn themselves. As a result, the Gray Warden delivering a killing blow on the Archdemon would technically be the closest Darkspawn. But unlike true Darkspawn who are mindless beasts and empty vessels, a Gray Warden would have a soul, and could not be taken over by the Archdemon. Instead the attempt to do so would destroy both the Archdemon and the Gray Warden who killed it. In other words, the only way to destroy an Archdemon was to sacrifice a Gray Warden.

You as a player have a choice to sacrifice yourself, or Alastair (or Loghain if you spared his life earlier). In my play through I killed Loghain and convinced Alastair to marry Queen Anora. He was going to be the king, and preserve the royal dynasty and hopefully keep the shifty queen from doing something stupid. The people needed him, and let’s face it – I genuine liked the character. I knew I couldn’t let him sacrifice himself – even though he wanted to. I made the decision to kill the fucking Archdemon myself before I even left the room. I was determined to be a hero and a martyr – to die a heroic death.

Then Morrigan approached me with her proposition. She offered to save my life in exchange for a little favor. She knew this ancient ritual that would allow her to “capture” the soul of the Archdemon. All I had to do was to impregnate her that night. Do to the fact that I was a Gray Warden the baby would be tainted, and thanks to the ritual it would act as a vessel for the Archdemon. Upon delivering the final blow, the demons soul would seek out the unborn baby and enter it instead of me. Morrigan would then leave and raise the baby on her own. 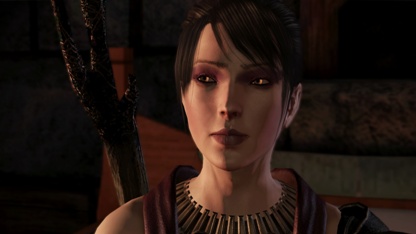 This is probably the one time during the game that you actually should not sleep with Morrigan.

In other words, the Wicked Witch of the Wilds wanted me to help her create some super mutant baby with a soul of an old god. Some sort of an abomination hybrid, that would be not only scary but also insanely dangerous. She wanted me to allow her – the half-feral, half-insane, deranged, despicable evil bitch to raise this super powered demigod on her own. It was crazy. More than that – it was fucked up. There was no way I could agree to such a bargain. It would be irresponsible and stupid to say the least. It would cheapen everything that we have accomplished up until this point.

It was a cowards way out. No noble hero would ever agree to such a deal. It was like selling your soul to the devil. What good would it do to defeat the Archdemon and survive if Morrigan was to give birth to that same evil, and likely unleash it upon the world once again in few short years. Hell, the reborn Archdemon would probably be worse than the original. It would now have human form that it could hide in and years of tutelage under Morrigan that would allow it to blend in among humans. So naturally, I declined and Morrigan told me to bring Alistair to her room instead. She would try to get him to make the deal.

Seriously, I actually got angry at her for doing this. I really liked the idea of her softening up a bit by traveling with my character, and perhaps starting to appreciate normal human relationships. But she was determined to go through with it – despite anything that might have transpired between us in the past. And if no Gray Warden agreed to fuck her that night, she would simply leave.

Yes, my main offensive mage. The linchpin of most of my battle strategies. The one person I desperately needed for the encounter with the Archdemon would simply walk on us. Without her, we would die. Well, not die – but the final battle would be very hard and very annoying. She knew that full well, that bitch. She had me. I could either agree to her fucked up deal, or forget about ever even reaching the Archdemon and saving the world. She played me, and I could do nothing to stop her.

Reluctantly, I agreed. I felt dirty, betrayed and angry. Also guilty as hell. During the end game celebration I could not stop from thinking how fucked up this whole thing was. Everyone was congratulating me on my heroic deed, and thanked me for saving them. If they only knew what I did. I didn’t save them. I actually doomed them all. But there was nothing I could do. I had to smile, wave to the adoring crowds and play the role of the Hero of Ferelden for the time being. But I knew that sooner or later Morrigan would show up again. I only hoped I had enough strength left by then to fix my mistake and kill that unholy hellspawn we created if and when it became a threat. 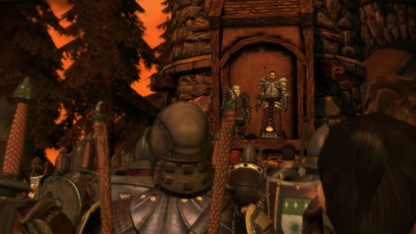 Alistair delivers an inspiring speach, while my character feels dirty for making the deal Morrigan.

Few games have caused such an emotional response in me. I guess this is a testament to the excellent writing that went into this title. Bioware deserves kudos for designing such a deliciously evil twist at the very end of the game. This whole exchange with Morrigan is what did it for me. That one instance turned Dragon Age it from a good game to a great game. Morrigan forcing me to do this creepy deal is probably going to be one of the more memorable moments in my gaming career. Seriously, I can’t remember when was the last time a game actually made me throw my hands up in the air and curse one of the characters out as if they were real and could hear me.

Of course, if I chose to play a mage character this scene would have much less impact. As a mage, you I would likely spec my character for offensive magic making Morrigan completely redundant. Having her leave before the final battle would not be game breaking. Hell, it probably wouldn’t even be that meaningful. I’d probably say “good riddance” and just continued with my plan of becoming a heroic martyr. But that’s not what I did, and I’m happy that the things unfolded the way they did. It made Morrigan insidious, manipulative and truly memorable character despite her many annoying qualities.

What did you choose during that scene? Did you refuse her offer? And if you did, how did it impact the end game content? Let me know in the comments.

This entry was posted in video games and tagged dragon age. Bookmark the permalink.