Few days ago I was trying to tell Ark what Dragon Age is all about. To help him to relate to the story I decided to compare it to something he knows very well – The Warhammer Fantasy universe. Whenever I ran into something that is beyond standard fantasy setting, I just reached to the Warhammer lore for something similar to compare it with. Surprisingly, a lot of ideas from the Dragon Age universe have direct one-to-one parallels in Warhammer.

Let me give you some examples to see what I mean

The Darkspawn are very much like the forces of chaos. Both are incredibly numerous hordes or twisted and evil monsters. They both carry a taint of some sort that can be spread. Darkspawn have it in their blood, while the Chaos warriors have their minds and bodies twisted by the evil gods they worship. Both forces cannot be reasoned with. Darkspawn are mostly mindless, while Chaos troops are religious zealots and fanatics whose gods manifest themselves in real world. Both are lead by demons of some sort.

Warhammer Fantasy setting doesn’t really go much into the nature of the warp, but it’s futuristic version Warhammer 40000 does. It defines Warp as parallel dimension which is basically built out of emotions of all living things – it’s the dimension of dreams. Inside the Warp emotions can coalesce themselves into sentient things – demons and deities in their own right. This is literally almost word-for-word description of the Dragon Age Fade. The only difference is that Mages in the latter can tap directly into this parallel dimension – that’s how they power their spells. In Warhammer Fantasy on the other hand, mages learn to control the winds of magic – waves of energy that flow from the north pole, where an ancient civilization had torn a hole between this world and the warp – the Chaos realm. So it’s basically the same thing but you access it directly.

In Dragon Age daemons are usually patterned after the 7 deadly sins: pride, sloth, lust, wrath and etc. This is similar to Warhammer Chaos gods who have similar areas of influence. For example, Slanesh is the god of lust, Khorne is the god of War and etc.. Nurgle (pestilence) and Tzeentch (lord of change) are a bit of departure here, but still. These Gods usually maintain vast armies of demons who serve them – and some of these demons can manifest themselves in material world to aid or lead Chaos armies. 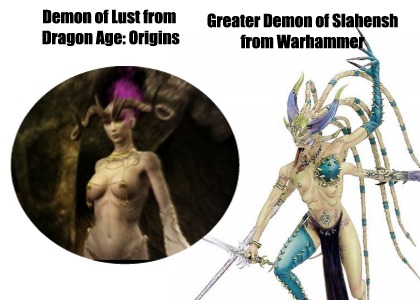 On the left: Demon of Lust from Dragon Age. On the right: Keeper of Secrets, a greater demon of Slanesh. Similar?

Both universes sport a popular religious cult that is generally specious of magic and supernatural. Chantry employs Templar knights who are trained to fight rogue mages. Warhammer has it’s own templars as well: the Holy Order of the Templars of Sigmar, though they are more commonly known as Witch Hunters. Both groups are primarily concerned with tracking down, and punishing magic users who stray from the righteous path and practice forbidden magic (blood magic, chaos magic, etc..).

The Circle == Colleges of Magic

In both games practicing magic is sanctioned or at least carefully watched by religious organizations. Value of magic however is to great to ban it outright. Therefore mages are urged to study their arts in a controlled environment. In Dragon Age they are forced to join Circles of Mages – which are usually watched over by full regiments of Templars. In Warhammer there are various colleges of magic which are not as strictly watched but still subordinate to the state and therefore to the will of the Grand Theogonist (ie. religious leader) who advises the Emperror.

Both settings feature nations roughly patterned after real world ones. Ferelden in Dragon Age is somewhat equivalent to the Empire in that it has a quasi british/germanic like medieval culture and architecture. Ferelden is led by a king, who appoints Arls to govern separate provinces. In time of need, a new king can be chosen by the assembled Arls during a Landsmeet. Empire is led by an Emperor, who appoints Elector Counts to govern individual provinces. In the time of need, Electors can choose a new king.

Ferelden shares a border with Orlais – a nation of people who speak with French like accents for some reason. It is a classic feudal state in which all the land is owned by the ruling monarch who then grants it to noble families in exchange for loyalty and support. All the power in the land is concentrated amongst the aristocracy who don’t usually care about the plight of the common men. The same can be said for Bretonia which borders Empire in Warhammer.

Orlais can be Contrasted with Antiva. While the former has almost no middle class, the other one has it in overabundance. Antivan cities are known for being dangerous, rough, but also full of opportunities to make it big. In this it is similar to Tilea, which is also roughly patterned after Renaissance Italy.

Oh, and there is also that whole thing about Dwarfs having an expansive underground road system called The Deep Roads and The Underway respectively.

I hope that I illustrated a point here: Dragon Age is suspiciously similar to Warhammer when you really look at them side by side. Is that bad? I don’t know. Perhaps not. Maybe this is precisely why I liked the game so much. I have been in a long term relationship with anything and everything Warhammer for years now. I started by playing the pen and paper RPG, and I also collected and played most of their miniature games (Warhammer Fantasy, Warhammer 40000, Necromunda, Mordheim, etc…) and video games their licensed. I’m posting all of these things here not to accuse Dragon Age of ripping off older, more mature setting. That’s not my intention at all. The game is original to the extent any fantasy can claim to be original. I found its setting to be colorful, complex and sufficiently different from Warhammer not to be bothered by it. The fact that they may have borrowed some of the working thematic elements from Games Workshop may have only made it better.

How about you? Have you noticed these similarities before I told you about them? Do you think the game is a ripoff? Let me know in the comments.

This entry was posted in video games and tagged dragon age, warhammer. Bookmark the permalink.