Posted on March 23, 2010 by Luke Maciak   tein.co/5237
Word of Warning: this post may contain some minor spoilers for Mass Effect 2 side quests. I won’t mention anything regarding the main quest or the end game here because… Well, I don’t consider it to be the “a good part”.

In my last post I ranted about the nonsense that was Mass Effect 2 main storyline. And yet, I really enjoyed this game. I enjoyed it so much that I finished it twice – once with male paragon and once with with female renegade. Would I put so much time into playing a game I hated? I wouldn’t. Mass Effect 2 is a good game – and the best parts of it are the side quests during which you recruit your crew, and/or help them resolve their personal problems. That’s where the writing shines, and the your company members really come to life.

ME2 does a really good job taking you to places you heard about in the first game but couldn’t visit. For example, you learn a lot about the the Krogan home world throughout both games. But ME2 actually lets you visit it. You get to see first hand the type harsh conditions that shape Krogan warriors. Tuchanka is basically the Salusa Secundus of the Mass Effect universe. If you ever read Frank Herbert’s Dune novels, you would know that Salusa Secudus was a harsh, unforgiving penal colony that forced it’s inhabitants to hone their combat and survival above anything else skills in order to stay alive. The dreaded imperial Sardukar units were recruited from that very planet and their efficiency in combat could only be matched by the Fremen of Dune who grew up in similarly harsh environment. You get a glimpse of Krogan society, culture and rituals. I thought that participating in the traditional right of passage was a great touch. 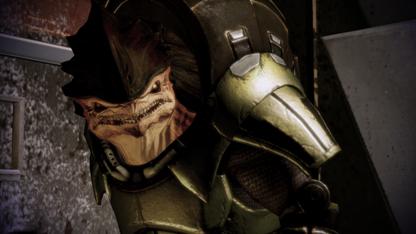 I was similarly excited to see the Quarian Migrant Fleet. Tali is one of my favorite characters so I was stoked to see the place where she grew up. I was a bit surprised to find out that Quarians wear their environment gear even on their ships. I always assumed that they simply keep their vessels are clean enough to be able to walk freely inside. But I guess this makes sense in a way. It’s easier to handle trade goods and grow food this way I guess. I was a bit disappointed that I couldn’t see how Quarians looked underneath all that gear – that’s all.

I really got a kick out of talking to Admiral Xen voiced by Claudia Black – who was also the voice of Morrigan in Dragon Age Origins. Of course in my heart, Claudia will always and forever be Aeryn Sun from Farscape. I love the fact she keeps showing up in BioWare games. If you skipped that dialog, make sure you talk to her the next time you play that mission.

My favorite mission however must have been the Legion loyalty quest, during which you actually get to visit a Geth controlled space station which turns out to be just a huge server farm. I really liked the fact the base seemed to be deserted, save for some maintenance and sentry platforms wandering about. It really revealed a lot about Geth and their way of life. It also put an interesting spin on the Quarian quest. 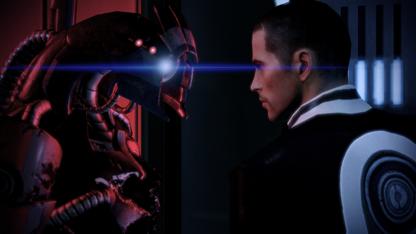 Legion - most interesting character in the whole game.

At the end of Tali’s trial you can state your op opinion about the war to reclaim the Quarian home world either by endorsing the idea, speaking out against it or ignoring it altogether. I initially chose to ignore it. Who was I to meddle in the affairs of the Quarian people. However after doing Legion’s quest, I wished I could have went back and urge the Quarian Admirals not to wage war against Geth.

In fact, to me finding and recruiting Legion was a much more rewarding, mind blowing, surprising and awesome plot twist than the lame reveal that Collectors descended from Protheans. I really did not expect ME2 to tell us so much about the Geth, their culture and way of thinking. They were great faceless foes to throw against us, and being able to talk to one of them, and ask it all kinds of questions was probably the best part of the game for me.

I love the fact that so many NPC’s from the first game return in the sequel. And I’m not speaking about the original Normandy crew. I’m talking about random ass NPC’s that I saved or helped in the past, coming out of the woodwork. I met the inspector from the Noveria mission, the Thorian controlled Asari commando, that stupid scientist who was helping to make a Krogan army for Sarren. It is a really nice touch. Meeting people you saved or spared gives the game continuity. It almost makes up for the messy retcons at the beginning of the game. Almost.

The most interesting of these NPC’s was the emissary of the Rachni queen I liberated in ME1. It seems that the Rachni are rebuilding their society and so far have not decided to conquer the universe. In fact, they seem to be quite determined to live peacefully with other races, and one day join the intergalactic society – once they are sufficiently strong and established to discourage a knee-jerk reaction campaigns against them that could be launched by the citadel. Neat! I sometimes wondered if the paragon option of freeing the queen was the right thing to do. This random encounter didn’t erase all my doubts, but it was reassuring.

I liked visiting the former crew mates – especially Wrex who really seem to have found his place. I was bit baffled by Liara’s new job as the information broker though. The shy, introverted scientist is now a super spy? I didn’t really buy it, but whatever.

I get by with a little help from my friends…

I talked about most of the female characters in the romance post so I’m not going to repeat myself here. I liked Jack and I was always fond of Tali. That said, my favorite character out of the whole game (other than Legion) must be Mordin. I loved visiting him early on in the game because he always had something interesting to say. It was very interesting to talk to one of the original creators of the genophage. The Salarian scientist regrets unleashing it upon the Krogan, but believes that it was the only way to actually save their species from being wiped out like Rachni. In fact, Mordin is one of the few people in ME universe who feels that extermination of that race was a mistake. I think he would really appreciate the fact that I spared the queen in ME1 but unfortunately there was no dialog option to tell him that. 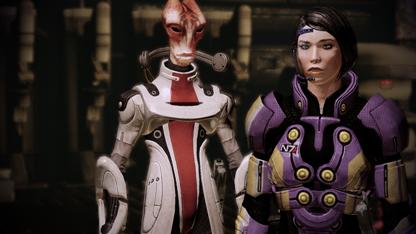 Mordin and my female Sheppard.

BioWare was able to write him as a scientist and an intellectual without actually falling into the stereotypical awkward science dork archetype you usually see in movies and video games. You know what I’m talking about right? Most smart people you see on the screen in interactive and non-interactive media is the same twitchy, cowardly chronically awkward, stuttering dweeb with taped up glasses, greasy hair and annoying habit of mumbling incomprehensible techno-babble to himself as he delivers exposition to bored characters who always have to cut off his explanations and tell him to get to the point. Mordin is different. He is strong, confident and a bit eccentric – he has a personality. Take his manner of speech for example. You could write it off as just being hyper but if you listed closely to how he says things you will realize this is not the case. Mordin avoids flowery language and uses short, succinct and precise sentences. Each conveys a single idea or notion in as few words as possible and in a direct manner that is difficult to misinterpret. I imagine the way he speaks is the way he writes notes for his experiments. It is the type of succinct, to the point, scientific shorthand you would expect to see on lab reports or in peer reviewed articles.

But he is not just a one-track-mind scientist. Mordin is a true Renaissance man. He does science, he can handle himself in a firefight, he is a patron of the arts and he sings. If you haven’t seen Mordin break into song yet, you just haven’t talked to him enough. That scene was priceless – especially Sheppard’s reaction to the sudden musical number (or complete lack of thereof).

I wish there were more characters like him out there. No one ever seems to know how to write good scientist characters. Most of the time the writer tend to fall into one of the extreme cases: you either get a total dork or a tough, muscular, dumb looking action hero in a lab coat. There is almost no middle ground. And yet Mording seems just right. BioWare nailed it. 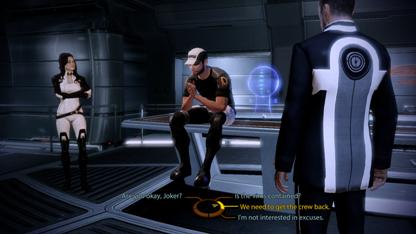 Joker after the abduction scene.

I also always liked Joker – and not just because he is voiced by Seth Green – though that’s probably a part of it. ME2 really gave him a chance to shine. I absolutely loved the abduction sequence where you briefly get to play him instead of Sheppard in order to save the ship. It was a very well done sequence. It’s even better that Joker now gets a sidekick that he could interact with in the cockpit. I loved how his relationship with EDI starts with outright hostility on both sides, but at the end of the game they are are pretty much like a married couple. I cracked up the first time I heard EDI call Joker by his first name. Hell, I didn’t even know his first name!

While the story is a bit lame, it’s the little things like I described above are what make this game so enjoyable. It’s the characters, their relationships an the Mass Effect universe itself. Oh, and the combat is somewhat fun too. I enjoyed the cover based tactics of ME2 much more than the more conventional shooter mechanics of ME1. But that’s purely subjective and some people feel the other way.

So even if you are put off by the silliness of the main story, various nerfs and retcons I’d recommend sticking with the game till the end. You will miss out on all the awesome side quests and Mass Effect lore otherwise.

This entry was posted in video games and tagged mass effect 2. Bookmark the permalink.