In which I hate Borderlands

Yes, yes – I know what you are going to say. This game is much more fun when you play with your friends. Fuck that! I am an antisocial introvert and when I play my video games I want to be alone. I have to deal with people and their bullshit all day long at work. When I come back home and sit at the computer, I don’t want to be social. If I wanted to be social I would call some friends and go out or something. Sometimes I need my alone time though.

Also, I asked Ark if he wanted to play it and he told me to shove it. Actually, at first he was ok with it, but then he found out it was pretty much a MMO and decided he wants nothing to do with it. He still makes fun of me for playing WoW for like a month, before I got so bored doing repetitive quests that I wanted to puke.

This is sort of the point though. I played the “ultimate” MMO out there (at least with respect to the user base and the amount of money it makes). It was fun for a little while, and then it got tedious and boring. And the only reason why it was interesting at first was because of the setting. Well that and the fact that I was experiencing first hand all the stuff people have been referencing on the inter webs. WoW is unique in that playing it is a prerequisite for understanding a large fraction of jokes and memes out there. Sadly, once you have played one MMO, you essentially played all of them.

Let me put it like this – the whole MMO experience boils down to this:

This is pretty much Borderlands in a nutshell. All characters you meet are essentially vending machines that dispense quest cards. You don’t actually get to talk to them. You just walk up, push a button and get a dialog screen from which you can shop for quests or turn them in. They are immortal and immobile and about as much fun to interact with as furniture. When you first meet them you get a cute cut scene which their name appears on the screen with some funky side effect. It’s like “Boom! Introducing: Quest dispenser #4”. 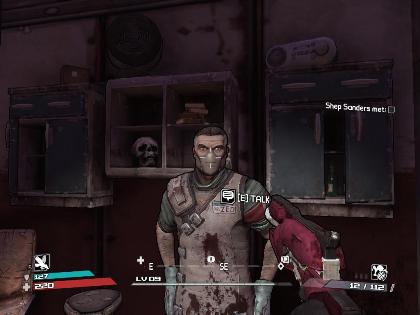 Hi, I am a quest dispensing vending machine. Push on my belly to receive bacon... I mean quest.

Of course most MMO’s try to mix the quest dispenser boxes with static non-quest dispensing characters. So when you go to a “town” there are some people there just hanging around, pretending like they live there. Borderlands doesn’t even bother doing that. Towns in the game are completely deserted, containing maybe one or two quest giving NPC’s. It sort of gives you an impression that this whole damn planet is populated by respawning bandits and mole rats (or whatever the dog things are called in this game).

I swear, every time I left the starting town, I would get attacked by this idiot and his friends: 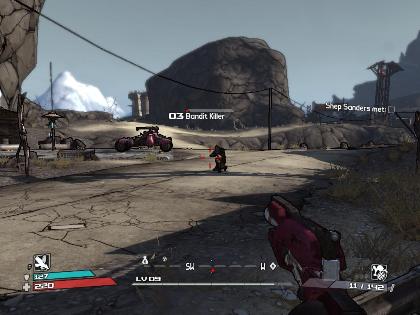 Hi, I just spawned around the corner. You want some XP for shooting me? 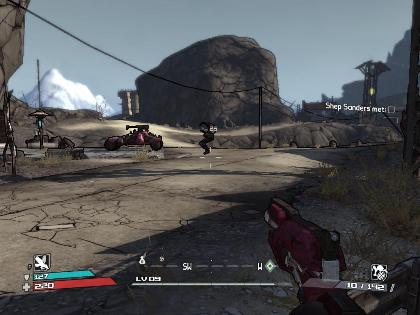 Thanks! See you again in 5 minutes.

This would happen every 15 minutes or so. Every time I got back to the town to turn in a quest he was there to greet me with his bullets. Every time I left to get my car and drive to the next boring quest location, he would make sure I get some points for driving over him. In fact, I sort of felt bad for him. I would try to avoid the repetitive firefights most of the time, but he would spawn as soon as I was outside of the town gates. It can’t be easy to die every 15 minutes or so, can it?

Speaking of cars, I made my ride to be raging pink for no reason whatsoever: 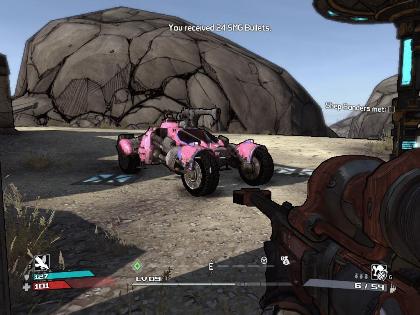 This is how bored I was in this game!

This was to go with my raging pink costume of course. This just goes to show how bored I was with this fucking game. If you know me, you know I’m all about the stetting, and the story. I actually get into these games, and role play my characters. I don’t usually make them look ridiculous on purpose. But since Borderlands has neither setting nor a story I could follow, I was getting restless. Hence, overabundance of pink.

The playable area is huge, but you can’t just drive around and explore it because it is neatly partitioned into level appropriate content. You are supposed to stay in certain zone until you run out of quests, at which point you ought to be the right level to move to the next questing area. If you ignore your quests and go exploring you will encounter one of the following:

As far as I could tell, the enemies didn’t change much with level. I was able to get myself into areas where the bad guys were about 15-20 levels above me and they were still the same bandit and mole rat models. Then I went to some high level instanced area, only to find more rats and bandits. The game is not very big on variety. The terrain is pretty much the same generic “Mad-Max fucks around in the Thunderdome” inspired desert wasteland, complete with weird cars and crappy, ramshackle buildings. It’s not even an expansive, open ended world as you would expect from this type of game. The terrain is closed off, claustrophobic labyrinth made out of cliff walls. All the towns and quest areas are neatly fenced off and protected with knee high barriers that will prevent you from driving your car inside.

Of course every once in a while you will see some expansive open ended terrain in a distance. I almost got excited once thinking that this is how high-level areas look like. I assumed that the labyrinthine canyon ville I was stuck in was just an extended tutorial area and once I hit certain level I could go out into the open desert. Then I realized that this was an “off map” area and any attempt to approach it would trigger the insta-kill turrets: 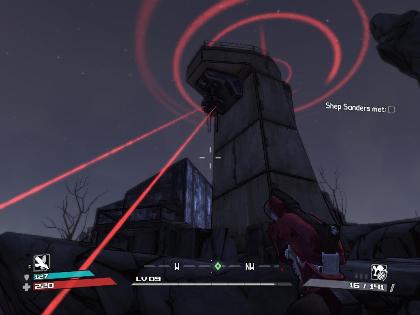 The turrets are kinda neat variation on the border patrol theme. I actually spent a good deal of time trying to cheat these damn things by hiding behind rocks and other terrain elements. Unfortunately these things don’t actually need to shoot you. If you venture far enough you will just die instantly even if none of these things has a clear line of sight to you. Sigh… Yes, trying to outwit the turrets was more interesting than the game itself.

Now don’t get me wrong – the game is actually quite pretty. Take this screen shot for example: 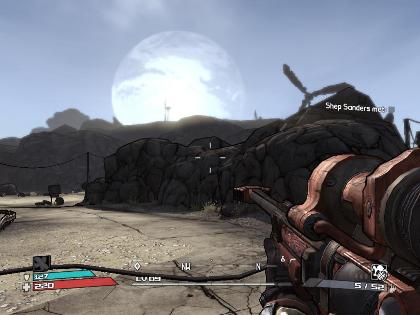 The unique visual style is definitely a strong suite of this game. It is a neat combination of 3d models and comic book/cartoon style. It very much reminded me of XIII which used a similar approach. But that was 7 years ago so no one will probably remember that game.

The whole running around and shooting things bit is also fun. It gives you about the standard regulated dose of FPS joy, augmented by the fact you get to level up and collect weapons. It’s almost like an RPG. Almost. You know what ruins it though? Claptrap.

Motherfucking Claptrap is officially the worst part of this game. If you haven’t experienced that piece of shit robot yet, imagine taking the worst qualities of Jar Jar, Scrappy Doo and the Adoring Fan from Oblivion and rolling them all up onto an annoying robot character. I fucking hate claptrap! This game would be so much better if you could actually kill it. Alas, you cannot:

What makes this guy worse is the fact that he is not just one solitary character. Claptraps are everywhere. Every town, every menu screen. Hell, he even shows up on the main menu. They are really pushing this character down your throat and it is just not working.

To say I was disappointed with this game would be an understatement. Borderlands is just as dull and boring as any MMO out there – you know, just without the “massive” part. Doubly so because the game setting is rather bland and uninteresting and contains way to much of Claptrap. Then again, if you generally like the sad-boxy, aimless MMO game-play you can enjoy it. Especially if you an play it with some friends. It is not for me.

Oh, and before you say anything – no I am not going to try playing it online with some random ass people. If I wanted to play a co-op game with random strangers I would just launch L4D2 which is actually much, much less boring and does not contain claptrap.


11 Responses to In which I hate Borderlands