Unlike most people who bought Mirror’s Edge when it was first released, I knew it was not going to be spectacular. Still, I decided to try it out because jumping around rooftops Parkour style it looked vaguely fun to me. Sadly the game has as much to do with actual Parkour as Super Mario has to do with plumbing. If you watch the pro’s do their rooftop running shtick on Youtube you will notice one thing: they never stop. The whole fucking thing is one fluid motion. They just bounce off the available terrain features and keep going, using anything and everything to their advantage. The videos have this uninhibited free flow feel to them. I’m sure a lot of them are rehearsed and practiced beforehand but I sort of feel that a Parkour game should be all about the crazy ass running, vaulting, jumping, rolling and etc… 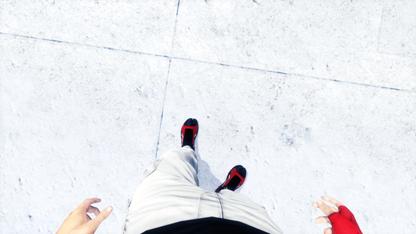 People always ask how can they make precision jumps in a FPS without being able to see their feet. In ME you can see your feet. It does not help though.

Mirror’s Edge certainly has the moves but lacks the feel of these videos. Each level is essentially a maze with only one possible path through it. In most cases the game maps it out for you by coloring certain terrain features red to indicate you should jump or grab on to them. Sometimes it doesn’t though, and that’s usually where you make a bad jump and die. The whole experience can be summarized like this:

That is pretty much the whole game. If you press the jump button a second to early, you die. If you press it to late, you die. If you are at a wrong angle when you jump, you die. And sometimes you die because it is not completely clear as to what you should do. For example, sometimes a ledge seems to be close enough to just jump towards it. But if the designers wanted you to wall run to that edge, they will place it just inches out of reach instead. On the other hand if you wall run instead of just jumping, it is easy to overshoot the platform and fall. Other times you die because you are on some ledge and it is not entirely clear where you should jump next. There might be rooftops and platform all around you but only one of them can be accessed – and it is usually the one directly above your head (and as Valve designers found out, players hardly ever look up). 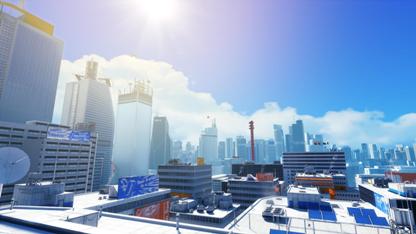 Visually the cityscape in this game is stunning even if a little sterile.

So the whole free-flow of Parkour is gone – unless you have already memorized the whole level and can do all the jumps with your eyes closed. The game about crazy, frantic acrobatic rooftop running actively discourages you from doing anything crazy or unplanned. After each jump you are expected to stop to make sure you are aligned just right for the next jump. If you try to wing it, you will be punished. The terrain is your #1 enemy in this game – which is ass backwards to me. You are this limber, ultra-athletic chick who is chased by corporate cops in full body armor. Terrain should be your best ally and your main advantage. And yet you usually need to take out all the enemies in the area before you even consider making some of the difficult jumps, because if you don’t they will shoot you down in mid air. And even if they don’t their bullets will nudge you millimeters off course and make your jump fail.

Even tiny tweaks to the game play would make a huge improvement – for example making your character a bit more aware of the surroundings. Make her automatically stop at an edge of the roof to prevent accidental fall. Make her automatically grab the ledge when the player accidentally walked off the platform while trying to set up a jump. Detect that the player is missing a jump by a half an inch, and just make it happen. Strategically place flag poles and platforms the character could auto-grab after missing a big jump that was shown to be tricky in the testing phase. Furthermore designing several paths through the level instead of a single one would go a long way. As it is right now the game is almost painfully linear. 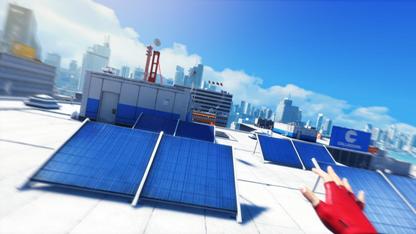 The fact you can see your hands and feet as you run. Sometimes I get tired of playing the disembodied hand with gun.

In my mind, the game should encourage the player to do spectacular jumps and make them easy and relatively risk free – focusing on making the guards and the police the main threat. The game should be full of “Holly shit, I can’t believe I just did this!” moments rather than a series of timed jumps.

The combat is an awful mess as well. First off, you are told you should try to run away from cops whenever possible – and surely enough your first encounters with law enforcement pit you against immortal swat teams with machine guns. Shortly after that however you find yourself in a position when you have to take out a whole squad before you are able to movie on. That is also the point at which you realize that the following actions have the exact same effect on your enemy:

Each of these attacks will make your opponent stagger, and take a step back – giving you just enough time to recover from your attack, but not enough to gain any advantage. However there is another way. If you get in your opponent’s face, they will stop shooting (for some odd reason) and try to pistol-whip you or hit you with the butt of their rifle. As they do that, their weapon will flash red for a fraction of a second. If you manage to press the right mouse button while it’s red, you will perform an instant disarm-and-auto-kill move. In other words, combat is basically a quick-time event. 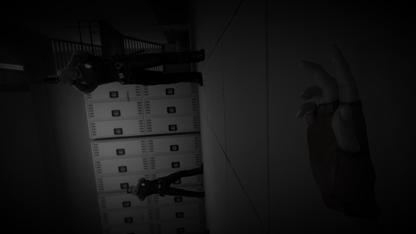 You will be seeing a lot of this in your game. Every time you miss a disarm move actually.

You would think that a Parkour styled game would let you knock your opponents down just by running into them, or do crazy stunts like sliding in between their legs, using their chests and shoulders as springboards and etc. They should be ridiculously hard to kill, but easy to throw, push down (applying leverage or using your velocity) or outmaneuver by a small and agile runner. Combat should be about temporarily buying yourself time and increasing distance between you and your pursuers – not about taking down fully armed swat teams in riot gear with your bare hands. But alas, that’s precisely what this game is about. 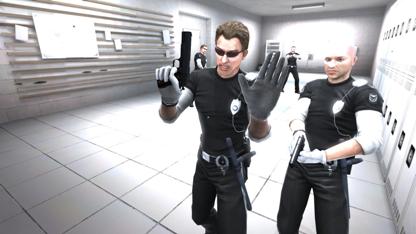 These guys can't be killed. You know because they don't glow red.

Granted, the running and jumping part can be fun – especially when you really hit an extended stretch of the game where you don’t die. My favorite parts were those rare spots in the game where you had a bit of open terrain to cover and a wide margin for errors, and clear goal in sight. So you could really pick up speed, and just enjoy the acrobatics without stopping every minute and playing “spot the next red thing”.

Mirrors’ Edge has a crappy game play, but it the story is even worse. But I’ll leave that discussion for another time.

This entry was posted in video games and tagged mirror's edge, review. Bookmark the permalink.