Who here cares about video game achievements? You know, stuff like Steam Achievements, or their X-box/Games for Windows Live based equivalent. Personally I don’t really pay them that much attention. I’m not the kind of person who likes to brag about my video game exploits, so having them listed on some public leader board doesn’t really excite me. In fact, I tend to avoid a lot of achievement generating in-game activities such as collecting X items of the type Y, discovering all locations and etc… The point is that a bit of congratulatory text popping up within the game, and on my online profile is not really a big incentive to me. If I get it, great. If I don’t, meh…

There is one exception though: achievements that have some sort of in-game effect. The perfect example here are the bobble heads from Fallout 3: 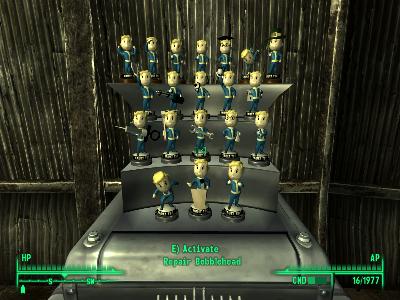 As you can see above, I collected all of them. In fact, I cared about them so much, that I printed out the wiki article that listed their locations just to make sure that I didn’t miss any one. Why? Because they had a tangible in game effect. They would permanently boost one of your attributes or skills. Granted, the boost they gave you was very minor but I still didn’t want to miss out on it. Not only that, but your bobble head collection could be permanently displayed in your house (in Megaton or Tenpenny Towers) which was a very nice touch. I suspect I would probably collect all of them even if they didn’t offer the stats boost just to fill the display case. Kinda like I sort-of collect garden gnome figurines and put them all over my in-game house.

So yeah, I eschew the social aspect of the achievements (you can display them to friends) as silly but then I spend hours finding stuff to decorate my virtual house in a single player game. A house that no one else will ever actually see, unless I post a screenshot of it online or something. That’s what amuses me though, and I think sandbox RPG’s such as Oblivion and Fallout 3 should have more this type of stuff. Are you listening Bethesda? Give us more collectible crap!

A lot of games already have achievements for collecting large number of certain items, but he idea is to give these collections some-in game effect. And barring that create some sort of easy way to display the collection in the in-game house/hideout without dragging items and fighting with the physics engine. Here are some ideas:

I’m pretty sure you guys can come up with some other ideas for this. What sort of collectible items/scavenger quests would you like to see in sandbox games. How would you like these to be represented in the game world. Virtual displays? Stat boosts? Both?

Also, do you usually hunt for the traditional X-box style achievements, or are you like me – more motivated by something that has an impact on the actual game – like a visible display case, a special perk or stat boost?

This entry was posted in video games and tagged fallout 3, morrowind, oblivion. Bookmark the permalink.


14 Responses to Achievements vs In-Game Perks