Guys, remember how Morrowind and Oblivion had training dummies literally everywhere? You know these wooden things that existed solely to have NPC’s wailing on them every once in a while? Or the little targets for bow practice? Hell, even Fallout 3 had few places where you could shoot at cans or bottles lined up against the wall. I was always annoyed they were merely props and scenery elements. Why couldn’t they be used for actual training?

I mean, think about tit. You are walking around and you see a dude shooting arrows at an archery target, or whacking a wooden dummy with a sword. What do you do? You go and take a whack at it yourself. Tell me you have never done this. Tell me you never fired a few arrows at one of those target things. Tell me you never swung a weapon at a training dummy or never unloaded a few rounds into a neat stack of cans/bottles in Fallout. Unfortunately it does nothing to increase your skills. 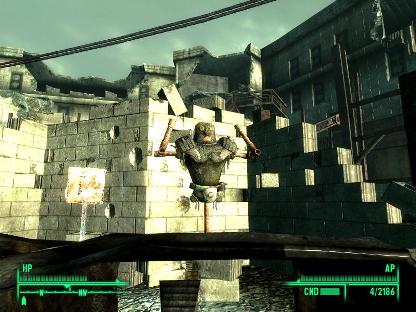 Even Fallout 3 has these things.

I was always annoyed at this. Why can’t you train using the training dummies? I mean, this is what they were meant for, no? That’s what NPC’s supposedly use them for. So why not allow the player character do the same? Why not count hits scored against the dummy as “real hits”.

I know, I know – this is probably a game balancing thing. If you could train your weapon on a dummy a lot of people would just stand there for hours and do nothing else. I mean, there are dozens of tutorials and videos out there that show you how to outwit Bethesda leveling algorithms by sneak-walking into the wall in just the right spot, or abusing the master trainers. But it wouldn’t need to be like this. You could put a limit on how much training could be done for a dummy. I can see two caps that could be relatively easily implemented even via mod of some sort:

Thus a low level character can really get a training boost out of using the dummies, and perhaps gain a few levels quicker than expected. But eventually the dummy training will become useless at a later stage of the game.

Oh, and apparently there is an Oblivion mod for that. I would test it but I don’t have Oblivion installed at the moment. I don’t believe this mod has any training caps like the ones I described above, making it less than balanced. Hmm… Maybe I should install Oblivion and try to figure out how to use that game editor one day.

This entry was posted in video games and tagged fallout 3, morrowind, oblivion. Bookmark the permalink.