I just wanted to share an observation with you. Maybe you have experienced this too. Let me know. Recently I came to a conclusion that a lot of people are really into team sports. And I don’t mean that they actually participate in them – they just obsess over them. I have nothing against watching sports on TV or rooting for your team. But apparently some people treat these things like serious business.

They bicker and argue about the sports teams as if they were text editors or something. And no I’m not kidding here. I know that most of the readers here are going to say “You are full of shit Luke, there is no way anyone could get that worked up about sports” but they do. For no reason whatsoever too. 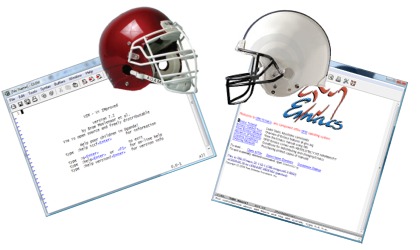 I mean, the editor debate has merits. It is about the most efficient and productive way of editing text files – which is what we programmers do for a living. Picking the right work tool is incredibly important. Sports on the other hand – well, that’s just entertainment. And yet people get really worked up about them.

For example, being seen wearing a shirt with the logo of the wrong team is reputation destroying, friendship ending sin and anyone committing it deserves fate worse death. Kinda like being caught using the wrong text editor.

I figured I might as well post this here, so that we can all benefit from this. Next time you see people behaving irrationally when sports are involved, think back to text editor debates. It is a bit like that.