Happy Evoloterra folks! Today is a very special holiday that no one knows or cares about – the anniversary of the first moon landing. It was the first time in the history of mankind when an Earthling left his home planet and walked on a different world. Granted, that world was just our moon, but still – it was a hell of an accomplishment. Hell, I say it: it was the greatest accomplishment in the history of man. 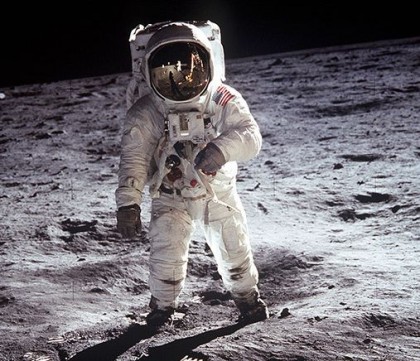 This happened before I was born. And never within my lifetime.

Too bad we stopped doing this. I swear, this saddens me more than anything. Before I was born people were flying to that big rock in the sky on a semi-regular schedule. People were talking about lunar bases, manned trip to Mars and beyond. And then it got old. Astronauts stopped being treated as rock stars, media got tired of covering launches and landings or airing space-chatter. Budgets got cut and someone somewhere decided that sending people to the moon (cause fuck Mars, that’s too far away, no?) was not cost efficient or profitable enough. And so we stopped going.

One day when I have kids they will likely ask me why we have stopped going to the moon. What the hell am I going to tell them? I mean, I will have to somehow explain to them that the whole moon landing thing was just a pissing contest. We had to do it to prove that our capitalist dicks are collectively bigger than the communist dicks. We had to go to the moon because Russians wanted to do it before us. But we won and that was that. End of story.

Now we only fly into space to fix satellites and dick around in the space station doing some research stuff that better turn out to be super profitable cause if it doesn’t we are gonna drop that station into the ocean and never build another one.

When I was a kid, I thought that we will establish moon colonies within a lifetime. I thought that I will actually see a man set foot on Mars. It made sense – explore, expand, terraform, colonize. We were going to branch out and live on different worlds. Now I know this is not going to happen within my lifetime. Hell, it may never happen. Current trends indicate that our species collectively turned its eyes inward and away from the sky. We no longer yearn to be space explorers. If we wait until our sun is about to blow up to start thinking seriously about extra terrestrial colonization it will be a little bit to late. Besides, one large asteroid is all it would take to end our civilization right now. If we don’t reach out to the stars, we are doomed as a species.

But hey, not all is lost. Even though we sort of gave up on the whole space flight thing, doesn’t mean no one else is working on it. Other nations have space programs and the private sector is slowly getting involved. I guess someone just needs to figure out how to make money out of this and then the rest will just happen spontaneously.

I hate to think that extra terrestrial landings will be remembered only as that quaint and silly thing that people did in 60’s and 70’s.