I must admit that the main reason why I have picked up the 2008 Prince of Persia game was this video:

It really does paint the game in a good light and I fully subscribe to everything that Shamus said in that video abut game design. Well, except one thing – I don’t think that Prince of Persia is very innovative at all. I honestly don’t think that the whole “you can’t die” concept is in any way new or ground breaking. Let me put it this way – the PoP death mechanic is about as innovative as adding the Copy + Paste function to the iPhone. If you remove a feature from your product and then add it back in a later version you can’t really claim to be doing any kind of innovation, can you?

In the 2008 PoP game missing a jump, whisks you back to the last platform you were standing on. The game remembers where you were standing before you jump, and puts you back there if you fail to reach another platform. Does this remind you of any existing game mechanic? To me, this is nothing else but a quick-save/quick-load function build right into the core game play. The only innovation here is that you no longer have to constantly mush the save button but the end result is exactly the same – you get to gracefully recover from your failure without being punished by having to repeat most of the level. It is an elegant solution to a problem that has been plaguing platformers for years now: lack of the “save anywhere” feature. 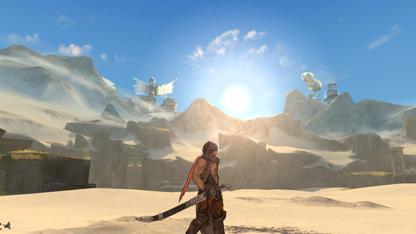 It seems that a certain breed of game designers hates the idea of allowing the player to save anywhere and at any time. They think that having a quick-save button will somehow cheapen the gameplay experience by taking the sting out of failure. This could not be further from the truth. Allowing the player to gracefully recover from failure and pick up right where he left off maximizes the enjoyment for the precise reason Shamus mentioned in his video. If you punish the player and force him to go through some grueling repetitive routine every time he makes a mistake he will eventually lose interest – unless he is a particularly stubborn or challenge driven individual.

It is actually quite funny that the anti-save-anywhere Ubisoft developers came up with a concept that amounts to a quick-save mechanic without actually realizing what they were doing. They started flirting with the concept of graceful failure recovery in Sands of Time and they simply took it to the logical conclusion in the 2008 game by creating a convenient version of what all platformer makers hate the most. And it works!

I really like this mechanic and I wish more save-haters would use it but it seems that the whole idea is already dead and buried. Most of the people I talked to consider the game to be a failure. It is unfortunate but I must concur with them. It is not a very good game – especially when compared with Sands of Time. But the suck-factor of this game has nothing to do with the death, or lack of thereof. That part of the game actually works flawlessly – it is everything else. 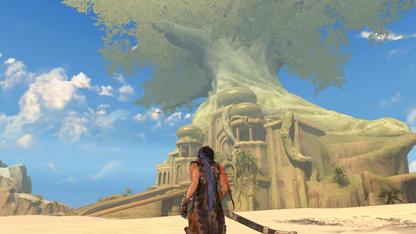 The initial areas of the game are very nice. Things get much more dull as the game progresses though.

First off, the game feels almost painfully linear despite the fact it is a sandbox game. The previous PoP installments felt incredibly open ended thanks to the seamless parkour environment they offered. You could run up every wall, climb every column and swing on every hanging feature if you wanted to. While there was usually only one way to get from platform A to platform B, finding it was half the fun. Discovering the exact sequence of jumps, wall runs and acrobatics was incredibly rewarding. The 2008 game removes this joy of experimentation by putting visual cues on all the obstacles in the form of scratches that let you know where you need to wall-run, and at which point you should jump off. So the trial and error platforming boils down to an exercise in following the scratch on the wall.

Combat was a big part of Sands of Time and its emo sequels. It was amazingly well done, and seamlessly integrated into the running, jumping and platforming parts of the game. It was crazy mix of button mashing, whirling blades and parkour acrobatics and it was awesome. The prince could run up the wall, somersault off of it and deliver a massively powerful attack to the enemy below him on his way down. For some reason the 2008 title decided to “fix” the part of the game that was absolutely flawless and incredibly fun. Instead of crazy parkour combat, they decided to go back to the roots and implement the original 2D Prince of Persia fencing game play in 3D. Now the prince can’t even draw his sword when he is not in combat. When he does however, his feet become glued to the surface and he immediately loses his acrobatic agility. He has the exact same move-set as the original “white jumpsuit” prince had back in 1989: shuffle forward, shuffle back, block and attack. The combat basically boils down to holding the block button when the enemy is wailing at you, and mashing one of the 3 available attach buttons when he is not. Oh, and at least once per fight there is a quick-time event that either lets you deal more damage or become wounded yourself. The whole thing feels sluggish and incredibly boring – which is probably why the game seems to keep the number of enemies you encounter in each area down to a minimum. In fact, most of the begging levels have exactly one enemy – the end level boss.

So let me paint you a picture here: you start in an open ended area and you pick a door (or archway or whatever). You enter it, and then follow the scratch on the wall until you find the boss. You defeat the boss using the dullest and most mind-numbing combat mechanic I have seen in a Prince of Persia game so far, then you go back the the open ended area and start the whole thing all over again. After 4 levels of this I was sick and tired of the whole thing. 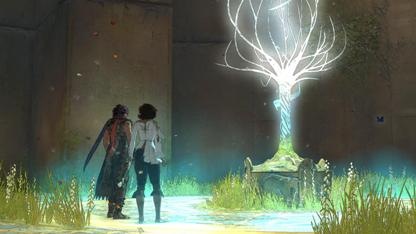 Honestly, I still have no clue what happened in this scene.

Perhaps if the story was good I would be drawn into the game despite the repetitive and dull combat. Sands of Time didn’t really have that many cut scenes but the narrative was very strong. You knew who the Prince was, you knew his motivation, and you knew the motivations of the other characters. I put several hours into the new PoP and I still have no clue what the hell was going on or who the characters were. The protagonist seems to be just some random dude who lost his donkey. No, I’m serious – that’s how the game starts. You lost your donkey and so you are wondering through some canyon looking for it, and you bump into some random girl chased by bunch of armed guards. So you kill the guards, and follow her to some strange temple, then her dad shows up and starts freaking out. All of a sudden someone releases some ancient evil that was sealed underneath the temple and now it is your job to fix everything. Why was she chased? Why was her dad’s problem? Why the hell did we go to that temple in the first place? Hell if I know. Maybe I wasn’t paying enough attention but it every time I had a chance to talk to the girl and pump her for information I just got random dialog about the color of my scarf or about how she is the spoiled brat and the prince is the rugged man of the desert. Sigh…

Unfortunately a single great idea (implementing quick-saves as super-frequent checkpoints) can’t save a game which failed to deliver on every other front. The super-linear platforming, horrible combat and poor storytelling in the initial stages of the game were more than enough to make me stop playing. Perhaps the story picks up later on, but I just didn’t feel like getting there was worth the effort.