Scott Pilgrim vs The World

I finally got to see Scott Pilgrim vs The World and I absolutely loved it. It didn’t do that well at the box office, and there is a lot folks who dismiss it with a shrug but it is undeniably an epic movie. And when I say epic, I don’t actually mean the literal sense of the world. It is not an epic, like the Lord of the Rings is. It is epic in the “most internet sense” of the word. 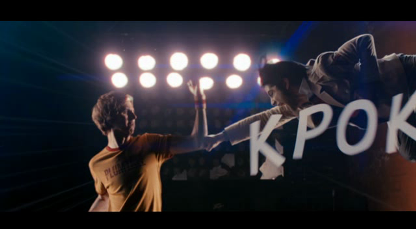 Let me put it this way: you most likely need to be in a certain demographic to actually “get” Scott Pilgrim. You had to be born at some point in the 80’s or maybe early 90’s and grow immersed in a world of video games, comic books, anime and obscure music bands that ceased to be cool as soon as more than 3 of your friends knew about them. Why? Because the visual vocabulary and internal logic of this movie are built on top of these factors. It only makes sense if you accept it’s logic, and accept the fact that it’s characters inhabit this unreal, comic-book and video-game powered incarnation of our universe. Granted, you might still enjoy the film if you do not fall in that specific demographic but it might seem a tad silly, incomprehensible and random at times. 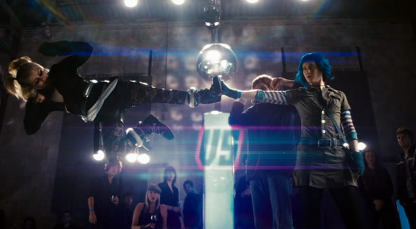 I can honestly say I enjoyed every second of it, from the moment the Universal Logo music got replaced with an 8 bit chip tune, to the animated 2d sprite of Scott Pilgrim punching away at the “THE END” sign after the end credits. It clearly resonated with me the way few movies do. I can’t remember the last time I had so much fun watching a motion picture. Actually, scratch that. I remembered. Last time was when I watched Kick-Ass. I loved both of these films but for very different reasons. 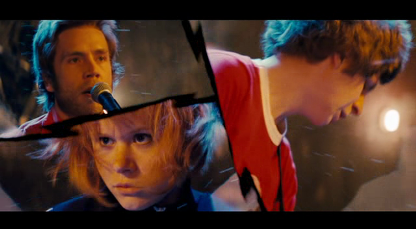 With Scott Pilgrim, a large part of it is the style. The camera work, editing and special effects are just excellent and they all combine to create a very unique method of story telling. The use of abrupt cuts, split screens, and over-the-top combat effects make the movie something that feels like a cross between a comic book, video game and an anime – which is exactly how this movie should feel. 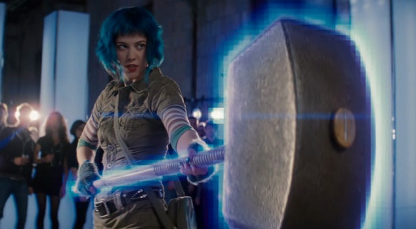 If you don't think this is awesom, I believe you don't internet enough sir

Based on my gushing approval, you probably should have guessed that I have not read the Scott Pilgrim comics. I tend to be much, much more critical of adaptations because… Well, most of them tend to suck. And it is not because it is hard to adapt a book or a comic into a movie format. Yes, it is a difficult task but it is doable. I think the problem usually lies in a failure to adhere to the original. Very often, instead of immersing themselves in the source material, do a cursory read and then “fix” the parts they did not like or did not understand. This combined with executive meddling almost always results in a shitty adaptation. So I wanted to know whether or not the movie lived up to the original and so asked Ark for corroboration. 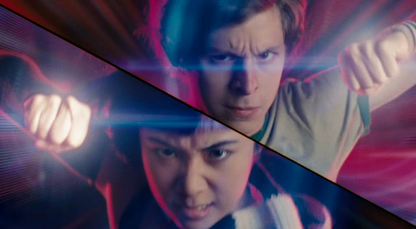 Also this... Tell me that the anime inspired combat is not awesome.

Unfortunately Ark only read the first volume of the series so his answers were limited in scope, but seeing how I do not know any other Scott Pilgrim fans, they would have to do. Allegedly the movie holds up to the comic fairly well. He didn’t have any major complaints or continuity gripes. It is as good as it could be given the amount of compression that had to be done in order to compress 7 volumes into less than 2 hours of film. 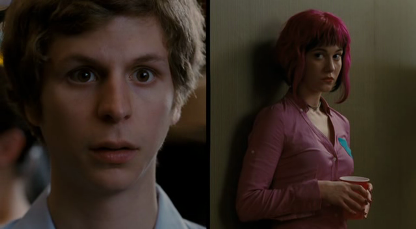 Michael Cera in one of his few non-awkward-teenager roles

I also asked about Michael Cera’s performance, seeing how a lot of people said the role was not necessarily up his alley. He told me something along the lines of:

“Well, Scott Pilgrim is one of those characters that can be a nightmare to cast for. I can’t think of a single actor who could reliably pull off Scott Pilgrim. But, for what it’s worth, Cera does an admirable job trying to bring this character to life.”

So I guess the answer is yes. I personally think that this might be one of Cera’s finest performances to date. It was great seeing him break out of his usual “awkward teenager” role and slip into a slightly more exciting “awkward 20-something who also kicks ass” character. 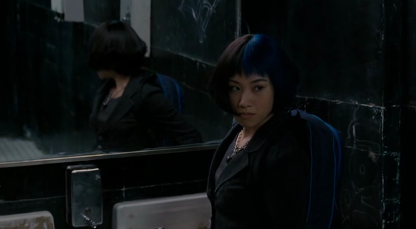 Knives Chau, before a vegan douchebad punches the hilights out of her hair.

Oh, and Ellen Wong (aka Knives Chau) is absolutely adorable. I double checked, and despite playing a jailbait in the movie she is actually 25 so I am legally allowed to say this . No, seriously. Ramona is all cool with her huge ban-hammer and all, but Knives is an overwhelmingly cute, Asian, Catholic schoolgirl, ninja. I mean, what is there not to like?

Bottom line is this: Scott Pilgrim vs The World is one of my new favorite movies. I loved it? How about you?

Also, Knives or Ramona? Which one would you pick? Let me know in the comments.


6 Responses to Scott Pilgrim vs The World