Man after Man by Dougal Dixon

I recently stumbled upon this peculiar book titled “Man after Man” by Dougal Dixon. Just one look at the cover hooked me. I mean, look at this cover. Is it anything but intriguing? 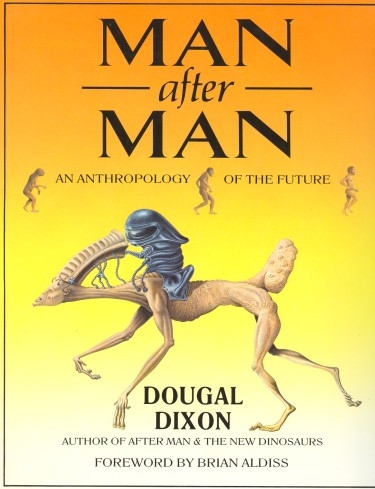 Anthropology of the Future

“Anthropology of the Future” eh? I’m interested. Wouldn’t you be? I mean, I totally want to know how the human species could possibly evolve from the current state to Monkey-horse Darth Vader thing from the cover.

So I read the whole thing, and I must say it is interesting. It is not really a novel, as it does not have a cohesive story. It is written in the style of nature documentaries, or these classic Zoology/Dinosaur books we all have read as kids. As it is suggested on the cover, Dixon aims to predict where evolution will take the human species in the next 5 million years. He factors in various variable influences such as coming of another ice age, magnetic pole reversal of the planet and human meddling via genetic engineering. Even though it looks and feels like a nature book, it is a work of pure speculative fiction. Dixon makes a lot of assumptions early on – such as introduction of genetically engineered human sub-species adopted to specific environments and then tries to guess how might have they evolved when left to their own devices. 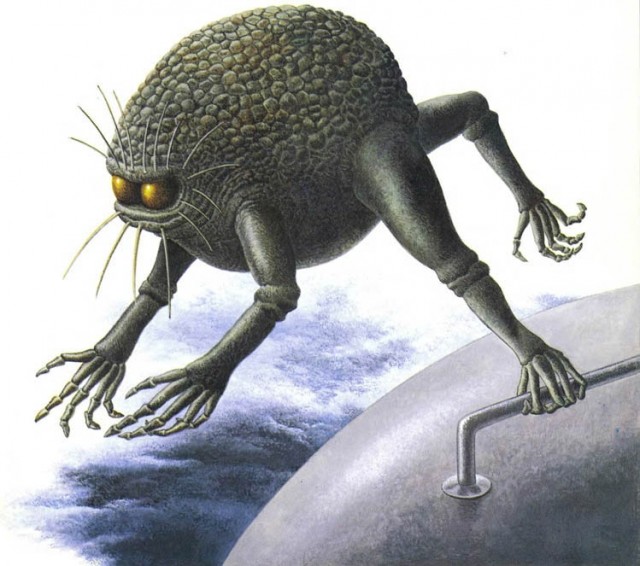 The entire book is a string of illustrated short stories that depict a “moment in life” of various descendants of the homo sapiens. The individual stories oscillate between dull and intriguing but in most cases give you a good overview of that particular species and its quirks with a little bit of personal touch. Dixon usually names his protagonists, and tries to write from their perspective giving the reader some insight to what these creatures would have had on their minds. 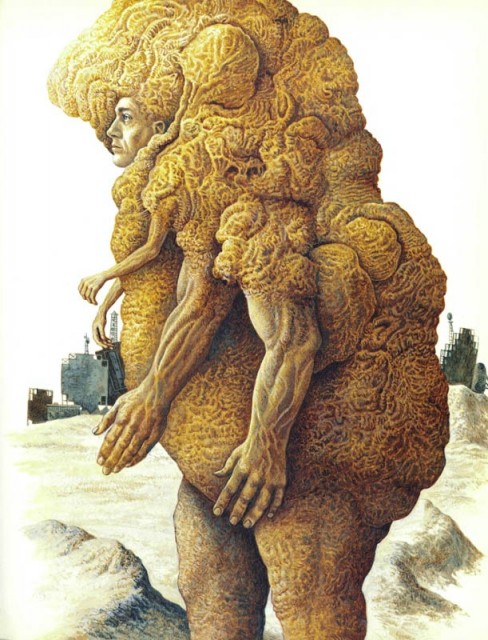 Hitek in his organic cradle

I must mention the artwork, which is pretty striking. As you can see, I included few of the images from the book in this post, but there are many more like it. Some of them are incredibly goofy looking, but still kinda interesting. Most chapters include at least one such image, many of them featuring a whole bunch. Dixon likes to show you close ups and cross-sections of various features such as modified limbs, skeletal changes or new organs. In fact, I would say these pictures are the main draw of the whole book. Without them it would be just a bunch of dry, mostly disconnected mini-stories. The illustrations however really bring the weirdness of Dixon’s imagined future to the forefront. They are also what keeps you reading the book. Whenever you hit a dull story, you can just flip a page or two, see a weird looking monstrosity, and you are instantly motivated to keep reading just to find out what that thing is all about. 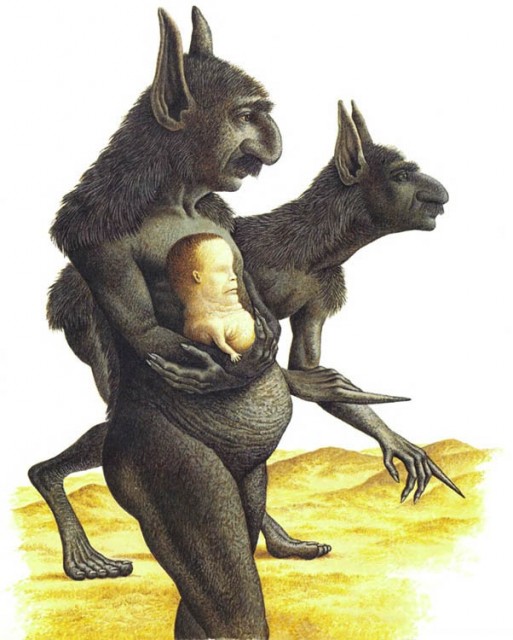 Some of Dixon’s assumptions are more of the fiction side of science fiction. For example, he predicts that in a response to changing environmental conditions one variant of our desert dwelling descendants will develop a psychic water seeking ability. Or that two human descended species will develop symbiotic-telepathic link that will allow the agile and intelligent hunters to control slow, dim witted and large carriers. There is of course nothing wrong with that, but the tone look of the book, often makes people believe that it is more scientifically grounded than it is. Dixon is basically world building and letting his imagination run wild, and we are there for a ride.

That said, I was a bit disappointed by the ending. I was really looking forward to the Horsemonkey Darth Vader explanation, and when it finally came, I thought it was a bit of a cop-out. Maybe it is just me though.

It is definitely an interesting book, an if you can get your hands on a copy at a reasonable price I would recommend checking it out. That is if you are into this sort of thing. If you don’t think reading a fictional anthropology book about made-up descendants of homo sapiens is not up your alley avoid it. Otherwise, I think you will be interested. Sadly, it is now out of print, and the few copies which are available on Amazon go for $60 or more. The book is definitely not worth that much money.

Good news is that the book is available online – though probably not legally. I will not post the direct link to it due to copyright/lawyergram concerns but I can probably point you to a reddit thread where I found it.


One Response to Man after Man by Dougal Dixon