Bob and Alice never met in person. They both lived in different time zones. Bob worked in a company located on the East coast, while Alice was a California girl working on the opposite end of the continent. Few decades ago, these two would probably never actually have an opportunity to work together. But since this is the twenty first century, their paths crossed when their companies started doing business together. Their, rather difficult relationship started with a rather innocent email exchange. One day, Alice sent bob a rather innocent message asking him to send over all the documents pertaining to the “Bouncing Shuttlecocks Incorporated” deal their companies were working on. Here is a faithful recreation of said message: 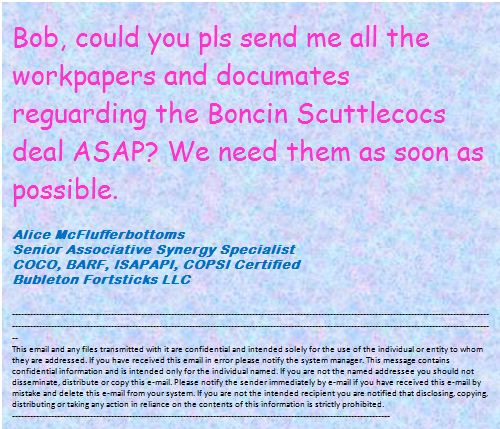 Now, this was not a trivial matter. Bob actually had quite a collection of files pertaining to that deal. He had all of them saved in about a dozen of folders in his work directory: C:\Cat Pictures\Deals\Bouncing Shuttlecocks Inx\. Each of these folders had a dozen sub-folders, which had their own sub-folders and etc… All in all, it was a large tree with 6 or 7 nested layers and few hundred various PDF, Excel and Word documents, and occasional Acces database scattered throughout. For most of his coworkers this would be a daunting task. After all, everyone knows that “Microsofts can only attach one document to each Outlook” so sifting through all these files, and sending them one at a time would take weeks. Alice specifically said to send them ASAP, or if not ASAP then at the very least, as soon as possible.

Fortunately Bob knew a thing or two about computers. He wasn’t a computer whiz, but he knew his way around technology and he was quite proud of this fact. He considered it one of his best selling points – he was proficient with Microsofts (all three of them) and also with Fox Fire which was like a virus anti-thing or something. His extensive computer expertise did not fully prepare him for a difficult request such as this, but luckily he remembered a trick that his 12 year old nephew shown him once. You see, there was this program you could download from the internet which would through some arcane, technological sorcery make bunch of directories into a single file. He did not remember what it was called but it sounded like Wind Zips or Zaps.

Bob quickly opened his Fox Fire by clicking on the blue E icon located on his desktop, and typed phonetic spelling of what he thought was the software name into Yahoo. Most of his peers used some new fangled thing called google.com, and swore by it but Bob didn’t actually even know where he could find it, and how to use it. He was loyal Yahoo user for many years… Although he liked it better back when it actually had the Yahoo logo on the front page. Few months ago they replaced it with a weird red oval with the word Ask inside. Bob didn’t like it at first, but he got used to it…

As usual, the first few pages of search results were completely useless. Bob briefly wondered why the folks at Yahoo did not try to improve the quality of results returned by their web browser, but he did not let that side track him. He learned a long time ago that you need to drill down a few pages to find the good stuff. Eventually he found a link that said “DOWNLOAD NOW” and click on it.

His screen dimmed down a few times, and some annoying popups appeared but Bob quickly cancelled them by clicking on the OK and Allow buttons. He knew better than opening some weird popup messages. Eventually everything settled down, and it almost seemed like he was back on track when suddenly his Microsoft AntiVirus 2010 started complaining about an expired license. Normally he would ignore this nag screen. After all, his company was supposed to provide this kind of software. He should not have to pay for such things from his own pocket. On any other day Bob would just close this window, and then make a mental note to call the IT people and straighten this out some time in the next 2-3 months. The support calls always take so much time, and Bob was a busy guy with lots of backlogged work. Unfortunately this time the problem was serious. A short lapse in payments apparently left his computer unprotected long enough to catch over 40 infections: 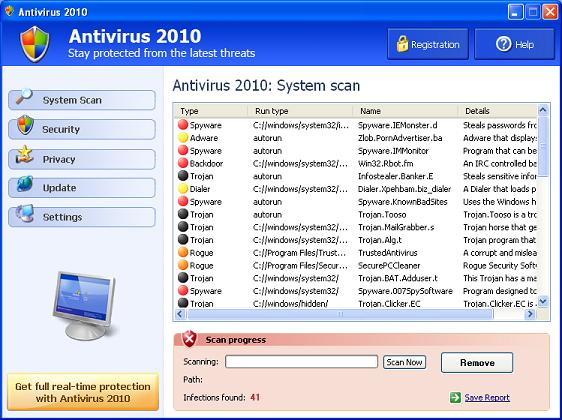 That damn Microsoft Antivirus... Always popping up at the worst times.

Bob faced a dilemma. He could call the IT department, stay on hold, and then talk to some foreign sounding teenager for like 3 hours, or he could just pay the renewal fee and then expense it. Obviously he opted for the latter option. He just did not want to deal with the IT. As far as he was concerned their IT was the worst he had ever seen. They never, eve actually fixed the problem he called with. Instead the would root around his computer for hours on end, finding and inventing all kinds of imaginary problems, changing his settings, moving things around, and etc. After every IT call, he had to go back and re-download all his free cupon applications, his FarmVille toolbars etc… Bob still mourned the unfortunate loss of his purple gorilla desktop buddy. His name was Bonzi and he was the funniest thing ever until the IT assholes deleted him, even though he specifically told them not to.

Fortunately, renewing the Antivirus software license was quick and easy. All he had to do was to type in his credit card number and his social security (for validation purposes of course – Microsoft would never save or use these anywhere). In five minutes flat he was back in business. Sadly the “Zips” software he downloaded didn’t really work properly. Fortunately, bob knew another trick – rebooting the computer usually solved a lot of problems. Well, usually it did. On most of days his computer would restart without any problems, but apparently this day was different. This day involved a persistent blue screen at boot time.

Bob went to an early lunch, and left a slightly annoyed looking IT dork at his desk troubleshooting this issue. On his way out he reminded the kid to check the anti-virus issue, and make sure he doesn’t have to pay for it again. The kid barked something back in some foreign Moon language, but our hero’s mind was already somewhere else.

Naturally, the troubleshooting took much longer than expected. As usual, instead of fixing the issue at had (weird blue screen error) the technician occupied his computer for two extra hours claiming he was removing viruses. As an act of revenge, Bob made him install Wind Zips and make the Shuttlecocks folders into one big file for him. Mostly, he wanted to see the kid squirm and fight with the shoddy software but surprisingly enough the entire ordeal took only a few minutes. Bob was a bit disconcerted, and disillusioned with his own skill. Then he remembered that this kid probably took computer science in college. They teach you all about wind zips in computer science so no wonder this guy was so good. Bob learned all his technology stuff on his own – and he was still better than most of his peers. This thought made him smile. Most of his co-workers wouldn’t even know about wind zips and fox fires. In fact, this issue ended up saving him time.

Once the IT guy was done, Bob quickly attached the newly created zip file to his email and sent it out to Alice. Or not…

You see, Bob did not realize that his file was actually 1.6 GB, and due to it’s considerable size it got stuck in the Outbox. He only noticed this about 2 hours later after Alice called him asking for a status update on her files. This prompted Bob to compose this here angry email and send it to an address he believed was the primary contact for his company’s tech support team. It wasn’t. It was an email of an IT department at Bob’s previous place of employment but details like this were irrelevant to our protagonist. 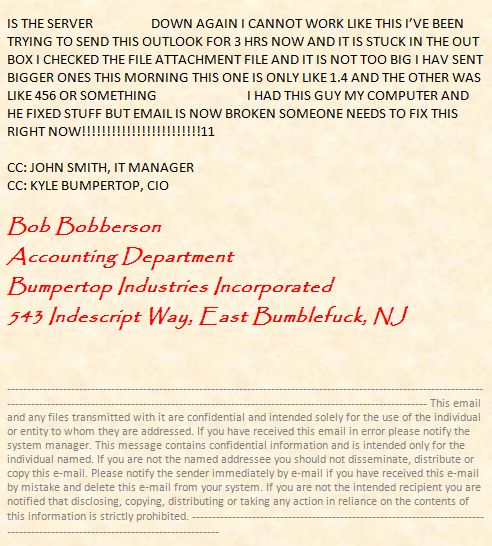 Bob's annoyed email to the IT department

You probably notice that Bob attempted to CC this email to several people by putting their names in the email body. That’s how he always did it, after all. Bob knew that the email server is smart enough to identify these lines in his email, and then deliver his messages to the right people. He was confident that seeing their bosses names on the email will be enough to get the lazy bums in IT working.

Of course his email never went out because Outlook was still preoccupied with chewing on that gigantic 1.6GB attachment on his previous email. So after much cursing, and rebooting his computer at least 4 times, Bob begrudgingly called the IT department again. Here is the exact transcript of this conversation:

Now, dear reader, imagine you are Sanjit. What would you do? What course of action would you recommend here?

All joking aside, this scenario is becoming quite common in most workplaces. We currently collect and move around more digital data than ever before, just because we can. And it is not just amount of data that is ballooning out of control – it is also it’s fidelity. Since we have more space, we can record more detail. In fact, we don’t even have to worry about our data being redundant because we have enough space. Our storage capacity is increasing in lock-step with processing power gains predicted by Moore’s law. But one thing that lags behind is our networking.

For one our bandwidth here in US is embarrassingly low for a first world country. There are currently no companies that will sell Gigabit connections to residential users. In fact, most ISP’s and mobile data carriers are busy instituting bandwidth caps rather than increasing their throughput. If it seems backwards to you, that’s because it is. It’s not that data carriers can’t keep up with progress. It’s that they are not interested in keeping up because it does not improve their bottom line. So as the amount of data grows every year, our transfer speeds remain the same, and bandwidth shrinks due to caps enforced by the carriers.

But it is not just their fault. The problem with data transfer is a complex one. For example, email was never really designed to send large attachments. Yes, it can be done, but for legacy reasons it is neither convenient, nor practical. It works fairly well for 5-6MB bundles of Word and Excel documents, but there are virtually no mail systems that are not going to choke when you try to feed them files larger than 50-80Mb.

You could always try to send files directly between two computers, but consider this:

Trying to send files directly between two personal computers is an unrealistic dream these days. It can’t happen without port forwarding on the router and changing firewall rules. The only way you can reliably transfer data is to involve some third party server to act as a go-in-between. But then you have to worry about data privacy and storing confidential information on servers you don’t own or control.

In other words it is a mess. And it’s a mess that remains mostly hidden from the eyes of non-technical people who simply can’t grasp the gravity of it. After all, no one ever has these kind of problems in the movies where technology always works and hackers have inhuman superpowers.

The worst part is that I just don’t see it getting any better. It is only going to get worse.

This entry was posted in sysadmin notes and tagged mostly true. Bookmark the permalink.