You have doubtlessly already seen this drawn meme-comic already, but I will repost it for the sake of the argument. While crudely drawn (or rather crudely assembled from copy and pasted bits) it gives us an interesting commentary on the way technology has changed our lives in the last decade or so. 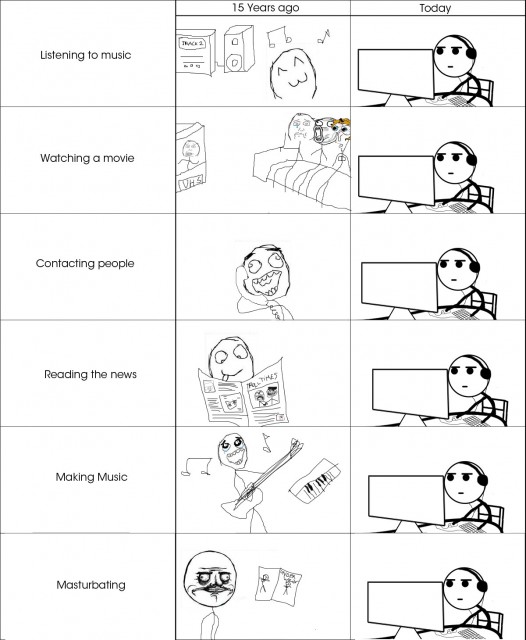 A common sentiment these days

Did you find yourself nodding in agreement to this? Did you find the comic a tad depressing? And if you did, why?

I think we can all agree that the premise here is flawed. Yes, it is kinda funny to juxtapose the joyful faces on the left with the same serious, semi-bored stick figure on the right. But, that look isn’t really boredom, is it? It’s concentration. The fact is that our lives are much, much richer, and more interesting now than they ever were all thanks to technology. And yet, I know a lot of people who would take this comic literally and agree that instead our technology impoverishes our lives, and steals the joy away somehow.

Let’s take music as an example. 15 years ago your main source of music was your local record store. When I was a kid, a lot of my friends were big metal-heads but unfortunately that genre was not very popular. Getting new records was always a quest – you had to take a bus or two to some god forsaken, shady neighborhood, step over several homeless people, shoo away the junkies trying to get some money from you, find the shady underground record store (most of them were literally under ground – located in basements and etc), and then tell the intimidating, tattooed gentleman that you would like him to do a special order. And then you would wait 3-6 weeks and repeat the whole thing again.

Ok, I’m exaggerating it a little bit but let’s face it – the amount of music you have on your phone right now probably dwarfs your cassette tape collection from 15-16 years ago, both in size and quality. And it cost you less money since you were probably able to buy most of these songs for $.99 a piece, or rip them from the CD’s you own, and you did not have to spend a single penny on blank media to create mixes you like.

I won’t even mention the breadth of your collection – you probably have songs in your collection by small, indie bands that you would never even heard about in the 90’s unless they were local. How is listening to music from deteriorating cassette tapes on a big clunky sound system better than carrying a rich, varied and personalized music collection in your pocket? It isn’t.

Movies? 15 years ago, if I wanted to watch a movie, I had to walk to the local video store. In the snow and up the hill both ways. Half the time they didn’t even have the movie I wanted. And of course they would invariably charge me a penalty fee because I did not rewind the tape before returning it. Just for comparison, few days ago my brother told me that I need to check out the Game of Thrones on HBO. Few minutes later I was watching the pilot episode on my phone. Horrible, eh?

Communication? Few weeks ago my mom called me on Skype from Poland and since I wasn’t home I picked it up on my phone. We had an international video-call, while I was in the passenger seat of a car, driving on the highway. And it was absolutely free. 15 years ago something like this was pretty much science fiction.

Making music? 15 years ago, the only way to get your music out there was to secure patronage of some pretentious record industry magnate. These days all you need is internet connection. You don’t actually need to sign away your soul to RIAA in order to produce your one hit wonder. In fact, you don’t even need to be that talented to become internationally famous – just look at the Chocolate Rain guy or Rebecca Black.

Technology has made our lives incomparably better, and claiming that it is somehow the opposite is silly. If you think it is bad that kids “sit around on the computer all day” then it is probably because you are getting old. They are not just staring at a box all this time. They are learning, socializing, creating and in general living richer, and more interesting lives that you did at their age. They are probably better informed, and have more refined tastes when it comes the their entertainment that you ever will.

What this cartoon really depicts is the technological convergence. 15 years ago, we had dozens of tools to help us accomplish our daily tasks and pursue our hobbies. Nowadays we have one – an internet enabled computer, be it a desktop, a laptop, a tablet or a smart phone – it’s all the same really. That tool will become smaller, and more portable as the time goes by. Eventually the boundary where you end and your tool begins will be blurred. Our network enabled processing unit and electronic storage will become a integral part of our anatomy. And then we will finally cease to be merely human, and become something more.