Captain America is the last big shared continuity Marvel movie before the big Avengers event of 2012. It is Marvel’s last chance to wow the audience and make them interested in the bigger project, and to get the critics to say something nice about the shared continuity. It’s needless to say I was very interested how it was going to play out. Perhaps even more importantly I was intrigued how it will integrate into the continuity, and how will it set up the inevitable crossover. What new is it going to bring into the mix?

The Incredible Hulk was pretty awful, but let’s face it – no one remembers it anymore. Most people usually forget about the green monster when listing movie Avengers. In fact, I doubt most movie goers even remember Robert Downey Jr.’s post credits cameo. So Hulk might as well have never existed. No one will base their decision to see The Avengers based on it’s failure. Is probably a good thing since Ed Norton is no longer attached to the franchise.

Thor was a rather infantile and clearly targeted at the youngsters, and it that aspect it was rather successful so it will probably put asses in the seats for Avengers premiere.

Iron Man was the opposite. It was aimed at the more adult crowd with a more nuanced, morally ambiguous protagonist. Robert Downey Jr’s weapon’s grade charisma will draw crowds despite the relative lack of plot or tension on both of his movies.

Captain America is the final statement – it is the movie that crosses all the t’s and dots all the i’s. It is the studios big play for the middle ground – people who were neither impressed with Downey Jr’s calculated snark, nor attracted to Chris Hemsworth’s bare chest or his Assgardian man-child antics. I was really concerned that the studios would focus group this production into oblivion. The predictable move would have been to make Captain America a safe, bland, boring and soulless action film targeted at the lowest common denominator.

Fortunately, this did not happen. They took some risks, and it paid off. Captain America is much better than The Incredible Hulk and Thor put together. It is about on par with Iron Man movies, if not better – but for very different reasons. 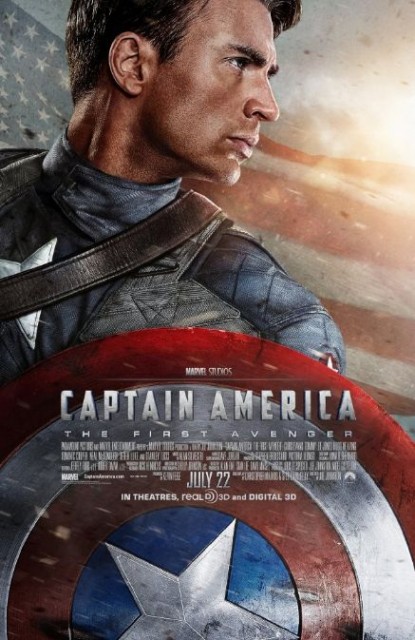 Let me get the complaints out of the way first. It seems that the common thread running throughout all the Avenger precursor movies is that they can’t seem to be able to write themselves a good third act. Just like both Iron Man movies and the Hulk, Captain America has a tension-free, weak third act. It’s flashy, it’s effective and it’s fun, but there is never anything at stake. There is a big final fight scene between Chris Evans’ Captain and Hugo Weaving’s Red Skull but compared to the rest of the film it is snooze worthy. You know the man wearing red white and blue is going to win, not because he is the good guy, not because he is coming back in the next movie but because the very first scene gives it away. The film starts with a group of researchers discovering Captains shield in a World War II plane that fell into the arctic ocean and froze. Where does the climax take place? In a plane flying over the arctic ocean. As soon as Chris Evans gets on that plane you know exactly how this movie will wrap up. The rest is just filler. There is absolutely nothing at stake when the protagonist and antagonist meet for the last time. Red Skull is not really “arching” (to use Venture Bros nomenclature) the hero. He is doing his own thing and the wonder-boy from the US is merely a nuisance to him. Similarly, Steve Rogers has no personal vendetta against the antagonist. Yes, he has personal reasons to fight Hydra and defeat it’s leader but he has no specific beef with Red Skull, making their final fight rather impersonal “strictly in the line of duty” affair.

In the end it is a landslide win for the Captain who doesn’t even get hurt in any significant way. To make matters worse the plane carrying scary weapons of mass destruction is thousands of miles away from its intended targets when the two throw down, so there isn’t any tension from that angle either. I found myself wishing for their brawl to end quicker so that I could see the the post-credits teaser trailer.

The entire third act seems rushed. Its as if Joe Johnston spent most of his allotted time developing the characters and getting the audience invested in them only to realize he completely forgot to shoot the big finale at the 11th hour. Three quarters into the movie we are treated to an action montage depicting Cap doing all kinds of heroic things over an indeterminate period of time, followed by a mad scramble to get all the dangling plot points resolved, and get the hero in place to be transported into the twenty first century. It very much reminded me of what happened at the end of X-Men: First Class. There is definite point abut three quarters into the movie where the director just went “holly shit, I still have have Magnetto and Mystique do the big heel face turn, have to turn Beast blue, cripple Xavier and also have a climax… Fuck it, we’ll do it live!”.

It’s pretty much the same here. Johnston takes most of the movie to establish how Steve Rogers became Captain America and leaves about a one sixth of the time to:

The third act is a clusterfuck. And it does not help that the villain is terribly one-dimensional. I love Hugo Weaving, but Red Skull is just a dull character. Very one-note, evil for the sake of evil, megalomaniac. He is a functional villain – it gives the heroes someone to chase and beat up but, but ultimately you don’t really care for him and his defeat is meaningless.

Of course, every single other Avenger movie also suffered from weak villains and poorly executed third act so this is sort of par for the course. So far only Loki have had a compelling, if a bit silly character arc and I guess it is fitting that he will be returning in the Avengers. Every other antagonist was basically just a forgettable one-note bad guy du jour.

Captain America is flawed, yes, but it actually has a lot good things going for it. For one, Johnston absolutely nailed the characterization of the protagonist. He took a lot of time and effort to really flesh him out, and show the audience what makes him tick. He did not half-ass it, he did not skip over into the action sequences. He detailed the painstaking process of transforming the skinny pushover into a true American hero.

Captain America title is a bit of a patriotic symbol. He is different than most other spandex wearing heroes in that his costume represents something much bigger than himself. You can’t just take some random guy, put him in stars and stripes and call him Captain America. It just wouldn’t work. That title has to be earned, and that’s exactly what you see in the first two acts. It is basically Steve Rogers slowly gaining the respect of his peers, the admiration of American people and organically growing into his role as a patriotic icon. Personally, I don’t think it could have been done any better than this.

Johnston made the absolutely right choices when portraying Rogers – there is no irony in his portrayal, no satire and no political commentary. He resisted the urge to make the protagonist have a specific political agenda. Rogers does not lean either left or right, he is a true patriot. He truly believes in the core values we all share, and does not concern himself with the petty stuff that divides us. He is a genuinely a good person – absolutely selfless, brave, determined, diligent, competent but not necessarily naive (unless you count his relative lack of experience in wooing the opposite sex). He is exactly the sort of person you would want wearing the Captain’s costume.

The first half of the movie is very well done. The origin story is told very well, in painstaking detail and with a lot of heart. Even the costume is explained in a way that makes absolute sense: after being infused with the Super Soldier serum, the Army decides Rogers is to valuable to send to the front lines, so instead he becomes a USO spokesperson doing publicity stunts and selling war bonds while wearing the stars and stripes costume. He happens to be wearing his ridiculous get-up while defying his orders and saving bunch of prisoners from a Hydra work camp and it becomes his trademark. It makes sense that he continues wearing an altered, combat-ready version of it seeing how other troops find it inspiring and morale boosting to be fighting side by side with Captain America.

The third act and the climax are the weakest parts, and the ending may come as a strange surprise to those who do not know that the Captain America background. The way they bring him to the twenty first century is a bit abrupt, though it is foreshadowed by the opening scenes.

Personally, I really liked it. I think it is on par with X-Men: First Class and Iron-Man movies. It is definitely much, much better than Thor, and Incredible Hulk. I have absolutely no clue how they are going to merge all the different personalities and storytelling flavors of these four distinct movies into a cohesive whole in Avengers. But after watching Captain America I remain positive. If Joss Whedon is careful and he plays his cards right, he might be able to produce something really awesome. I guess we will see how itgoes next summer.