I love books that explore interesting concepts. The Quantum Thief by Hannu Rajaniemi was a little bit of an impulse buy for me. You see, I have a running Amazon wish list. Whenever I stumble upon very favorable book reviews, or get good reading suggestions I add them on. Then when it’s time for me to order up a batch of new books, I just pick the best sounding titles from my list. All the research is done ahead of time. This particular book however showed up in the Amazon suggestion box. “If you like these titles, you may also like The Quantum Thief” it said. I read the content blurb, glanced at the reviews and went “why the hell not”. So it landed in my shopping cart, and shortly thereafter on my desk. 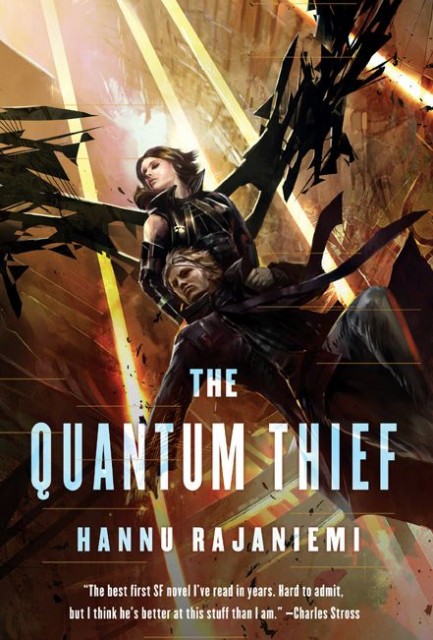 Book cover featuring the action chick and the gentleman thief.

I’m actually rather glad I bought it. It’s not necessarily a great book, but I would classify it as interesting. The plot and characters are more or less your usual space opera affair. You have a gentleman thief, a brilliant, a honor bound action chick and a likable sentient starship. For my tastes they were all a bit too perfect – too smart, too much on their game, to flawless. What can I say – I like my characters to be deeply flawed, twisted and fucked up. Granted, the main protagonist is not a complete Joshua Calvert – he is a bit more complex than that. But he is somewhere in that neighborhood at times. Of course this something you could easily forgive considering this is Rajaniemi’s first novel. As a debut story it actually holds up quite well. The author has a way with words, his descriptions are vivid and colorful and he prefers to show rather than tell.

What I liked the most about Rajaniemi’s novel is his concept of a society based on total personal privacy. Most of the story takes place in a peculiar roaming city on Mars. It is a place where people go to be forget and be forgotten. It is a place to start a new life. It’s one of the last bastions of humanity not controlled by post singularity transapient minds. It is a place where time flows slowly and human achievements actually matter. It is where artists, poets, musicians and architects flourish without having to compete against superhuman intelligences. They call this place the Oubliette.

If you happen to speak French or ever took some classes in this romantic language you will probably recognize the literal meaning of that word to roughly translate to something along the lines of “forgotten place”. But the word also has more popular connotations. I don’t want to spoil anything but Rajaniemi does tip his hand a bit with his name choices sometimes – I can’t decide if this is a rookie mistake (he does like to borrow exotic foreign words in lieu of neologisms), or just sloppy foreshadowing.

The idea behind Oubliette is rather fascinating. It provides all it’s citizens and visitors with technological means of maintaining absolute privacy. If you don’t want to be seen, you you won’t be. If you don’t want to leave any public trail, you wont. It is a society in which two roommates can share the same flat and only see each other on holidays, via invitation.

Rajaniemi describes the system that allows this sort of privacy to exists quite extensively, but he does it indirectly. There is no exposition info dump – instead the feeds you the information gradually throughout the novel. To me this was probably the most interesting part of the novel – figuring out how this technology works, based on hints and descriptions scattered throughout the text.

There are basically two elements which allow citizens of Oubliette to control their privacy. One of them is exomemory – a ubiquitous cloud storage service accessible over the air from any point in the city. Exomemory records and logs everything that happens in the city via a deep sensory layer that covers every inch of the habitable space, as well as through wetware implants of it’s citizens. Every thought, every gesture, every twitch and bodily function is recorded, tagged, and placed in the cloud. I know, this sounds like the opposite of privacy, but bear with me. The interesting part is that every bit of information logged by the city is encrypted. External memories from public places are available to everyone upon request, and they are essentially a substitute of the internet and news services. Memories captured on a private property or by by implants of an individual are encrypted with their private key and thus inaccessible to anyone else.

The second part of equation is Gevulot (from the yiddish word for borders) which is a hardware/software layer that allows you to generate, share or obtain keys for memories, as well as preserve your privacy while in public. It includes special wetware circuits, and artificial privacy organs that allow citizens to instinctively feel how much they are sharing, and with whom. Each memory or thought gets it’s own unique key so an individual’s gevulot will on average handle thousands if not millions of them – but thanks to powerful abstraction managing and sharing the keys is extremely easy.

Yes, people can share their memories just like we share notes. Since all of them are stored in the cloud, gifting someone a piece of your memories is just a matter of key exchange.

But that’s only one of gevulot’s functions. So for example, if you wanted to take a leisurely stroll through the park without being seen or disturbed you could completely shroud yourself from both the city sensory layer as well as well as praying eyes of strangers. Your walk would still be on the record but your identity would be encrypted and locked with your keys.

When two citizens randomly meet on the street their gevulot automatically exchanges privacy preferences and negotiates specific concessions. If someone does not want to be seen by you, then your gevulot will automatically blur/mute them out by interfacing with your visual cortex. If they wish to talk to you, then you will have to negotiate a gevulot contract which specifies whether this is going to be a public or private conversation, whether or not it’s contents can be shared with others, how much of it will be remembered by both parties, whether emotional reactions should be shared or if facial expressions and voice inflections should be algorithmically normalized.

How does such society hold up? Quite well apparently. Rajaniemi portrays Oubliette as a rather peaceful backwater populated by idealists and artists. It does not even have a regular police force. One would think that for some people the complete privacy offered by gevulot would be like finding the Ring of Gyges. You would expect this sort of place to attract all sort of deviants – thieves, serial killers, sociopaths, con artists. But there is almost none of that. While there is crime, it is mostly perpetrated by outsiders – mind thieves who siphon out talented individuals to be later used as virtual slave workers. Those are kept in check by a rag-tag group of idealistic vigilantes using smuggled-in advanced nano-technology and wearing colorful masks, and amateur part time detectives who use Sherlock Holmes school of deduction to skirt around gevulot barriers.

Oubliette is actually a panopticon – a total invigilation state built around mere illusion of total privacy. I mean what did you expect from a place that records absolutely everything in a centralized could service, and takes it’s name from a french word commonly used to refer to a dungeon. The elite group of mysterious “cryptarchs” holds all the master keys to the exomemories, and quietly deals with anyone who dares to rock the boat.

The Quantum Thief has more interesting ideas. Rajaniemi proposes an intriguing system which solves two post-singularity problems in one swoop. It provides a viable currency that retains value in post-scarcity economies and gives immortals something that prevents them from getting bored with their endless lives, and makes them cherish simple pleasures of life.

The main currency in Oubliette is time. Every citizen is allotted certain amount of time to live. This time can be traded among individuals for goods and services. If you are good at something or you can provide others with something useful, you can gain more time which you can in turn blow on toys, idle pleasures and etc. It is more or less crypto-currency based on very secure quantum computing algorithms and very difficult to forge. Once your time runs out, your gevulot switches off your body and you wake up as a “Quiet”.

Oubliette is a society of immortals, but it does have an afterlife of sorts. When you become a Quiet your speach centers of your brain are deactivated so you are unable to speak, write or even mime. You are given a biotic or mechanical body tailored for a specific task and some job to do. You sweep the streets, you build houses, you maintain city infrastructure, you clean the sewers – whatever is needed at the time. There are no cushy desk jobs – everyone gets allotted equally dirty and back braking labor regardless of their social class or status. As a Quiet you slowly earn your time back by doing menial, uninteresting jobs so that other citizens can live care free lives. Once your accumulate enough time, you get back your human body, and you get to do it all over again.

It is a very clever idea. Such an artificially imposed life cycle offers stability and grounds many folks who otherwise would not be able to deal with endless life. It serves to temper those whose tastes get too decadent, wet their appetite for simple pleasures of life, and the back breaking work may teach them some humility. Not to mention that it allows citizens of Oubliette live leisure, care free lives pursuing arts and hobbies without the need to maintain vast armies of robotic drones, and artificial intelligences to maintain them.

The Quantum Thief gets my recommendation. It’s a good read filled with some intriguing ideas and reflections on post-singularity societies. It is not perfect: the plot and characters are a bit lacking and some of the ideas could have been more developed. But it is forgivable considering the novel is a debut work of a fledgling new author.

Not to mention that this is probably the only novel you will read this year that features a walking city. Yes, a city with legs. Eat your heart out Howl, Oubliette has a whole city to your puny castle.