This was officially one of the worst weekends of my life. I have spent the 3 day holiday shopping for a new automobile, and enduring one high pressure sales pitch after another. But you probably don’t want to listen to me bitch about car shopping bullshit, do you?

So let’s talk about something else instead. Let’s discuss free online source code repositories. Or rather best project sites with integrated repositories. 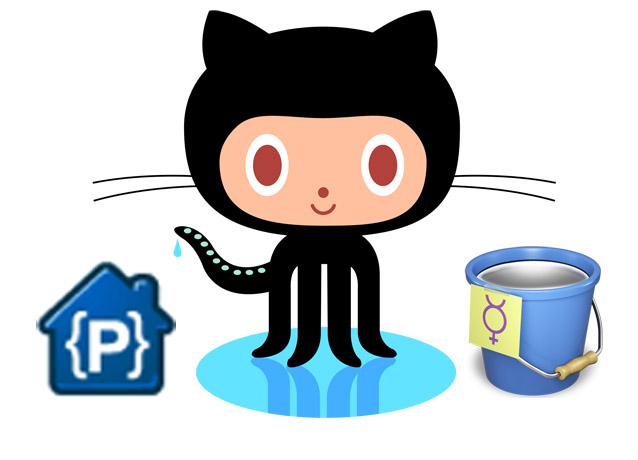 I have always been a big fan of Google Code. It has a clean interface, gives you a choice of using Subversion, Git and Mercurial, has built in Wiki and Issue tracking systems and download hosting. It is really a great package. Use of the tagging system all throughout the application makes it incredibly flexible. Instead of using hard-coded presets, it simply suggests nice defaults for categorizing your issues, assigning them severity, labeling releases and etc. The main downside is that you need to actually have a Google account, and I know that some people are vehemently against selling their souls to the search giant. Me? Google has devoured my soul so long ago, I can’t even remember having it – so it was not a problem for me. No, seriously. When I bought my MacBook I even got an nasty email from Steve Jobs about my soullessness.

Eventually though, I discovered GitHub. I have always been a Subversion person, but I started using git due to peer pressure. All the cool kids were doing it, and I just wanted to see what it was all about. I tried it once and it was pretty cool. So I did it again, and again, and again. Next thing I knew, I was on my knees in a dark alley uploading source code to GitHub. And I really, really like the Hub. It is not as clean and simple as Google Code, but it is much more powerful. I love that it allows me to fork someones code straight from my browser with a single push of a button. The community and collaboration features are just unmatched. And this seems to be the hip place to be these days.

Unfortunately neither GitHub nor Google Code offer free hosting for proprietary projects. And seeing how I have one project which I’m a bit embarrassed to release into the world, this was a bit of a problem. I could of course just use the private Subversion repository on one of my servers. But let’s say I wanted something similar to GitHub or Google Code. Something with a nice web based interface, project/issue tracking, stats and etc. Well, there is BitBucket. I only started using it last week, so I really can’t attest to it’s features. I know that it lets you create free private repositories, and that it’s current interface seems to be heavily inspired by that of GitHub. Unfortunately it requires you to use Mercurial.

I’m currently using all three of these, plus some private SVN servers. To wit, my Windows box has been overrun by Tortoises. No, I’m not kidding. I am really fond of the Tortoise brand UI tools, so I am currently running:

I just need one more, and I can use them to re-enact Teenage Mutant Ninja Turtles episodes.

So what is your favorite project site? Which one do you find yourself using the most? Here is a poll:

Feel free to add new project sites to this list.

I realize we did something very similar last year, just for the version control systems themselves. Git was the clear winner. You see that poll here.