The Year of the Flood by Margaret Atwood

Long time ago, some time in the 90’s I presume, the literary science fiction magazine I subscribed to, used to run a series of editorials titled something like “The Return of Feudalism”. They were all written by a Polish expat who has found gainful employment in American silicon valley and became fascinated by the American corporate culture and it’s impact on the society. One of the leading themes that spurred this series of editorials was the culture shock he experienced when he left the safe, sterile marble halls of his corporate campus, the beautiful corporate owned suburban gated community (with it’s manicured lawns and the immaculately clean shopping mall on it’s outskirts) and accidentally got lost in the “bad part of the town”. He saw all the rundown houses, homeless living on the street, gang tags spray painted on every available surface, garbage, filth and disarray. All of that existing only a short drive away from his place of employment. Granted, this is not particularly shocking since wealth such display of wealth disparity can be found in every nation. Still, it inspired him to write a series of articles in which he theorized of what would happen if you allowed this gap between the rich and the poor to grow unchecked over many, many decades.

In his articles he crafted a vision of fictional, alternate near future America in which corporations corrupt and supplant the government and the middle class dissolves under economic pressure. He envisioned the former superpower becoming something akin to a fractured jumble of quarreling corporate micro-nations. He compared it to medieval Europe, with corporate compounds in the role of the heavily defended castles and city-states. Safe harbors, cultural and intellectual centers, places of law and order – defended by private armies of corporate mercenaries. In between there would be lawless pleeblands populated by illiterate peasants living in perpetual poverty. There would be highway men, roving gangs of bandits pillaging local villages, disease, death and poverty. I remember being fascinated by the idea of a global superpower turning into a pseudo-feudal fiefdom as a function of it’s own economic success. At the time I thought it was a very interesting work of speculative fiction without being overtly concerned by political message it may or may not have carried. To me it was more of a Mad Max type scenario – with nuclear apocalypse replaced by gradual process of deregulation, corporate greed and class struggle.

Much, much later I have stumbled upon Margaret Atwood’s novel Oryx and Crake and was overjoyed to discover that she built it around a very similar set of concepts. Middle class is gone, and forgotten. The lucky minority of citizens are in thrall to mega-corporations. In exchange for their services they get to live in clean, safe heavily defended corporate compounds. They shop at corporate owned malls, they attend attend corporate schools and universities, and watch TV networks produced by their corporate overlords. They live their entire lives in these pristine clean, orderly enclosed microcosms. When they need to travel to other compounds they take hermetically sealed bullet trains with six inch thick bullet proof glass windows a detachment of corp security soldiers in full combat gear and machine gun turrets on the roof.

Outside the compounds there is only chaos. All governing bodies have collapsed, so the only law enforcement are corporate security teams (who usually only intervene in cases affecting their employer) or local gangs. People’s lives are short, violent and full of hardship. Fewer and fewer people are able to get jobs from the mega-corps because they are becoming more and more self-contained breeding their own work-force (from floor sweepers to high paid scientists). Most live in extreme poverty. Without governmental oversight corporations are running rampant, dumping, polluting and destroying both human communities as well as natural reserves with reckless abandon. Environmental collapse is imminent. So is a revolt of downtrodden, increasingly more illiterate masses who grow jealous of the corporate wealth.

I never wrote a review for this book, because I read it before I even had this blog. It has been a while, but I still remember it rather fondly even though I did not really buy into it’s message central message about evils of unregulated capitalism and dangers of unbridled science. I actually kinda liked the high science technocracy of the corps, which valued scientists and engineers above all else, and wasn’t a big fan of the environmentalists who were seeking to fix the world’s problems by rebooting the human race. But it did have an engaging story and interesting characters.

When I found out that Margaret Atwood wrote a sequel I immediately picked it up without even reading the little plot summary on the back. I was sort of intrigued how a sequel would work, considering the rather pessimistic, though poignant ending of Oryx and Crake. Well, it turns out that The Year of the Flood is not an actual sequel, but rather a parallel retelling of the same story. It’s kinda like when Orson Scott Card decided that he needs more money so he re-told Ender’s Game from the perspective of a different character. 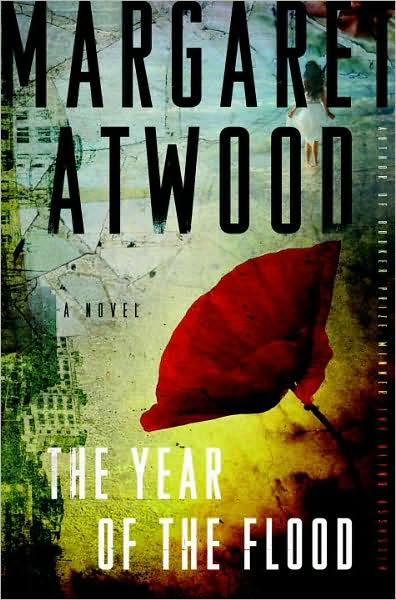 Let me put it another way – The Year of the Flood is a bit like watching Back to the Future 2. When Marty goes back to 1955 to recover the sports almanac we get to re-experience bunch of scenes from the first movies, and we get to see things that happened before and after them when the hero was not around. That’s how I felt when reading the book.

The novel starts fine, attempting to re-tell the story from the perspective of poverty stricken pleeblanders struggling for survival in the lawless wastelands outside the corporate compounds. It introduces a number of interesting characters, and a cooky religious sect of vegetarian environmentalists who takes them in, and provides them with a safe harbor against local gang violence. So far so good. But as the plot progresses Atwood has to bend herself backwards in order to get the stories of these characters to intersect with the events from the former book. Cue in a barrage of contrived plot devices and unlikely events that explain how a given character was in a specific place at a specific time to make it all work. It seems like the whole thing might have been much, much better if Atwood did not have to work within the framework of her own story.

So I guess this is a lesson. If you are a writer, and you are tempted to re-tell one of your popular stories from a different point of view, just don’t. If you are a reader, tempted to buy such retelling, don’t. I assure you that you will be disappointed.

Although I must admit that Atwood does one thing very well – she writes great female characters. The only thing I really liked in The Year of the Flood was Toby who could be a case study in how to write strong female characters. This is one of the things that a lot of writers get subtly wrong. Whenever there is to be a “strong female character” in the story, chances are that the writer will veer in one of the two extreme directions. You will either end up with sexy action chick (who is more or less a titillating eye candy) or fierce, asexual and almost masculine career lady (which is what happens when the character is written as if she was a man). Granted, writing compelling female characters without being sexist, clishe or patronizing is something incredibly difficult. I think Atwood pulls it of quite well. Toby is strong, driven and capable without ever sacrificing her femininity. At times she is vulnerabilities and insecurities but she never becomes a damsel in distress. She can be sexual without being sexualized or without fawning over some guy.

So that’s The Year of the Flood. A bit contrived, and forced retelling of a much better story Atwood already written few years ago. Environmentalist, anti-corporate preaching is cranked all the way up to 11, but I guess that sort of goes with the territory seeing how most of the action of the book takes place inside of a “green” religious cult. There is no new message, and new revelations other than rater too-convenient happy ending. Not great, but it does have compelling female characters. I would recommend reading Oryx and Crake instead.

For the record, this review is not meant to be political. I have tried to stay clear from making any statements current political issues or liberal vs conservative agendas and just talk about the concepts and ideas in the novel. Atwood’s book can be considered politically charged, but I choose not to do so – I view it as a work of fiction, talking about a post-apocalyptic dystopia and nothing else. I do understand that some of these themes may be a hot button topic for some readers more than the others but let’s not try to bicker about which side of the isle is in the right and talk about it as what it is – a SF novel.


8 Responses to The Year of the Flood by Margaret Atwood