Day in Life of an Elven Huntress

So I have been playing a lot of Skyrim lately. I already wrote a rather lengthy post about my initial impressions, so if you would like to know that I think about the stupid interface, and bugs go there. You can also follow me on twitter, to see all my Skyrim centric updates. I usually tweet stuff via the Steam Browser while I play.

I really like this game, but I’m not far enough into any of the quest lines to talk about the plot. I haven’t seen enough of the game world to talk about the setting and how it stacks up against Oblivion/Morrowind. So I figured I’ll do something different. I figured I will show you how I waste time in the game making my own adventures in a comic book form. 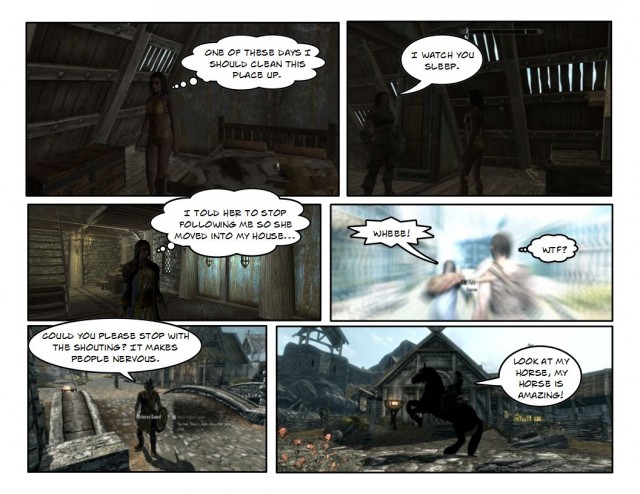 One thing I hate about houses in Skyrim is that they start as absolute shit-holes and you have to spend money to upgrade them. In Oblivion I bought a shack in Bravil, and it came equipped with all kinds of essentials: tables, chairs, weapon racks, chests, etc. It was ready to go. In Morrowind I always just kill Dura gra Bol and take over her house, which comes fully furnished. In Skyrim I have spent 5,000 gold to buy a mansion in Whiterun and it came equipped with a wide assortment of spiderwebs, and raggedy-as bed. The only furnished part of the damn place is the cubbyhole where my Housecarl took residence. A cubbyhole directly adjacent to my bedroom. A cubbyhole without a door. Sometimes I wake up in the morning, and see that fully armored woman standing at the foot of my bed, just staring. What is up with that?

Also, I am addicted to the Whirlwind Sprint. I abuse it all the time when I’m in towns, up to the point where the guards pester me to stop. But I never will. It’s just too much fun.

When I was gathering screenshots for this comic, I figured I would just go outside Whiterun and look for picturesque locations. Then a wild deer crossed my path, so I decided this will be all about hunting. 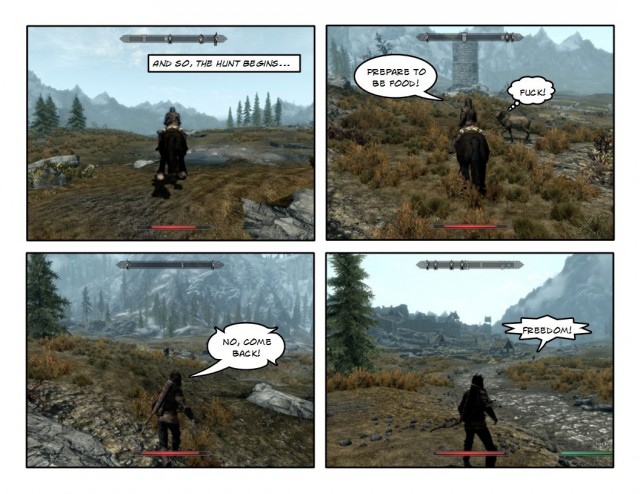 I have absolutely no clue why Bethesda never bothered to add horse combat. That feature was rumored to have been removed from Oblivion because they did not have enough time to test it. People bitched and moaned about it then, and the number of mods that added horseback combat was in triple digits. And yet, here we are – years later, and I still have to get off the horse to shoot a deer. Or to swat away an annoying wolf nipping at my feet. It’s positively silly. 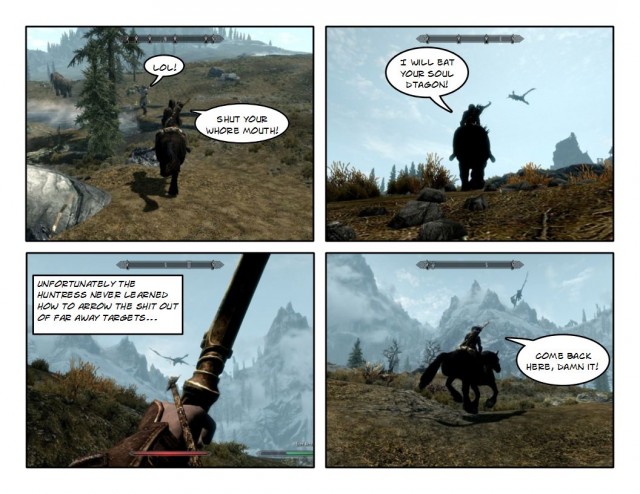 I really like the Giants. They just walk around, mind their own business and chill like complete bros. Gotta respect that. One time I was chased by four brown bears that I have somehow aggroed on my trip, so I rote past a giant. He fucked all of them up for me. I wanted to high-five him, but Giants just don’t give a shit. They are cool like that.

Dragons on the other hand are complete assholes. When you are low on hit points, or you are on a quest and just want to get from point A to point B they seem to be hiding behind every hill. You will be riding your horse minding your own business, and they drop from the sky like the mighty hammer of Thor, and ruin your day. But when you have shouts to unlock it’s like they know. Then they stay the fuck away from you. They will circle above your head, just trolling but they will never aggro. Always too far to shoot at, but too close to ignore. Fuck dragons. 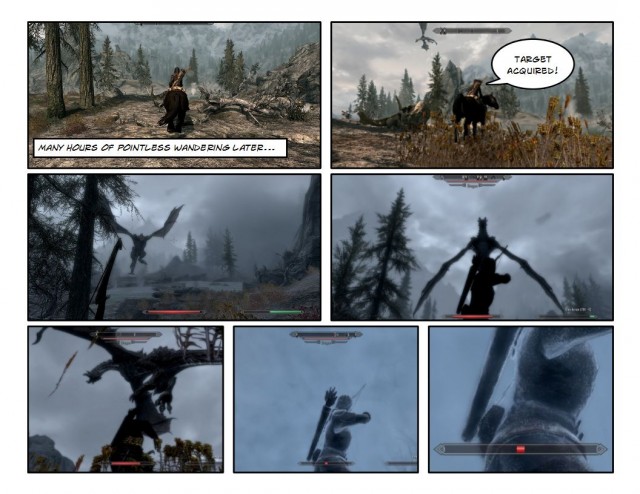 Initially I was intimidated by them, but I have quickly learned that they are not as scary as one would think. What really hurts you is their bite. Their breath attacks on the other hand can be withstood with some liberal use of health potions. If you have a good bow, and a good poison, and you keep them at breath attack distance you can pretty effectively needle them to oblivion with your arrows. The main problem is finding them, and getting them to fight you. 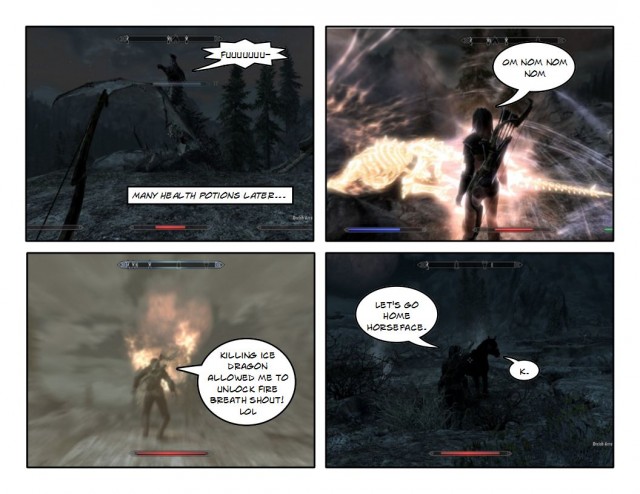 Quite amazingly, by the time I tracked down and killed this damn dragon the in-game day was over. So I decided that what my screenshot driven post would be. A day in life of a huntress.

Note that I haven’t turned in a single quest, I have not advanced the plot, I have accomplished nothing, and yet I still had a blast. This is one of the great strengths of Bethesda sandbox games – they allow you to wander around aimlessly and make your own adventures. In fact, they purposefully build their locations in a way that facilitates this game play. As you explore, you inadvertently stumble upon things to do.

What are your favorite Skyrim sandbox adventures so far? What is the craziest thing that has happened to you? Let me know in the comments. Please try to keep it spoiler free for those of us who might not be as far into the game as you are.


8 Responses to Day in Life of an Elven Huntress