I already mentioned that Skyrim is probably the least complex Elder Scrolls game to date. In fact, I will go out on a limb and say that it is the least complex Bethesda RPG ever. Usually complex character creation process was replaced with a single choice of your characters race. The ability to tag minor/major skills, use classes, gain additional bonuses due to birth signs and etc is out of the equation. Skyrim is very simple and very small. It has a tiny map, and very short quest lines for all the major factions you can join. I remember that in Morrowind each major group had 4-5 quest givers, all of whom had dozen of tasks for you. Rising through their ranks really felt like work, whereas Skyrim makes you the faction leader after about 5 or 6 missions. The game is positively tiny when compared to other Bethesda sanboxes.

But, Skyrim has one unique feature that is supposed to make up for it’s size. It is a feature it shares with no other Bethesda product: procedurally generated quests. Yes, you heard that right – Skyrim will randomly generate new quests for you, creating virtually endless amount of game play.

We briefly touched upon this subject when we discussed Project Frontier few months ago. Back then I wondered why no one was actually doing this sort of thing for creating random quests. After all, the very concept of procedural content generation is about as old as the history of RPG games on the computer. It dates back to the old-school ASCII games such as Rogue and NetHack which featured randomly generated dungeons and magic items. You thought I will mention Diablo, didn’t you? But no, Diablo and it’s many, many clones basically ripped off the Rogue formula, minus perma-death. But that’s a whole other story. Nowadays procedural terrain generation is back in vogue thanks in part to runaway success of titles such as Minecraft. But, no one has really done much in terms of procedural quest generation.

Why? One possible reason might be voice acting. Most of modern games are fully voiced, and as such, do not lend themselves well to procedural quest generation. The logistics simply don’t make sense.

And yet, here we are…. Skyrim has what they call a “Radiant Quest System” which works in parallel with regular scripted content. It collects information about your progress, and it adds quests appropriate for your level that concern places you have already visited. Bethesda claims that this system can add a potentially infinite amount of original game that will extend the amount of time people spend with their shortest, smallest and least complicated Elder Scrolls title. But is that true? I decided to find out.

When I first read about this technology I had mixed feelings about it. On one hand I was curious to see it in action. On the other hand, I didn’t really believe it could be any good. It sounded like an admission of guilt rather than a genuine innovation.

“Guys, we know our game is tiny but here is some half-assed, randomly generated filler content. Enjoy!”

Here is how I envisioned it: you walk up to an NPC, and you hear “Hey, could you do me a favor and pick up these things for me?”

At this point a note with a list of ingredients appears in your inventory. You know, stuff like ten rat tails, seven wolf pelts, twelve iron cups, eight Nirnroots, etc… The kind of stuff that falls out of animals or bandits when you hit them upside the head with a mace. So you go on your merry way, and collect every wooden cup, fork and linen cloth in sight to cross it off your list. After you have everything, you go hand it in, and get another list of different ingredients. More or less like a daily quest in World of Warcraft – dull, uninspired and boring.

It turns out I was wrong – at least in part. The Radiant Quest System is not nearly as bad as I expected it to be. In fact, I must say I was rather surprised how well it worked. For one, there are no notes. Nearly all radiant quests (at least those I could identify and radiant) were fully voiced. Furthermore, almost none of these were silly, MMO styled fetch quests.

A good example of how the radiant system works is the Dark Brotherhood end game. Once you finish their quest chain you can still go to their sanctuary and pick up contracts by approaching the Night Mother coffin. They are fully voiced assassination quests that are quite similar to the few of your initial contracts. The only thing that tips you off this is a procedurally generated content is that you are now killing no-name NPC’s. For example, my first quest was to a “nervous patron” in a specific drinking hall and discuss a contract. Upon showing up at the designated location, an NPC labeled “nervous patron” asked me kill a “shield maiden” walking the streets of Markarth. He did not have any other dialog lines, and would not elaborate on the nature of the mission. It was brief, and to the point “go to place X, kill person Y”. I did about a dozen of these just to see if the sound-bytes would start repeating but they did not. It seems that these quests work of a large sound bank of recorded lines and use clever sound editing to make each quest briefing seem unique, which is very nice

Do these quests still fill like a filler content? Yes they do. You can’t beat the manually scripted quests with pre-recorded conversation that tell you more about your goals and targets. This is especially evident when they tack them on as faction end-game play. For example, the Brotherhood quest line culminates in an absolutely epic assassination contract that just can’t be topped – the kind of stuff that makes contract killers retire on the spot. But in Skyrim you are asked to go back to petty murder immediately afterwards and it almost feels like a demotion, and a waste of your skill. 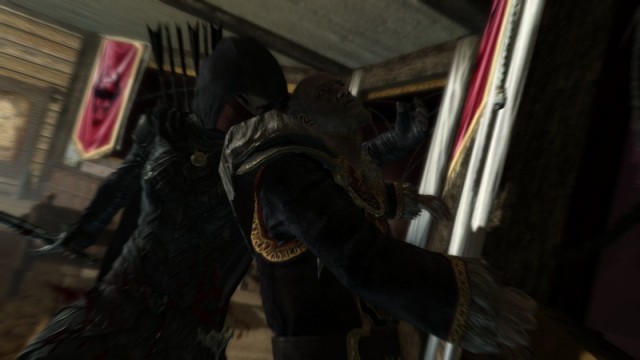 On the other hand, there was obviously a lot of work done to make the radiant missions blend in with all the other content. You can’t blame Bethesda for not trying. The result is much, much better than the “kill ten rats” stuff I was expecting. So I guess my impression is generally positive, but reserved. I just don’t see myself getting a lot of millage out of radiant quests. They tend to be on the bland side – not nearly as colorful and interesting as the regular assignments. Not to mention that they never, ever end. This means that upon starting a radiant quest you will have a permanent entry in your journal, and a mark on the map that you can hide, but never remove. It is about as bad as that DLC quest guy in your camp in first Dragon Age Orgins. It wrecks havoc with your completionist OCD.

What is your take on the radiant quest system? Which of endless radiant quests have you unlocked so far? Would you have noticed it at all if I didn’t mention it? Let me know in the comments.