This is a bit of an unusual post. I don’t even have a proper category for it. It does not really fit with most of the other content you read here, but I figured I might as well say write a bit about the biggest project I have underwent in years. And it just so happened this project had nothing to do with technology, video games or other geeky interests. It was a massive, long term life hack.

For the last few years… No scratch that. For the last decade I have been living a rather unhealthy lifestyle – eating poorly, not getting much in terms of exercise and etc. Most of my waking hours of the day have been spent sitting – in a chair at my desk, in my car, at my computer desk at home, etc. In other words, I have been living the kind of life style that my body was never designed for.

Homo Sapiens have evolved as hunter gatherers, and endurance runners accustomed to trekking across the Pleistocene savannahs in search of edible things that can be scooped up, or whacked with a stick. Most of our existence on this planet as a species has been spent either chasing after food, or running away not to become food. Our bodies are perfectly adapted for just that. While most animals use fur for thermo-regulation, we use an all-over subcutaneous layer of fat which not only helps to control heat exchange but also lets us package any surplus calories we ingest for later use. Our sweating mechanism is one of the most efficient heat dissipation methods in the animal kingdom making us perfect long distance runners. While we are not the fastest beasts out there, our energy/heat management, and our low friction/low energy bipedal gait let us us to out-walk just about any animal. Early Pleistocene humans used these natural adaptations to tail prey until it dropped out of exhaustion, then whacked it upside the head with a stick, and still had enough energy to drag it back to their cave.

We actually haven’t invented laziness and “being fat” until a few centuries ago when the agricultural revolution gave us a reliable source of food that did not need to be chased. Our civilization has been growing at an astonishing exponential rate of progress, and the slow process of natural selection / evolution has simply been unable to catch up. We still have bodies of Pleistocene endurance runners, but many of us lead lives that do not require much in terms of physical exertion. What’s worse, we have easy access to high caloric diets our ancestors could only dream off. All the surplus energy we consume but don’t spend, gets packed away for a rainy day in our fat tissue. Thanks to our civilization being stable, and comfortable institution such a rainy day never comes and so we become fatter, heavier and less healthy.

This is what happened to me. A sedentary life style combined with careless dietary habits resulted in me putting on quite a few pounds. Let’s face it – being an introverted geek working in tech industry carries enough of a social stigma. Throw in being fat into the equation and your are getting dangerously close to becoming a walking stereotype and/or punchline. One day I got fed up, and decided that this weight gain thing can be hacked and made to go away. And it can’t be all that difficult either. After all, have you ever talked to the meat-heads at the gym? They are not what you would call the brightest crayons in the box, but they manage to maintain a fairly competent grasp on their weight just by using some dietary restrictions and exercise.

So since about June I have been working on tactical weight reduction and I think I did pretty well so far: 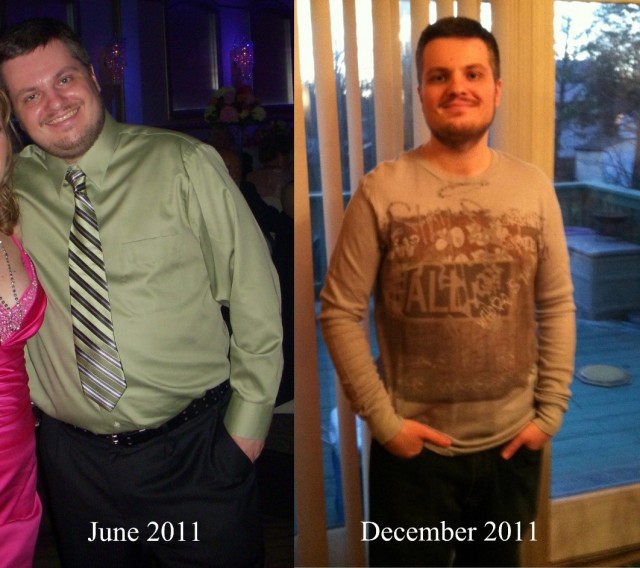 Before and After - this is still work in progress

In about 5 months I have dropped a bit over 50 pounds, and went down from pant size 42 to 34. Most of that was done by simple calorie intake reduction, because my lazy ass did not feel like going to gym very often. I only threw regular cardio exercise into the mix at the beginning of December.

Weight loss is a big business – it’s an industry in and of it’s own. My weight problem was not unique – a lot of people find themselves in a very similar situation. There are tons of resources out there that claim they have mastered a perfect system that will work for you. Some of them work, others don’t. The point is that you don’t really need any of them. You don’t need weight watchers, you don’t need Tae Bo, Zoomba or whatever else bullshit is trending these days. I did it without any of them.

Here is all you need to know: if you want to lose weight, don’t eat so fucking much.

It sounds simplistic, but it’s true. If your weight is related to metabolic problems rather than poor diet and lack of exercise, then you are playing a completely different ball game. But for an average fat slob like me, the problem is ingesting more calories than can be burned in a day. When you do that, surplus is squirreled away into the fat tissue. If you eat less calories than you can burn, the deficit is taken out of said energy storage. Your body is more or less a deterministic machine in that aspect.

And yes, there are other nutritional factors that play the role here: saturated fats, carbs, sugars, etc.. There have been books written on the proper balance of all the different food groups and their effect on weight. But calorie intake is by far the biggest, and most important factor. When you start counting calories you will usually get reduction in your consumption of fats, carbs and sugars as a freebie bonus. Most low calorie foods contain lower amounts of those things almost by default. They are tailored to more health/weight conscious consumers – a market where you want your nutrition label have the most zeros, and the smallest numbers in every column. Think of calories as the CPU clock speed of your food, and the other nutritional detail as secondary details cache, bus speed and etc.

How many calories you need to eat is a tricky question because it depends. There are about a million calculator tools online where you can plug in your weight, height, age and sex and it will give you a ballpark number you need to maintain a stable weight. You go under that, and you are in mass reduction territory.

Here is what worked for me: I have almost completely cut out sugar, and sugar substitutes out of my diet. I drink my coffee with a splash of milk these days, and it actually tastes better that way than the cream and sugar soup I used to devour. Plus I get to pretend to be a coffee snob now so it’s cool. I also severely limited my carb intake by kicking out white breads, pastas and similar items from my daily diet.

I also gave up diet sodas and artificial sweeteners. There is a lot of contradictory research out there about these things and I’m not sure how much of it is factual. I honestly did not dig deep enough. The fact is that according to some claims things like aspartame may potentially fuck with some of your neurotransmitters that are responsible for appetite control. I used to drink a lot of diet coke in the past, and I can attest that since I have quit it, I had much less of an urge to “graze” on snacks between meals. Granted, this is anecdotal, and not scientific evidence – still, swearing off soft drinks of the “diet” variety and artificial sweeteners is probably a good idea when you are trying to shed pounds.

Other than that, I just counted calories and used common sense (ie. get a salad instead of a burger or for lunch). I did not give up these things though – I will still eat all kinds of garbage, but I just cut it out of my daily life. Once in a blue moon I will treat myself to a disgustingly fattening decadent meal, but then I go straight back to calorie counting, healthier choices and exercise.

This is sort of the the lynchpin: commitment. You can’t view it as a “diet”. Diets don’t work, because by definition they are temporary. The only way to get any results is to view it as a lifestyle change. You have to accept that you will be eating healthier food, and watching your calorie intake for the rest of your life. In fact, you will have to be more rigorous about your regimen as you age, as your metabolism is going to keep slowing down. I have tried losing weight in the past, but I have never treated it seriously. This time around I decided I must make a permanent change, and accepted the fact that I will have to curtail my eating habits. Once I did that, it sort of became effortless. All it required was a little bit of willpower to prevent myself from grazing and snacking. That and exercising some common sense when shopping for food.

Anyways, I just wanted to share my little accomplishment. I know it has absolutely nothing to do with the usual topics on this blog. I probably won’t be mentioning it ever again, but this weight loss project has been a big part of my life lately, and I figured I might as well share it. Especially since it might actually help some of my fellow geeks with similar sedentary lifestyles.