Recently, I have finished Batman: Arkham City. I have been trying to figure out how to review it for a few days now. I’m really not sure what to say about it. I actually kinda liked Arkham Asylum, and this one is a very similar game. In fact, it is an improved game.

A lot of my gripes from the previous installment were fixed in this one. For example, Batmaning around the city feels great now. in Asylum, the grapple points were a scarce resource. Most of the time, you were constrained by chest high walls that you could not Batjump over. You could Batglide using your cape sometimes but the level design limited the amount of distance you could cover very carefully by never putting grapple points where you could glide, or glide friendly open distances where you could grapple. In Arkham City, every building has multiple grapple points, and gliding is your primary mode of locomotion. You can avoid 90% of the open would combat by simply running, gliding and grappling your way over the roofs. Sometimes I would just aimlessly explore the city this way ignoring all the objectives, and I must say it worked really well. 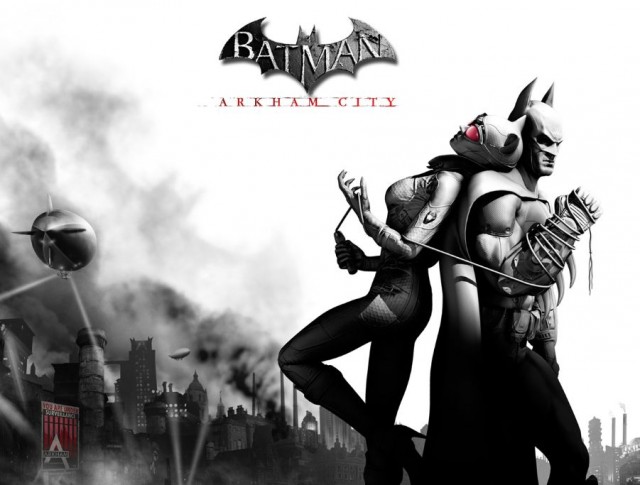 Arkham City also got better at the boss sequences. This time around, most bosses (with exception of Joker of course) can be eventually punched in the face, to your satisfaction. You even get to beat up the clown a bit at some point. Kill stealing, and running away at the last second is kept to the minimum in this one.

They even lampshade the plot driven unlocking of new Bat-accessories – Batman at one point comments he once tried taking a bigger accessory belt into the field, but it would weigh him down, and get in the way. Very nice touch if you ask me.

The mood is about the same as in the last game, if not darker. The plot is actually very decent, but I’m not going to talk about it much. Why? Because I would mostly be re-iterating the same points that Shamus made in his very eloquent and comprehensive post on this very topic. I don’t think I could explain why the excellent foreshadowing of the main plot twist worked so well in this game any better than he did. Furthermore, he covered all my plot related gripes (and then some) in his followup nitpicking post. So I can’t do that either.

What is left for me to say about this game then? Well, I could say it feels very… Video Gamey I guess.

I know, I know. It is a video game. Duh! That’s not my point. I mentioned this on Twitter before, but I don’t think I explained myself very thoroughly. It’s kinda hard to do that on Twitter. This has to do with immersion.

When I play games like Skyrim, Deux Ex or Mass Effect (for example) I get immersed in the game world and identify with my character. I’m Sheppard, I’m the Gray Warden, I’m Adam Jensen, I’m Skippy McPooperpants the crazy Khajit archer. I don’t think of the combat in terms of push-button-gimmicks but in terms of strategy, stealth, weapons and etc. Combat in Arkham City often breaks that immersion. When you do normal stealth sequences, and you get to silently take out the enemies one by one without being seen, the immersion is usually intact. When you fight hordes of enemies on the ground, it mostly works too. But boss battles ruin it.

Let me give you an example – when you fight Salomon Grundy the only way of defeating him is to use your detonation gel on the floor reactors that are reanimating him. This is a classic video-game gimmick straight out of a Mario game or something. When I think Batman, I don’t think blowing up floor things to needle down a life bar of a big, invulnerable boss. Almost all big battles are like that. Near the end of the game, most henchmen sequences get like that too. At that point every group includes a couple of shield dudes, and armor dudes who have to be taken out using a very specific combo.

Most of the time the game has really great free flowing combat mechanic that allows you to mix a lot of techniques – you can hit people and rack up combo points, and then use special moves. You can block and counter to stay almost invulnerable. You can stun people and hit them with flurries and etc. But when shield dudes, cattle prod dudes and armor dudes show up, they ruin everything. They break up your combos, they can’t be easily blocked and they can only be knocked in one specific way. I don’t know about you. but that always made me loose my immersion and start thinking about combat mechanics. Arguably, that’s not a good thing.

I guess some people like it. Some folks prefer their games to be challenging and like boss battles with clear repeat patterns. I personally am more of a story and immersion guy. I like to experience the game “as” my character, and not as an outside spectator waiting for another button-mashing puzzle like you wait on a buss that’s 15 minutes late. To me, this constant immersion dropping is the main weakness of the Arkham series. I like the stories they are telling, I like the setting, I like the mood and I like playing as Batman. What I don’t like is to be constantly reminded that I’m in a video game and I need to do some contrived actions that would not make sense in a comic or a movie.

How about you? Did you notice the same thing about this game, or am I full of shit on this? Did you think at least some of the boss battles could be more intense if they at least tried to keep you immersed in the story rather than resorting to classic video game gimmicks? Let me know in the comments.


One Response to Batman: Arkham City