I bought it, played it and decided it was not worth my money. That’s about the whole review. There is really not much to say about this game other than it really failed to deliver the entertainment I was hoping for.

Let me make this clear – this is not an ad hipsterium argument. I’m not being hard on this game because I played the first one (I didn’t) or because I liked the comic (did not even know that it existed until I saw it in-game) and now I’m raging at the changes. No, I bought this game on a whim because I was actually craving some fun gun-play entertainment, that is not brown, military oriented or multiplayer. This game seemed to fit the bill.

You play a long haired mafia dude with bad-ass daemon tentacles which you can use to rip opponents to shreds, while you shoot them in the face at the same time. The story is about the eternal struggle of good and evil, mafia wars, secret societies wielding mythical magics and and dudes with supernatural powers, and tentacles coming out of their butt. How could you go wrong with that? It seemed like a perfect way to get some single player FPS fun without feeling like I’m participating in a bro-out with some bros. Seemed like it would be fun. 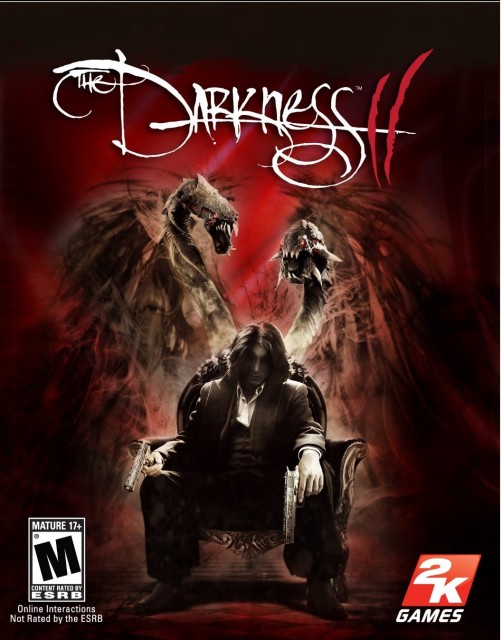 It starts off well. You are a big mafia guy, going out on a date with the twins from Duke Nukem or something. I’m not sure if they were the same models, but they had the same type of “animated corpse” look too them. Uncanny Valley turned up to the 11. I was profoundly uncomfortable as my character was making small talk with these disturbing undead entities, but thankfully they both got shot a few seconds later, splattering brain matter all over the camera lens. It was a huge relief. I don’t think I could have survived a pretend sexual encounter with these two virtual corpses – the opening of Duke Nukem Forever was horrible enough in that aspect.

So it turns out that someone put in a hit on you. A whole army of dudes storms into restaurant, sets it on fire and start shooting everyone. You know, regular Tuesday in mob-world. The point is, you get really fucked up in the firefight and you have no choice but to release a dark mystical force you kept bottled withing you for years. At that point two crazy tentacles slide out of your rectum, and start ripping people apart.

Soon you find out that the failed assassination attempt was perpetrated by some mysterious secret society, that has been trying to track down and steal your anal tentacles and the superpowers that come with them. So you go and you fuck their shit up, while you are having flashbacks of your dead girlfriend. Roll credits. Oh, and there is also an insane asylum subplot – between missions you sometimes wake up in a nut-house, where all the NPC’s you have encountered so far are either patients, orderlies, nurses or doctors. They all tell you you are not a crime boss, and you don’t have butt-mounted tentacles. It is actually really cool part of the game, but all in all the entire thing just feels short and rushed.

I had a whole 6 hours of fun with this game, and then it ended. That was it. That was all that I got. I beat the single player campaign in three evenings of very casual, brief game play. Hell, I barely had any time to figure out how to properly use all the supernatural powers in my arsenal. There is an RPG like element to the game, where you get to level up your powers as you go… But it is kinda pointless seeing how the game ends quickly and abruptly before you even get a hang of all your newly gained skills.

The worst part is that the story was not half bad. I actually enjoyed it. It wasn’t deep, engrossing or mind blowing but it was decent. The game does a pretty good job introducing non-combat NPC’s and making you care about them, so that they can be kidnapped or killed in the next scene. It works fairly well. The insane asylum bits were an interesting change of pace. I really liked the idea, though I felt the protagonist could have been a tad bit more confused and lost in these. I mean, the player knows this is a trick, but the character – he could have expressed some doubts about his own sanity, instead of being a massive tool. The love story told via flashbacks was handled quite well too. There was a natural flow to the entire thing, and I just wished there was more of it. The trailers and promotional footage made a big deal out of the stealth sections where you take control of your trusty, foul mouthed British imp – but there were only two of these, and both were plot driven and mandatory.

There is a multiplayer mode, which I did not touch because… Fuck multiplayer. Seriously. If I wanted some multi-person fun I would just launch TF2 or L4D. I bought darkness for the single player campaign and I was disappointed by how incredibly short it was. If you are like me, and you don’t care for the multiplayer mode, the game is definitely not worth the $40 that Steam sells it for. I would recommend waiting for the next big Steam sale and picking it up when it’s around $10-$15 because that’s what it is really worth. It feels like a DLC rather than a full game. It should have really been called The Darkness II: Episode 1, Part 1 or something like that.

This entry was posted in entertainment, video games and tagged review. Bookmark the permalink.


One Response to The Darkness II